The Ohio gunman described himself on social media as a pro-Satan “leftist” who wanted Joe Biden’s generation to die off, hated President Trump and law enforcement, and hoped to vote for Sen. Elizabeth Warren for president.

In the early hours of Sunday morning, rifle-wielding Connor Betts rampaged through a Dayton entertainment district, killing his sister and eight other people and leaving dozens of others wounded before police killed him.

“I want socialism, and i’ll not wait for the idiots to finally come round to understanding,” he wrote in one tweet, according to Heavy.com.

That makes stuff like this look not just indecent, but also silly: 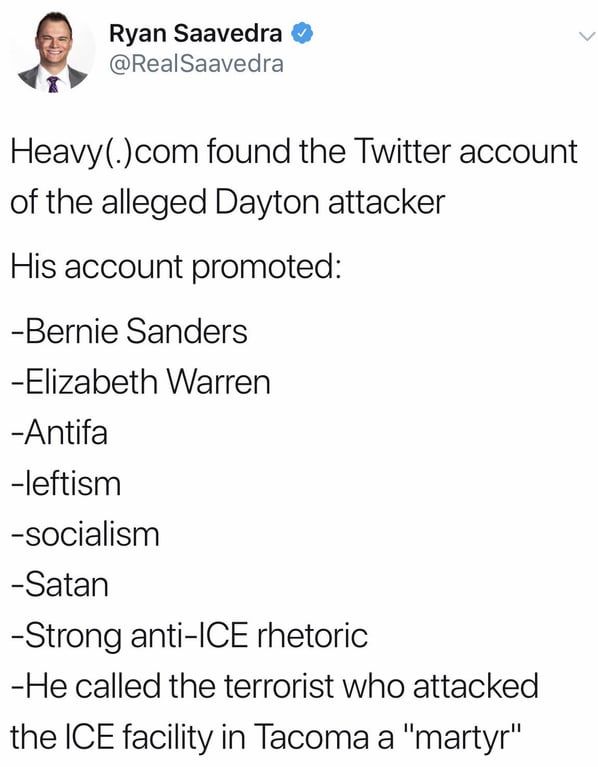 ROGER SIMON: From El Paso to Antifa to LA: America the Insane.

Predictably, Beto O’Rourke fairly sprinted down to his hometown of El Paso to blame Donald Trump for the city’s mass murders in the hope of reigniting the Texan’s failing presidential campaign. But if you read the gunman’s manifesto, you would find the murderer as much in agreement, possibly more so, with Elizabeth Warren and O’Rourke himself than with Trump. The shooter wants universal healthcare and a guaranteed income. He also wants to kill Mexicans and to partition the country into equal race-based sections, a kind of identity politics taken to the nth power, not that any of this matters. The man is clearly insane, as was the now-deceased Dayton killer who was reportedly a Democrat and a Satanist, planning on voting for Warren, as well as, of course, being mentally ill. . . .

This is obviously not politics in any rational sense, although we are hearing endless political statements from pols anxious to exploit the tragedy. It’s about craziness. An epidemic is sweeping the country and has been for some time. Mass shootings are only one manifestation, although arguably the most horrible and extreme one.

It may not immediately seem to be so, but the expanding homeless populations all over the streets of Los Angeles, San Francisco, and Seattle are another salient example. These people are hugely disturbed, unwilling to live in shelters, some quite well-equipped, that have been built for them. They prefer to live in tents more hospitable to their lifestyle that frequently involves drugs and to be left alone with their delusions while defecating on the sidewalks. Neighborhoods are being destroyed as a result.

And then there’s Antifa. Is running around in masked costumes smashing windows and beating people in the name of fighting “fascism” an example of sanity or derangement? Obviously the latter. Antifa is yet another tragedy waiting to happen. Their mirror images, white supremacist groups, are similar manifestations of severe emotional disturbance with obvious violent implications.

All these people and groups are connected by their high level of psychological disturbance. Their number is small, even tiny, compared to the total population, but our population is approaching a giant 330 million. If only one-tenth of one percent of that number is seriously disturbed, that’s 330,000 dangerous nut cases.