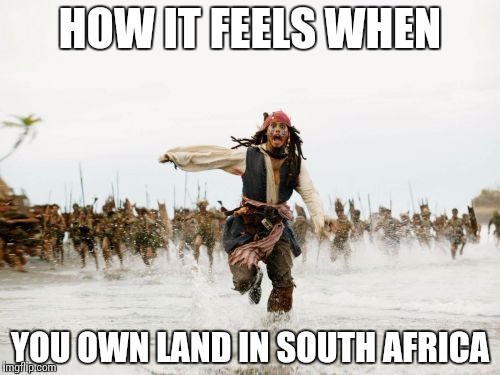 South Africa is walking the path of Zimbabwe, as its government has begun to literally steal white farmers’ land. The South African government calls this process “seizure”, yet it’s a confiscation by any metrics, because the farmers are not compensated for their loss. In recent weeks, ahead of planned land seizures by the feral black government, a lot of farmers tried to sell their lands, in a desperate move, yet there are no buyers, obviously, for even more obvious reasons.

Since the current South African prez Cyril Ramaphosa assumed office and vowed that his party, the African National Congress(ANC is  a communist movement by any metrics) respectively, is going to move on with land expropriation, tensions among South Africa’s farming community (mostly white, as you can imagine) have been rising.

“You shouldn’t own more than 25,000 acres of land. Therefore, if you own more it should be taken without compensation. People who are privileged never give away privilege as a matter of a gift. And that is why we say, to give you the tools, revisit the constitution so that you have a legal tool to do it.”

Interestingly enough, both black and white farmer unions condemned Gwede’s communist ideas, and predicted that following mass-scale land confiscations, South Africa’s economy will collapse and the country may no longer be capable of feeding its citizenry. The exact same thing happened to Zimbabwe  by the way, i.e. there’s enough empiric evidence to support the claim.

As per the boss of Agri SA union Omri van Zyl:

“The mood among our members is very solemn. They are confused about the lack of any apparent strategy from the government and many are panicking. So many farms are up for sale, more than we’ve ever had, but no one is buying. Why would you buy a farm to know the government’s going to take it?”

“From a practical and economical point of view it will not work. Land will be a central issue in the looming 2019 election year, and rhetoric is always easier than transformative action. AfriForum, an influential lobby group, recently warned the government its plans would be “catastrophic”.  Ian Cameron, the group’s spokesman, said: “We’re really heading for a state of anarchy if something doesn’t change drastically.”

The first two white-owned farms that were targeted by the South African government’s expropriation measures were game-farms in Limpopo, after the so-called negotiations with the owners failed. The owners asked for $18,7 million in compensation for the farms, yet the government offered a tenth of the requested amount, $1,87 million respectively. The farmers were not allowed to first dispute the claim in court, and that makes the Akkerland Boerdery case (the owners) very unique. Also, this is the first time when the South African government refuses to compensate the owners by paying market value for the seized land. Almost two thirds of the agricultural land in South Africa is owned by white farmers, and since the Apartheid ended in 1994, the ANC redistributed white owned farms to blacks using a “willing seller, willing buyer” process. ANC spokesman ZiZi Kodwa tried to calm things down and downplay the seizures-extravaganza by saying:

“Over time I think the markets, as well as investors, will appreciate that what we are doing is creating policy certainty and creating the conditions for future investment”

It’s worth mentioning that one fifth of South Africa’s farms produce 80 percent of the food, and most of those properties would be affected by the government’s proposed 25k acre cap. Zimbabwe’s land seizures from the 1990’s sent the country into chaos and economic decline, with many Zimbabweans seeking asylum in South Africa, of all places. Where will the South Africans go?

We all know how this is going to roll, right? Famine is on the horizon, and waves of immigrants are going to be let loose looking to flee into Europe and get free stuff. And somehow, it’s all whitey’s fault.

Here’s a quick history lesson for my regular readers, if I have one: despite the fake-news MSM narrative about “stolen” land, the Afrikaners (white colonists) never stole land. They traded and bought it from the rightful Indigenous people of a big part of South Africa. The Afrikaners abolished slavery long before the Bantus came down to South Africa. The Zulus and Brits exploited the Khoi and San people for slavery. Apartheid was real, yet many blacks who lived in that “era” said it was a hundred times better than it is now. Please look at Soweto under Apartheid and look at it now. Squatter camps are all over South Africa.

Also, consider this: how many years after some lands were taken/stolen/conquered/colonized/traded/bought or whatever, does it become legitimate?  In South Africa, the colonization by white Europeans happened 400+ years ago. If you see the current land ownership in South Africa as illegitimate and want to rewrite history there, then all Caribbean nations and the US -along with so many others- should be given to the native population too. Good luck with that.

Without the continuous intervention of charity into Black Africa, they could not even maintain what they have been given. All current Black civilization is in fact transplanted White civilization. There is not as yet a single Black society on Earth that has independently developed and maintained its own technological way of life.

FACT 1 – Who owns the most land in South Africa? The ANC – FACT 2 – The ANC only wants white owned land, which is a racist policy FACT 3 – No farm the ANC ever took-over was successful, they ALL, ALL, 100% failed – FACT 4 – No company the ANC is involved with works anymore, they are all bankrupt FACT 5 – The ANC are a useless, corrupt, far more racist government than the apartheid government, ever was, yet the liberals say nothing about the 400+ new race-based laws implemented in South Africa.

Moreover, there is a lot of Chinese interest in the country. A lot. They are going to pick all this stuff up quickly and cheaply, and pay off the government as well. But, unlike the white farmers, they don’t invest in farmland to provide for the local population. They will ship the produce back to China. And good luck trying to explain to the Chinese that they are racist if they don’t give the farmland back to the ‘original owners’. They don’t care, they have 1.5 billion mouths to feed, with increasing appetites.

The ANC owns more land than all the commercial farms put together, that is a fact. There is so much open land in South Africa, yet they don’t want to use that land. They only want productive (as in white-owned) farms. Robert Mugabe said the whites took the best, most fertile land in Zimbabwe, yet today we see that fertile land looks like a waste land…nothing grows on it. South Africa is a far more harsh climate to farm in than Zimbabwe. Communists don’t seem to comprehend the notion that a farm (or a business) is built with hard work and ingenuity, it doesn’t appear by magic or chance.

Europe must prepare for the next 40 million migrants heading their way. If South Africa falls, so will all the nations around South Africa. All those 40 million will head for Europe; nothing better than Karma for their sanctions , plus saying nothing during this thievery.

It will be interesting to watch this shit-show: either the media will completely ignore the elephant in the room, or they will have to acknowledge that Apartheid was the best thing for South Africa. South Africa supplied food, electricity to the surrounding African nations, yet  today they cannot even keep their own lights on, nor feed themselves.