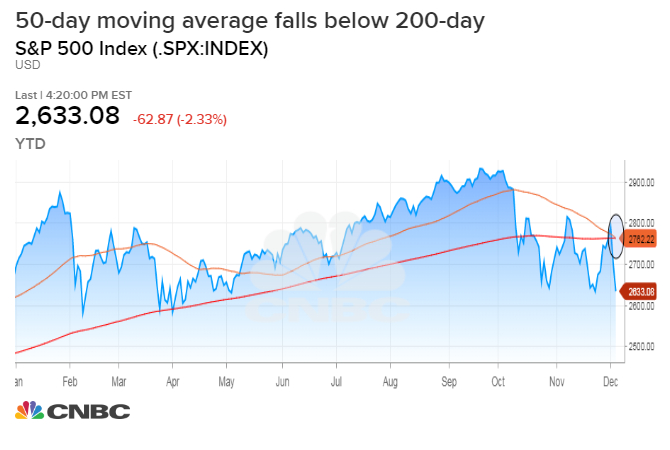 The chart of the S&P 500 Index is flashing a warning of more selling ahead.

A pattern, called the ‘death cross,’ appeared on the chart on Friday as stocks plunged. The S&P 500’s average price of the last 50 days, dropped below the 200-day moving average, a sign of negative momentum and possible change in trend, according to technical analysts.

“It just means you’re lower for longer, meaning there’s no real bounce, which is a sign of real selling.” said Scott Redler, partner with T3Live.com. “Sometimes you break moving averages and you get some kind of quick fast recovery…but when you stay down longer, all of a sudden it’s showing real selling. That’s why people don’t like the death cross. It’s almost confirming what could be a change in trend to the downside.”

READ  In One Chart: Two Decades of Stock Ownership in America

The S&P 500 is already down more than 10 percent from its record high earlier this year, officially a correction. Because of Friday’s rout, the benchmark is now negative for 2018.