Getting a degree is a surefire way to land a good paying job, and in general, earning more money means contributing more to the economy. But if going to college is such an obvious benefit, why do states contribute wildly different subsidies to public higher education? Our newest visualization illustrates the enormous disparities across the country. 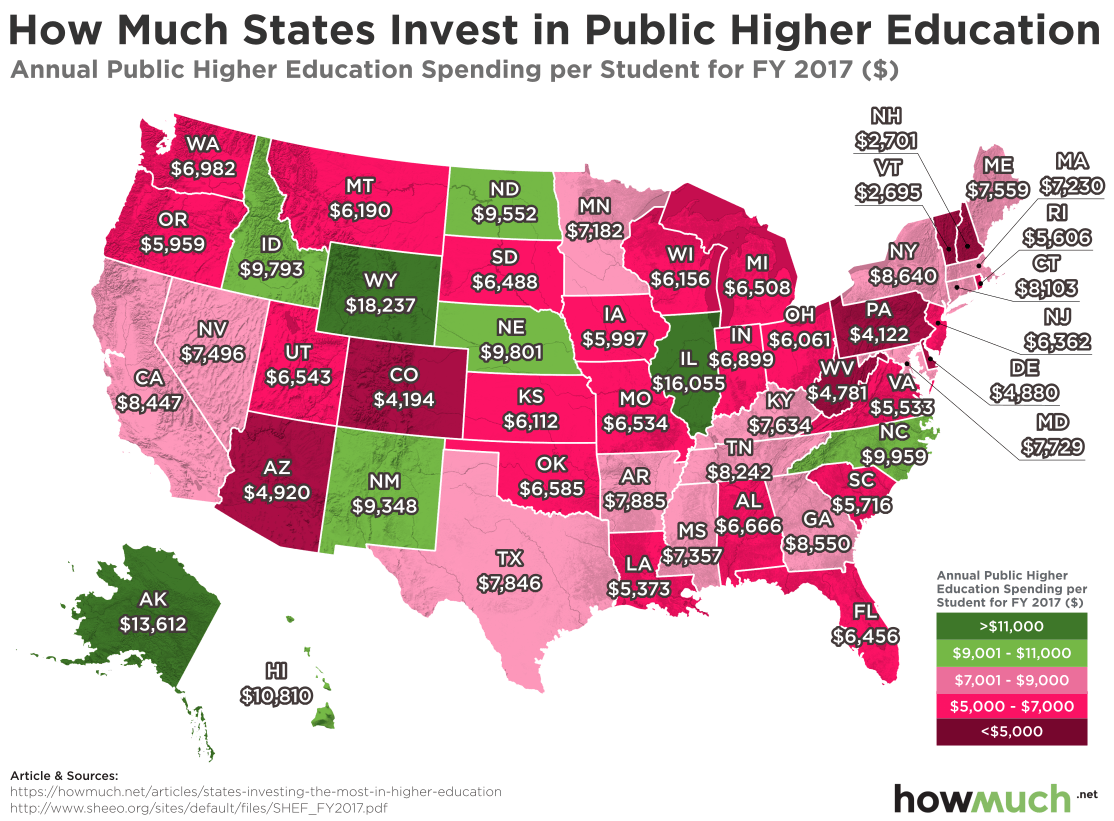 The State Higher Education Executive Officers Association (SHEEO) keeps track of state and local allocations to public universities and colleges. To be clear, the group certainly has a vested interest in getting government to contribute more money to its members’ institutions. The SHEEO calculated how many full-time equivalent students each state supports, then they tabulated the entire state and local assistance given to higher education in 2017. This gave us an average per pupil allocation, which we simply used to create a color-coded map of the U.S.

These are the top ten states spending the most money on a per pupil basis for higher education.

See also  Fed acknowledges the obvious: Inflation is higher than 2%

There are a couple key takeaways from our map. The first is that funding for public higher education does not conform to any neat pattern. State and local governments contribute as much as $18,237 (in Wyoming) or as little as $2,695 (in Vermont). Both rural states like Idaho and those with large cities like Illinois top the charts. From a political perspective, states with overwhelming state-level majorities on both sides of the political aisle can be found in the top ten. The only clear trend is that Western states tend to spend more on a per pupil basis than Eastern states.

But there is something insightful hiding just beneath the surface of our numbers. The states with more funding tend to have smaller populations. Illinois is an exception for very specific reasons related to the dysfunction of the state government’s inability to pass a budget in recent years. According to the SHEEO, Illinois allocated only about $12,000 last year, although much of that went toward unpaid bills thanks to missing funds from the year before that. States with smaller populations like Alaska and Idaho tend to have higher numbers only because there are so few students to divide the allocation.

So where is the best place to get a degree? Don’t simply consider state-level allocations. After all, tuition costs can vary dramatically from school to school and state to state. You should instead view higher education as a long-term investment in future earning potential. Check out our other visualization on which schools have the highest ROI to help guide your decision.