The stock market’s record-breaking run keeps going, but for how long?

John Templeton, the late investing guru, once said bull markets in stocks “mature on optimism” before they eventually “die on euphoria.”
Chalk up 2017 as another year of maturity for the current bull market — on a record scale.
Defying speculation 12 months ago that the years-long rally would be sorely tested during President Trump’s first year in office, the stock market has been riding a wave of continued optimism to repeatedly set fresh highs.
Analysts give Trump some credit for the gains, mainly for pushing the tax-overhaul plan passed by Congress last week and reducing regulations. But market trackers give most of the credit to several other factors, including global economic growth, stronger corporate profits, continued low inflation and rising consumer confidence.

“Looking at the economy and financial markets, it really doesn’t get much better than where we are right now,” Brad McMillan, chief investment officer at investment firm Commonwealth Financial Network, said in a note to clients last week.
Or, as outgoing Federal Reserve Chairwoman Janet L. Yellen said this month about the economy: “There’s less to lose sleep about now than there’s been for quite some time.”
Threats nonetheless remain, including ongoing political and trade tensions overseas, a possible pickup in interest rates and inflation, and the midterm elections that could change the outlook for stock prices.

Could the ‘curve’ be warning of a US recession?

The US economy may be basking in the warm glow of solid growth, but economists are nervously eyeing a trend in the bond market that could spell stormy weather ahead.
Even though President Donald Trump is touting unemployment at its lowest level in 17 years and Wall Street soaring to new heights, economists are worried about one indicator that is often a harbinger of recession: the yield curve.

“Since 1950, each recession has been preceded by a reversal of the yield curve,” said Christopher Low, chief economist of FTN Financial.
This closely scrutinized graph maps the difference in yield, or return on investment, of short- and long-term US Treasury debt, usually comparing two-year notes to 10-year bonds.
Normally, the shorter the investment, the lower the yield, and conversely, the longer the investment, the higher the return, to offset the greater risks of losing access to funds for an extended period.
But for the past year, the yield curve has been flattening as the return on short-term debt has been getting close to long-term yields, possible signaling eroding confidence in the economy’s performance in the coming years.
The spread between the yield on two- and 10-year Treasury paper fell from 135 in December 2016 to 51 basis points on December 15, the lowest since October 2007 — just before the start of the global financial crisis.

The most insane chart registers at extremes. 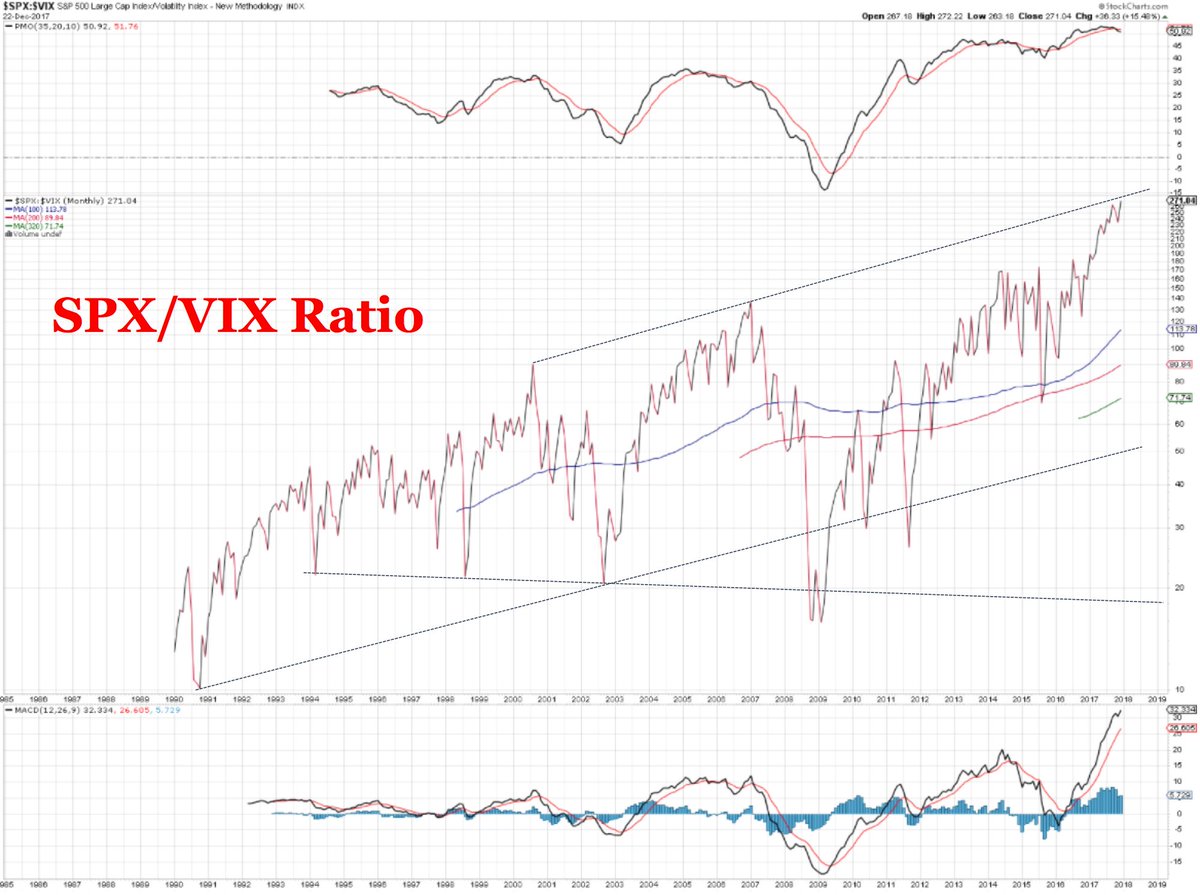 1 thought on “Stock market record-breaking run keeps going, but for how long? Could 'curve' be warning of recession? The most insane chart registers at extremes…”