Wolf Richter wolfstreet.com, www.amazon.com/author/wolfrichter
Are we blinded yet by the brilliance of corporate earnings?
“Adjusted” earnings growth is 10.2% year-over-year in the second quarter, according to FactSet, based on the 91% of the companies in the S&P 500 that have reported results. The energy sector was a key driver, with 332% “adjusted” earnings growth from the oil-bust levels of a year ago.
The sectors with double-digit earnings growth: information technology (14.7%), utilities (10.8%), and financials (10.3%). The rest were single digit. Earnings in the consumer discretionary sector declined.
Revenues grew 5.1%, also led by the energy sector. At the beginning of Q2 last year, the WTI grade of crude oil traded at $35 a barrel. In Q2 this year, WTI ranged from $42 to $53 a barrel.
So the Wall-Street hype machine is cranking at maximum RPM to propagate the great news that earnings are soaring, and that this is the reason why stocks should also be soaring, and forget everything else. The hype machine carefully avoids showing the bigger picture which is dismal for earnings and ludicrous for stock valuations.
Aggregate earnings per share (EPS) for the S&P 500 companies on a trailing 12-months basis rose for the second quarter in a row. That’s the foundation of the Wall Street hype. But here’s the thing with these EPS: they’re now back where they had been in… May 2014.
Yep. More than three years of earnings stagnation. No growth whatsoever, even for “adjusted” earnings. In fact, on a trailing 12-month basis, aggregate EPS of the S&P 500 companies are down about 5% from their peak in Q4 2014. And yet, over the same three-plus years of total earnings stagnation, the S&P 500 index has soared 34%.
This chart shows those “adjusted” earnings per share for the S&P 500 companies (black line) and the S&P 500 index (blue line). Chart via FactSet(click to enlarge). I marked August 2012 as the point five years ago, and May 2014: 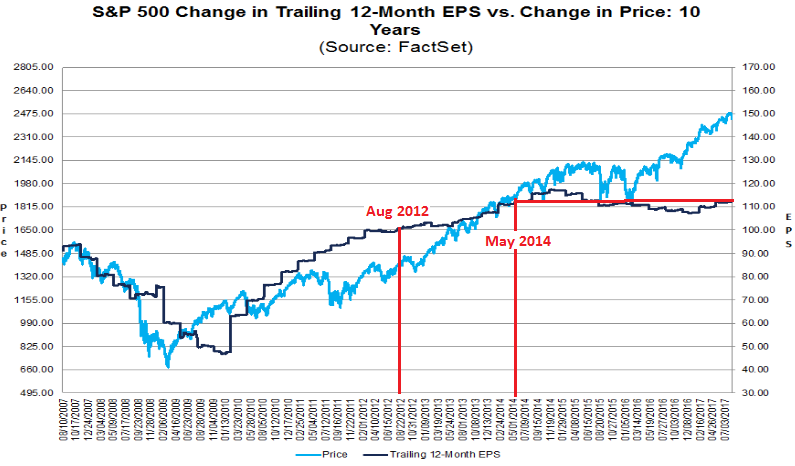 And these are not earnings under the Generally Accepted Accounting Principles (GAAP). FactSet uses “adjusted” earnings for its analyses. These are the earnings with the bad stuff “adjusted” out of them by management to manipulate earnings into the most favorable light. Not all companies report “adjusted” earnings. Some only report GAAP earnings and live with the consequences. But others put adjusted earnings into the foreground, and that’s what Wall Street dishes up.
Since August 2012, the trailing 12-month “adjusted” earnings per share of the companies in the S&P 500 index rose just 12% in total. About the rate of inflation – nothing more. Over the same five years, the S&P 500 Index soared 72%.

And there’s another thing: these earnings per share are heavily influenced by the share count. Companies have been on a huge borrowing binge over these years, fueled by historically low interest rates, and a big part of that borrowed money wasn’t used to create new things, expand, invest, or invent, but to buy back their own shares. This type of financial engineering lowered the share count, and thus artificially increased earnings per share. Growth in EPS due to financial engineering is fake earnings growth.
This is the peculiar situation of today: On average, these companies have stagnating earnings per share propped up by “adjusting” these earnings and by financial engineering. The price-earnings multiple (P/E ratio) for stagnating companies should be low. In January 2012, the P/E ratio for the companies in the S&P 500 index was 14.9. And that was high. As of Friday, the aggregate P/E ratio is 24.3: 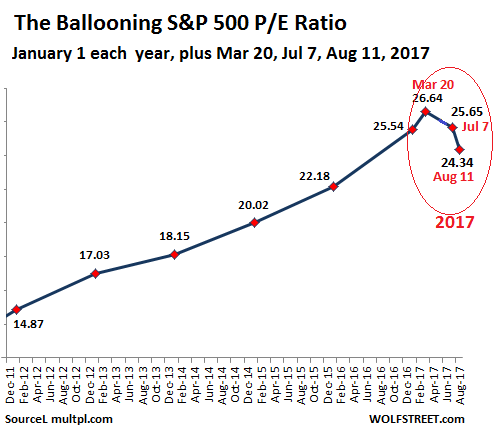 But look what happened. The P/E ratio peaked in March at 26.6. Since then, the S&P 500 has ticked up 3% and earnings have risen to this glorious level Wall Street has been hyping and the P/E ratio has come down a wee tiny bit…. back to where it had been in the fall of 2016.
In the five-year picture, earnings per share – however doctored they’d been – expanded just 12%. But share prices skyrocketed 73%. And thus the P/E ratio soared. These phases of “multiple expansion” are part of the stock market’s boom and bust cycle. They’re invariably followed by periods of multiple contraction.
Multiple contraction doesn’t stop at the average long-run P/E ratio but falls far below it, because that’s how the long-run average P/E ratio is formed: by periods far above the average (right now) and by periods far below the average. In the past, this type of multiple contraction from the top of the range to the lower end of the range – the process of “reversion to the mean” – offered some hair-raising rides for the stock market overall and for ludicrously overvalued stocks in particular, with many money-losing companies not making it to the next phase.
No one knows the date when this process kicks off in earnest, though everyone wants to know it so they can scurry out of the way beforehand. But when enough folks are trying to scurry out of the way, they’ll will precipitate the beginning of that process. That’s always how it happens.

READ  Warning to America: The Greatest Depression of All Times Approaching Worse than 1929 : Be Prepared!
READ  Warren Buffett weighs in on the Buffett indicator which has been warning about the stock market
1,142 views