After ballooning relentlessly for six years straight, C&I loans have now been stalled for four months in a row. They edged down to $2.1 trillion in the week ended February 15. That’s where they’d first stood on October 19.
2. Auto production is falling sharply

Heavy inventory is a signal of potential pressure on automakers’ profits, it also boosts costs for dealers, which pay interest on inventory as well as any extra expense to store vehicles.
Production cutbacks also have already begun. GM and Fiat Chrysler have eliminated shifts, laid off employees or scheduled days off early this year at plants making slower selling models.
3.The Fed is embarking on a path that usually ends with a recession

Fed Chair Janet Yellen has signaled just recently that a March rate hike is on the table and said the pace of the Fed raising rates in 2017 would likely exceed that seen in 2015 and 2016. And while an accommodative Fed has been seen as a backstop for markets during the post-crisis bull run higher, a tighter Fed is bad news for stocks because when rates begin to rise, the end of the bull market has already been signaled. According to David Rosenberg at Gluskin Sheff “there have been 13 Fed rate hike cycles in the post-WWII era, and 10 landed the economy in recession. Soft landing are rare and when they have occurred, they have come in the third year of the expansion, not the eighth.”

Source: finance.yahoo
4.27 months until this becomes the longest expansion in history!

This will become the longest expansion in U.S. history after 27 months.

A troublesome indicator has emerged in the Oil and Gas sector confirming that not all is well on the demand side. The latest evidence comes from a recent report by Deutsche Bank which shows that the number of miles driven in the US is not only slowing, but in December, it posted the smallest monthly increase since November 2013.

According to Moody’s Investors Service, the number of U.S. retailers ranked at the most-distressed level of the credit-rating spectrum has more than tripled since the Great Recession of 2008-2009 and is heading toward record levels in the next five years. The 19 issuers on Moody’s list have more than $3.7 billion of debt maturing in the next five years, with about 30% of that total coming due by the end of 2018.

7.Citi’s Matt King: “We Think You Should Sell”

Having taken a several month sabbatical, the bearish Matt King is officially back: “To sum up, markets seem increasingly to be pricing all of the upside and none of the downside. When there was a risk premium in spreads, and when a wave of central bank and private credit creation seemed likely to carry everything tighter regardless of underlying fundamentals, we were happy to run with that. But we think that risk premium has long gone, and that markets’ strength owes more to those technicals than is widely recognized.”

8.”The Retail Bubble Has Burst”

Cheap debt created a massive retail real estate bubble that is now bursting right before our eyes. The biggest losers in this retail melt down will inevitably be the investors in America’s massively levered REIT companies. In fact, the latest note from one of the world’s most vocal mega-bears, Horseman Capital’s Russell Clark, perfectly summarized the slow-motion train wreck that is currently wreaking havoc on mall REITs in a note titled “Mall Rats“: “Intriguingly we have started to see volumes of real estate transactions for shopping malls fall. This means that the number of transactions to buy or sell properties is beginning to decline. Last time this happened, rents began to fall a year later.

9.US Treasury Receipts Down Y/Y For 3rd Straight Month. 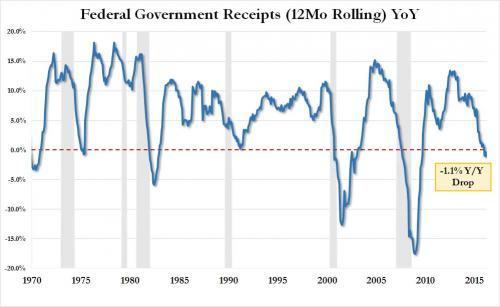 The slowdown is especially acute in the all-important for growth Commercial and Industrial loan category, which after growing at a pace of 10% in the first half of 2016, has suddenly and unexpectedly tumbled to just 4.0% as of the latest week, nearly 50% lower than the 7% growth notched at the start of the year.  This is the lowest pace of loan growth since July of 2011.

2 thoughts on “Ten Factors That Indicate How The Nightmare Of An Imminent Recession In The US. Is Quickly Turning In To Reality”