In the first quarter of 2019, the total private and public debt of the United States hit a record $70 trillion, raising concerns about the possibility of widespread defaults. Non-financial corporate businesses hold about $9 trillion of that debt. What companies are holding the most debt, and which are more concerning? 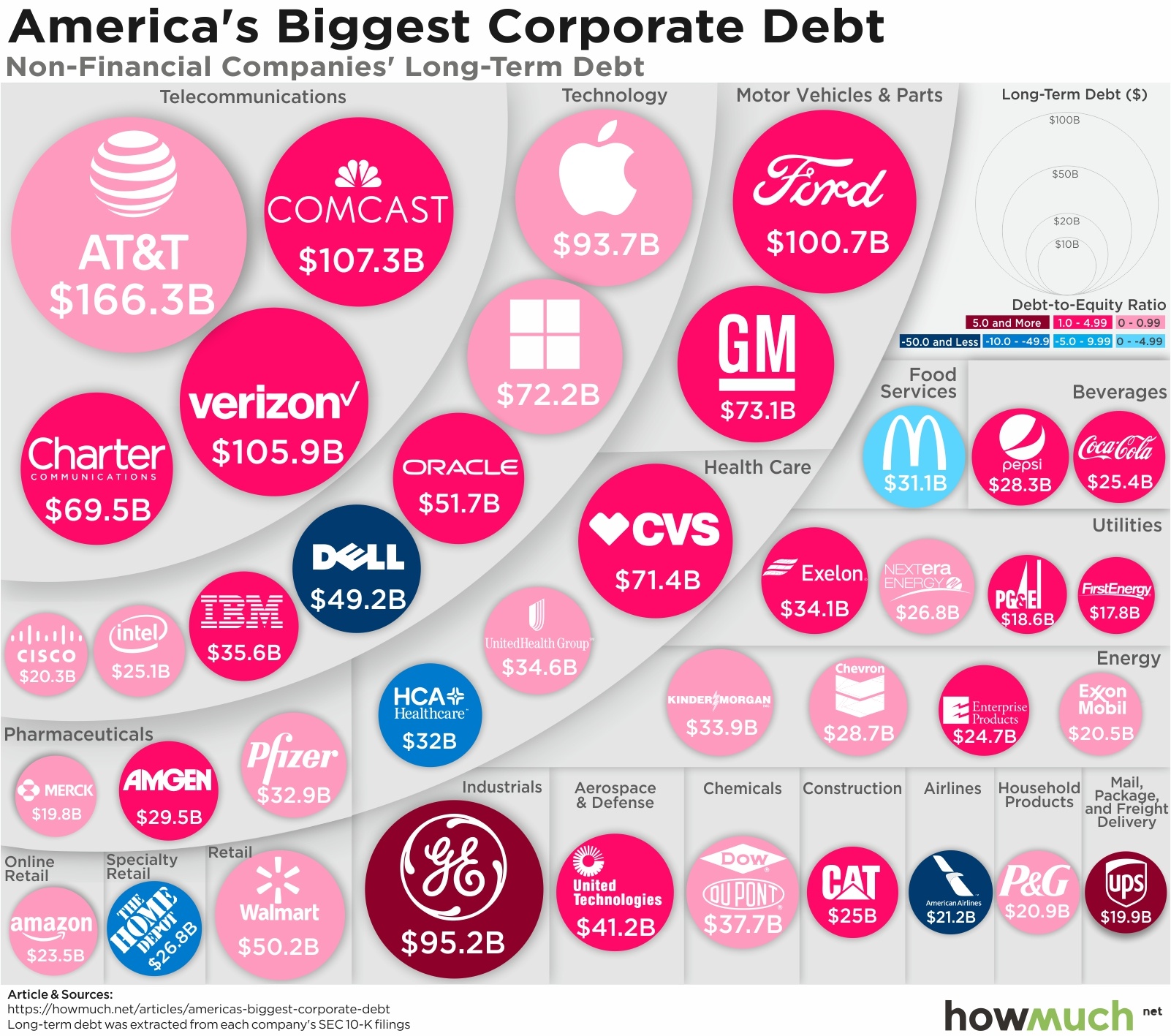 The data comes from 24/7 Wall Street’s analysis of the long-term debt for companies in the Fortune 500 with data from each company’s SEC 10-K filings. Long-term debt is any financial obligation that matures in more than one year. The data excludes financial companies, as the usual amount of debt for these firms is much higher than for non-financial firms. The companies are grouped by industry in the viz. A larger bubble indicates more long-term debt, as indicated by the legend.To put this debt into context, we also look at the debt-to-equity (D/E) ratio. The D/E ratio is calculated by dividing a company’s total liabilities by its shareholder equity.

Top 5 Companies With the Most Long-Term Debt

This is used to measure how a company is financing its operations and how capable the company is to cover its debts in the event of a business downturn. A higher D/E ratio indicates a higher risk for investors, as in the event of bankruptcy, they are less likely to have their investment returned. In fact, the standard debt load for a company ranges widely across industries outside of finance, and this context is helpful for understanding the data.

The viz lets us look at debt levels and D/E ratios to get a better look at each company’s total debt burden. Companies are grouped by industry as what constitutes a normal level of debt varies by industry. Capital-intensive industries such as manufacturing tend to have D/E ratios above 2. Companies in these industries have more assets to use as leverage in the event of a business downturn, which allows them to safely take on more debt. In contrast, service-based and tech firms often have a D/E ratio under 0.5.

This distinction is clear in the viz: automotive and telecommunications firms have tend to have higher D/E ratios than tech firms. While Microsoft and Apple have nearly as much long-term debt as Ford and GM, their D/E ratios are much lower, because of higher shareholder equity.

Earlier we mentioned that this analysis excludes financial companies because of the high levels of debt that are normal for that industry. This makes sense, then, that two of the top five companies by D/E ratio operate significant financial-services operations: GE and Ford. While it is true that both of these companies are capital-intensive to begin with, GE Capital and Ford Credit, respectively, are large contributors to the overall debt of each company.

Should any of these debt loads worry investors? Are they justified? What surprised you about the data? Leave a comment with your thoughts.