The global slowdown has been much discussed lately. A slowdown in Europe and China was considered to be the main reason for the December stock market rout combined with the balance sheet normalization (QT) program of the Federal Reserve. What is behind the slowdown?

No satisfactory answer has emerged, though China’s efforts to curb excessive lending are a natural candidate, in addition to the fact that central banks have been removing stimulus. The answer, however, goes deeper into the structure of modern economies.

We will show in the March issue of our Q-review that the world economy never actually recovered from the financial crisis, and explain the reasons why. The failure of the economic drivers of global growth, China, the Eurozone and the US, is at the heart of the non-recovery. We will delve into that here.

In June 2017, we noticed that something strange was going on in the global economy. The growth of total factor productivity (TFP) had stagnated starting in 2011. This is something that should not happen in a growing economy.

TFP is the measure of that part of GDP growth that changes in the quality and quantity of investments and work force cannot explain. It’s generally thought to be the measure of technological change driving economic growth. If it stagnates, it means that production is not becoming more efficient. That is, the achieved production is just the sum of capital and labor. Stagnation thus implies that our ability to create productive innovations has halted. A serious omen, and yet this is exactly what has happened since 2011. Why?

The Three Kings on a journey down

When the global economy falters, you turn to its leaders to look for blame. At the end of 2017, China, the euro area and the United States accounted for some 51 percent of the global GDP. They were the undisputed engines of global growth.

After the GFC, leaders of Europe, China and the United States enacted exceptional measures to “save” the global economy. These kept many insolvent banks and companies operating thus intensifying the zombification of the global economy. However, the GFC also led to a fall in the investment rate in the euro area and in the US (see Figure 2). Their gross formation of physical capital fell by several percentage points and it has never recovered.

Figure 2. Formation of gross physical capital in China, euro area, and in the United States in constant (base year: 2010) US dollars. Source: GnS Economics, World Bank

The capital formation in China has kept its (very high) rate. There, however, the problem is that investments have grown increasingly unproductive. Figure 3 shows the TFP growth of China, the euro area and the US. It shows that since 2011, the productivity of China has actually fallen despite heavy investment levels. This has led to an even more intractable problem, over-indebtedness, because the revenue from the investments has not been sufficient to service the debt. 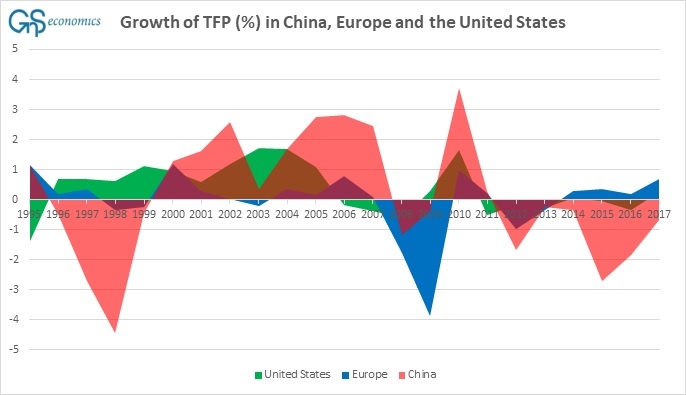 Figure 4 shows the combined private and government debt and the real GDP of China since 1995.[1] From 1995 till 2007, the overall debt in China grew only fractionally faster than GDP, as it should. However, between 2008 and 2017, the real GDP of China grew by around 7.6 trillion US dollars, but private and government debt grew by an astonishing 25 trillion US dollars. That is, during those nine years, the debt in China grew faster than GDP by a factor higher than three! There are no parallels in modern history, and it prompts an uncomfortable conclusion. 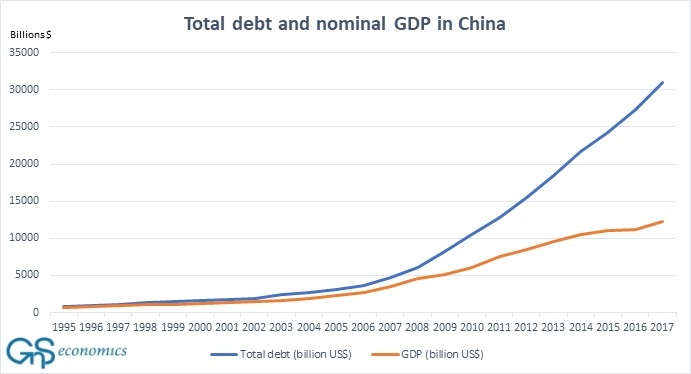 The Chinese economy has become a Ponzi.  It cannot sustain itself without a continued harrowing rise in debt. Halt the growth in debt and the real economy will tumble, and that’s what we have seen recently.

See also  A historic collapse in Chinese Equities. Traders are dumping everything – fearing "nothing is safe". A matter of time before it spills over into the US market?

If it’s broken, you might want to fix it

The fact is that something has gone seriously wrong in the model of global economic governance that has been in place since the Second World War. It may have never worked the way the macroeconomists envisaged it to work, but clearly it is not working anymore.

In the March issue, we will explain in detail, based on data and academic research, why the model of global governance has failed. It should be heeded closely, as the fragility of the global economy creates the possibility of a global crash, as we have warned since March 2017. Most likely, it’s too late to avert the global crash, but one can always prepare. We will return to that in more detail in June.

Based on what has happened in the global economy, one should be extra careful when calling for more stimulus. It will most likely not benefit the real economy, but it is likely to propel over-valued asset markets even higher. The unfortunate fact is that when asset markets go, the fragile global economy will go with them. The trap has been set.

Annual subscription of our quarterly reports, Q-reviews, where we map out the risks and forecasts for the global economy, the US and the the Eurozone, is available at €325 (+ VAT). The price includes 4 reports and access to all older reports. See the terms and conditions. Buy Now

[1] Note that the figures do not fully account the so called shadow banking sector, which implies that the overall debt growth may have been even higher. See our blog: The Gray Rhino known as China for more info.