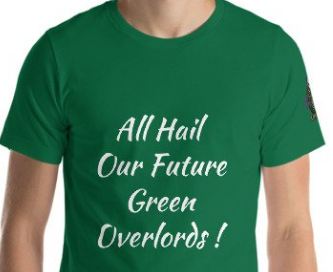 There is an undertone lurking behind the rise of Donald Trump in the US, the Brexiteers in the UK, Marine Le Pen in France, political re-alignments in Denmark, and the election of Jair Bolsonaro in Brazil. Additionally, there is the change in governments in Mexico, Malaysia, and the civil unrest in Romania. They are all joined by the sudden rise of the “Yellow Vests” in Paris, who are spreading internationally. The combination of these events show that an increasing number of people are fed up with who many call the “Green Overlords.” They have been out to reduce population and the living standard of the average person. There is a general rise in civil unrest, which is driven by decades of raising taxes on the tax payers and destroying the retirement of people who worked their entire lives. The middle class has been battered by the Green movements who are sheltered, enjoying the air conditioned and heated offices of the UN and Greenpeace.

READ  PEOPLE ARE ANGRY ALL OVER:

These Green elites have become known as the “Green Overlords” and have been supported by people like Al Gore, the Clintons, Obamas, corporate media pretending to be the free press, and of course Hollywood. In Europe, they have imposed taxes per head on cows and a 2020 deadline to move to electric cars. Their European champions have been Merkel in Germany; Prince Charles, former PM David Cameron, the BBC in Britain, and Macron in France. In Canada, Trudeau imposed a $1,000 global warming tax per home/apartment. Many have seen being Green as a justification for more tax revenue.

This group of Green Overlords has created a powerful global network to wage an endless war on the on the combustion engine as well as coal and nuclear power. They are reversing the basic, cheap, reliable electricity that the entire world has relied upon. They have attacked farmers and fishermen in a real effort to reduce the food supply in hopes of reducing population growth. They take their theory from mice who are known to have fewer offspring when the food supply declines. They have waged a war to tax the diesel vehicles. All of this has reduced jobs, and then politicians believe that allowing the importation of “refugees” will increase the tax rolls. They have waged a war and conquered schools and universities to instill their propaganda in the minds of the younger generation. They even created environmental degrees for jobs that do not exist. Their global warming dogma has taken over the government, the media, and education to push their agenda. The rise of the Yellow Vests is clearly a direct confrontation against this Green agenda.