This is the predictable path because it’s the only one that’s politically expedient and doesn’t cause much financial pain until it’s too late to stave off collapse.

While many fear a war between the nuclear powers or the breakdown of civil order, I tend to think the Crisis of 2023-26 is more likely to be financial in nature.

War and civil breakdown are certainly common enough in history, global/nuclear war has been avoided in recent history, largely because wars are typically launched by those who reckon they can win the war. Launching a nuclear strike against a nation with the ability to launch a counterstrike (from submarines, for example, and missiles that survived the first strike) guarantees the destruction of whatever concentrations of population and assets the attacker may have.

The breakdown of civil order has not occurred in developed-world nations for quite some time, as central states can marshal military forces to restore order and issue / borrow money to buy the compliance of the restive populace.

Financial crises, in contrast, remain a constant feature of the modern era, and developed-world nations are perhaps even more vulnerable to financial disorder than developing nations.

As I’ve often noted, systems tend to follow an S-Curve of rapid expansion followed by slower growth during maturity and culminating in stagnation, decline or collapse.

Successful economies generate a double-bind once they reach the stagnation-decline phase: the populace (and capital) both expect strong permanent growth as a birthright, and they see the previous boost-phase and maturity phase as evidence that the economy “should” continue delivering outsized returns on capital and widespread prosperity essentially forever.

They are willing to accept a temporary slowdown/decline as part of the process of prosperity, but their patience quickly runs out if outsized returns and general prosperity aren’t forthcoming.

The stagnation phase has many causes: a reduction in resources or depletion of soil/water resources; a sustained shortage of energy or a sharp rise in the cost of energy; stagnating productivity, and the rise of parasitic elites, insiders who feather their nests at the expense of the many.

All of these factors act as friction in the system, and eventually the system is unable to sustain the parasitic elites, high returns on capital and general prosperity.

Any political elite that delivers the bad news that prosperity is over risks being overthrown or voted out of office, and so the ruling elites seek to extend high returns on capital and general prosperity by any means available.

Since they are the parasitic elites, eliminating that source of friction is off the table. Restoring depleted soil/water/energy resources is not possible, and wresting control of others’ resources to exploit is problematic: using force might trigger a wider war, so buying others’resources is the safer answer.

Modern states create new currency by either digital “printing” or borrowing the money into existence. There is little political resistance to creating new money to buy others’ resources, generate high returns on capital and deliver direct transfers of cash to the populace via “make work” employment, social welfare, Universal Basic Income, etc.

You see the double-bind: the ruling class must deliver outsized returns on capital and general prosperity, and the only way they can do so is to create new money rather than new wealth, something that is beyond their power.

Depending on the wealth and productivity of the existing economy, the world may accept this new money as having value for a time. But as the need for more currency increases, ruling elites start to “print” or borrow new currency in excess of what the economy actually generates in income and value.

Eventually the world catches on to the stealth devaluation of the money, and trust in the value of the currency drops, slowly at first and then precipitously.

In developed economies, the ruling elites protect their own incomes and power, and those of capital, as the owners of capital are part of the ruling elite. The net result of this is rising income/wealth inequality as the few increase their share at the expense of the many. (Thomas Piketty characterized this process as a higher rate of return on capital than on labor.)

The political “solution” to stagnation and inequality is QE for the People:increased infrastructure and social welfare spending, benefits that are now costly being subsidized by the state (healthcare, higher education) and Universal Basic Income.

Proponents rarely (if ever) question the bloated cost structure of these protected industries, which benefit entrenched elites (i.e. parasitic elites) at the expense of the overall economy.

Proponents of QE for the People have convinced themselves that essentially unlimited sums of new money can be created and distributed without generating inflation, since all the newly created trillions will be boosting “aggregate demand,” i.e. more consumer demand for more of everything, including resources that are depleted/scarce.

This belief that creating and distributing trillions in new money isn’t inflationary is necessary to suppress the common-sense view that inflation is inevitable once money-creation (and broad distribution of the new money) kicks into high gear.

Since the ruling elites have no other choice, they will embrace QE for the People and generate new money with abandon.

I am guessing the political movement demanding QE for the People will come to power by 2021. The money creation will begin in earnest and a few years later, inflation will start rising, much to the surprise of proponents of QE for the People.

At that point the proponents and the ruling elites will be trapped: they won’t be able to withdraw all the benefits (“free money”) of QE for the People, nor can they reverse runaway inflation without drastically reducing the creation of currency.

Various politically expedient policies will be tried–wealth taxes, the issuance of a new currency, perhaps even a state cryptocurrency–but none of these can reverse the underlying dynamic.

The currency devalues and then collapses, along with the “wealth” that it represented.

This is the predictable path because it’s the only one that’s politically expedient and doesn’t cause much financial pain until it’s too late to stave off collapse. 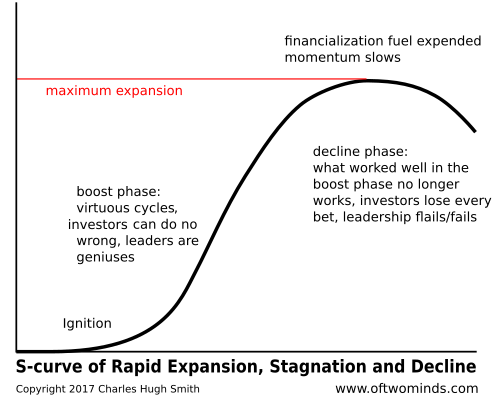