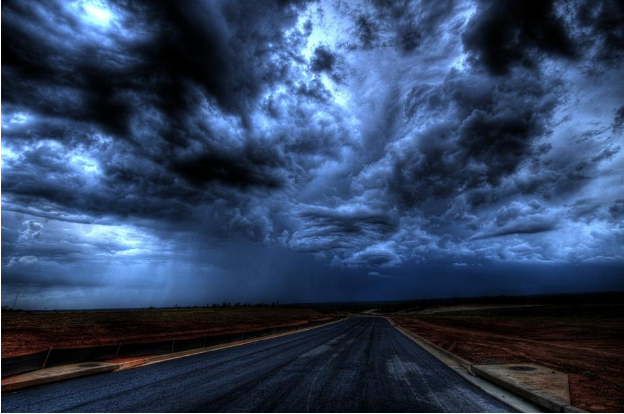 There are a number of growing storm clouds overhead. The U.S. economy is undergoing the beginning of a calamity that will only accelerate into 2019 when the rain will start to fall on what will be a very cold winter, likely worse than 2008.

Red lights have been flashing in our housing market for some time. The decline of home prices and dipping home sales have been brought on by rising interest rates and lack of wage growth. The stock market correction is turning into a real bear market, buoyed by the fall of FAANG tech stocks. Layoffs from a number of large companies are a sign of things to come with GM, Ikea, and Wells Fargo the largest and latest examples. The trade war and tit-for-tat tariffs with China surely bring down the entire global economy at some point and U.S. GDP is poised to drop significantly in the fourth quarter. To top it all off, our future does not very look bright because old people (65+) will outnumber children (under 18) for the first time in our nation’s history.

THE POPPING HOUSING BUBBLE FROM THE BAY AREA TO BOSTON

The housing boom we’ve seen during this now 10-year cycle is finally coming to an end.

In Dallas, the housing market is suffering with high-end subdivisions in affluent suburbs cutting prices on new homes by as much as $150,000. On one street in Frisco, $4 million of new homes were empty with no prospective buyers in sight. Home builders are getting desperate and offering outlandish incentives like Louis Vuitton handbags or Super Bowl tickets to attract agents with buyers to their properties.

The housing market makes up a sixth of the U.S. economy and has been showing signs of fraying for months now. Existing home sales in the U.S. have declined on an annual basis for eight straight months, the longest streak in more than four years, according to the National Association of Realtors. This slowdown has been most apparent in high growth metro areas like Seattle, Denver, New York, Boston, and the Bay Area.

Going back to Dallas, which has seen hundreds of thousands of new jobs in just the last few years and enjoyed the second-strongest annual increase in employment in the country in September, job growth has not been enough to sell the new homes coming to the market. Wages simply have not kept up with rising home prices. Add on top of that rising mortgage rates and the pool of buyers gets smaller with each new rate hike. Since the start of the year, mortgage rates have risen a full percentage point, putting it at the highest level since 2011.

Ben Jones, publisher of TheHousingBubbleBlog, is quite pessimistic about home prices in major U.S. markets. “I can’t think of a market in the United States I would buy in right now,” Jones said on a recent Peak Prosperity podcast. “We’re going to see a collapse. The housing bubble is in the process of popping right now.”

Home price growth across the country has slowed to the lowest rate since Trump was elected. The slowdown in home price appreciation was 5.15 percent year-over-year in September, according to the Case-Shiller 20-City Composite Home Price Index, the lowest gain since November 2016. Home prices have slowed for the sixth month in a row, according to Case-Shiller, but all 20 cities still showed annual gains, led by Las Vegas with 13.5 percent and San Francisco at 9.9 percent.

In my former home of Seattle, prices fell 0.3 percent from the month before and annual gains have dropped to 8.4 percent, down from double digit increases earlier in the year in the Amazonian city. San Diego was the only other city to record a month-over-month drop at 0.1 percent. New York had the weakest annual gain at 2.6 percent while Washington DC was the second-lowest posting 2.9 percent.

Mainstream economists are finally waking up to the fact that the housing bubble is finally popping. “Home prices plus data on house sales and construction confirm the slowdown in housing,” said David Blitzer, chairman of the S&P index committee, in a statement. A national coalition of real estate agents, academics, and real estate investors and developers are joining in with Trump demanding that the Fed put a hold on rate hikes.

STOCK MARKET CORRECTION AND THE FALL OF FAANG

If you own Facebook, Apple, Amazon, Alphabet/Google or Netflix this year, you watched in horror as the record highs of earlier this year were erased over the last couple months. While these tech titans have been sound bets in recent years, the stocks have fallen dramatically as the bears overtake the bulls at this late stage of the cycle.

Since the summer, these five tech giants have combined to lose some $1 trillion in market capitalization from their peaks. FAANG stocks are now officially in bear market territory. Investors have blamed interest rates and bubble-like valuations as reasons for the drop. A bear market is generally defined as a 20 percent or greater decline from recent high prices. Facebook and Netflix have been there for months (I know this all too well as I got into Netflix too late and have lost all that I initially invested, but I’m still young and can ride the volatility of the stock market for now). Apple was the final holdout losting 24 percent from its peak set in early October and briefly ceding to Microsoft as the most valuable U.S. company earlier this week.

JOB LOSSES FROM LARGE EMPLOYERS A SIGN OF THINGS TO COME

The U.S. is set to throw tariffs on $200 billion of Chinese imports as the Trump administration has failed to reach a trade agreement with China and the president shows no signs of backing down to our massive trading partner across the Pacific Ocean. The successful negotiation of the new NAFTA agreement should mitigate some concerns with the escalating trade war, but the trade showdown with China remains a number one concern moving forward.

The clouds you see overhead this quarter are the gathering storm. While it won’t start to pour just yet, you’ll start to feel some sprinkles as we get closer to Christmas. The effect of the tariffs is hard to predict and won’t be fully realized until the first or second quarter of next year at the earliest, assuming Trump proceeds with the additional tariffs. A recession will be on almost every economists’ radar next year because of the troubles I’ve mentioned above in addition to other concerns (stagnant wage growth, labor force participation, productivity). The Fed will likely enact one more interest rate hike before the end of the year, which could throw a wrench into everything and accelerate the path to recession.

The Atlanta Fed’s GDPNow’s latest forecast of fourth quarter GDP is at 2.5 percent. The number has been steadily dropping from around 3 percent since the start of November as both investor and consumer confidence is waning. The decline is due to a number of other factors, including, a one percentage point decline in nonresidential equipment investment growth and drop in existing home sales reported by the National Association of Realtors. 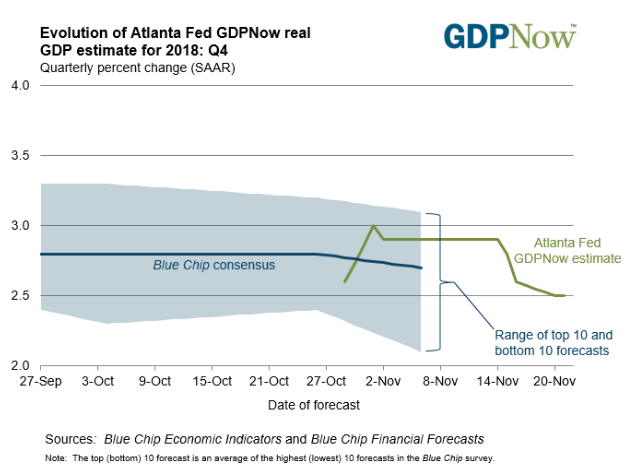 IF DEMOGRAPHY IS DESTINY, WE’RE DOOMED

America is not having children anymore. Because of this, the number of Americans 65 and older will outnumber the 18 and under population by 2030 for the first time in our nation’s history, according to the Census Bureau. By then, all Baby Boomers will be older than 65 and one in every 5 Americans will be at retirement age. 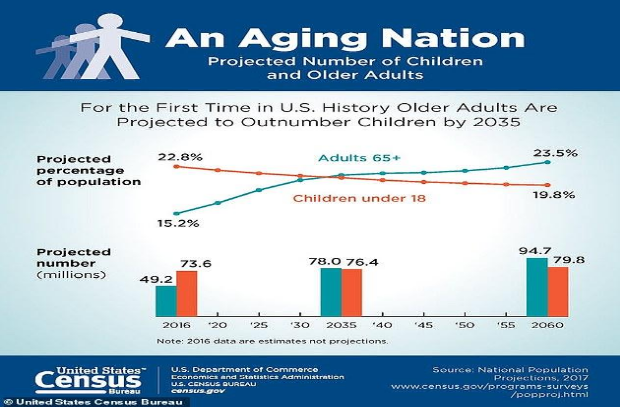 Guess we need more immigration, then? Nope! We actually need to close the border.