“Those who see no Lehman-like episode on the horizon did not see the last one.” – highly regarded writer, George Will, in a National Review article titled, “America Is Overdue For Another Economic Disaster.”

Lost in the largely meaningless political Kabuki theatre being staged on Capitol Hill is the fact that the economy is deteriorating. Real average weekly earnings in July declined for production and non-supervisory workers. It was down 0.01% from June to July and down 0.22% from July 2017. For all employees, real average hourly earnings declined 0.20% from June to July but was flat year over year.

The U.S. economy’s appearance of wealth creation and economic growth has been fully dependent on debt creation since 2009. As the graphic from John Williams’ Shadowstats.com shows, the rate of growth in real consumer credit outstanding is approaching zero (no growth): 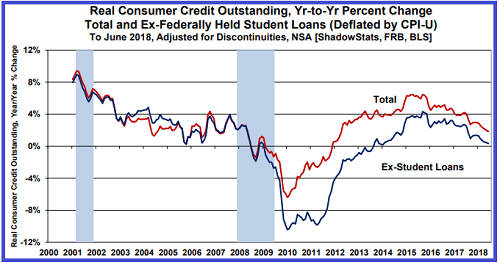 The chart above shows the year-over-year growth rate of real consumer credit outstanding with and without student loans. As you can see, ex-student loans (blue line), the rate of growth in outstanding consumer debt (not including mortgage debt) is close to zero. The increase in consumer credit reported for June (the latest month for which data is available) was $10.2 billion vs. $16 billion expected. It was down from May’s increase of $24.6 billion. The perceived growth in GDP is inextricably tied to the growth rate in the use of debt. The near-zero growth rate in consumer credit is thus consistent with the view that the U.S. economy is weaker than the promotional propaganda flowing from Wall Street and DC.

“Student Loans Are Starting To Bite The Economy” – That was the title of a Bloomberg article last week. With $1.4 trillion outstanding, student loans are the second largest category of household debt after mortgages. 22.4% of all households carry student debt. 44.8% of households in the 18-34 age demographic carry student debt – that’s up from 18.6% in 2001.

Not discussed in the article is the estimate that 40% of borrowers will default on their loans by 2023. The current 90-day “official” delinquency rate is 11.2%. But this number is highly deceptive because 30% of all student loans are in deferment or forbearance. These loans are put into “remission” for many reasons but the most common is that it enables the borrower who can’t make payments to defer the stopwatch on delinquency/default.

While it’s possible that the student loan problem is affecting potential demand from potential homebuyers, most people who have student debt also have credit card and auto debt. So it’s not clear that student loan debt alone has affected the ability of first-time buyers (18-34 age cohort) to buy a home.

Rather, I would argue that it’s the accumulation of debt since 2012 that is affecting all areas of the economy:

As you can see in the chart above, total household debt through the end of March 2018 – which means the debt level is even higher now – is considerably higher than the previous peak at the end of Q3 2008. Not shown is a graph I constructed on the FRED site that added nominal GDP. The rate of growth in household debt has sharply surpassed the rate of growth in GDP since Q3 2015.

This is why the economy is stalling. This is why the housing and auto markets are now in definitive contraction. It has nothing to do with the trade war or low housing inventory. It has everything to do with an economic system that is losing its ability to support the massive amount of debt that has been issued since the last financial crisis (de facto collapse).

The weekly economic reports – both Government and private sector – continue to reflect a downturn in economic activity. Moreover, the reports almost always are below the hyped-up expectations of Wall Street’s brain trust. The chart below reflects the irrational optimism of anyone chasing stocks higher (primarily hedge fund algos): 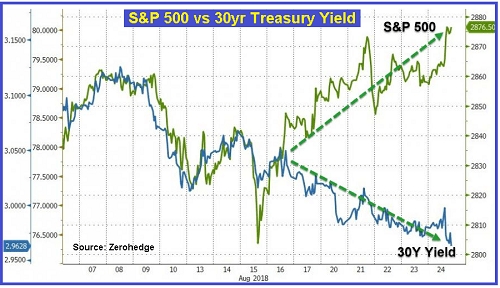 As you can see, since the middle of August, the 30-yr Treasury yield has negatively diverged from the S&P 500 after being tightly correlated for the first two weeks of August. The spread between the 2-yr and 10-yr treasury is at its lowest since August 2007.

The Treasury curve “flattens” when the short end of the curve rises relative to the long end. The curve flattens when the market has decided that the Fed is wrong on its policy of raising the Fed Funds rates because the economy is slowing down. Large Treasury buyers pile into 10-yr and 30-yr Treasuries on the expectation that a deteriorating economy will force the Fed to reverse course and lower rates again. The chart above reflects the market reacting to the steady flow of negative economic reports.

If the Fed is right, we should see the 30-yr yield “catch up” to the SPX. Conversely, if the market is right, the chart above is yet another warning sign of an eventual stock market “accident.” I have no doubt that the Fed is wrong. That said, the Fed has painted itself into a corner on rates. Contrary to the Fed’s public propaganda of “low inflation,” the Fed is well aware of the true rate of inflation – inflation created by the Fed’s monetary policy since 2008. If the Fed does not act to tighten monetary conditions, price inflation will continue to accelerate and inflict serious damage to the U.S. economy.