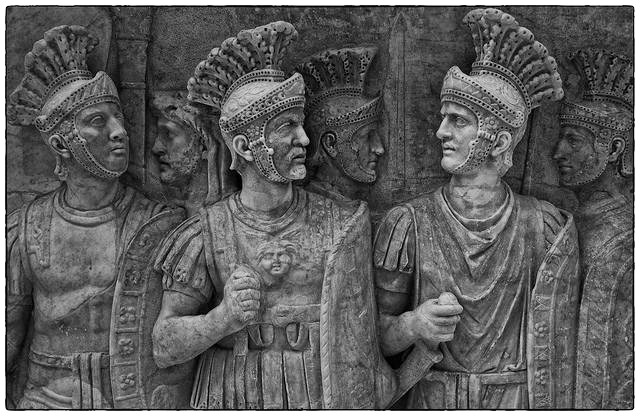 After Caesar Augustus gained complete control in 27 B.C. and became the first Roman Emperor, he established the Praetorian Guard for his personal protection.  Over the next three centuries, the Guard exploited its nexus to the seat of power for its own interest and aggrandizement.  Most notably, the Praetorians schemed and interfered with Roman politics to the point of overthrowing emperors and proclaiming their successors.

In 193 A.D., Emperor Septimius Severus tried to disband the Praetorian Guard, but his reorganization of the Guard did not last as it regained power after his death.  In 306 A.D., amidst turmoil among a tetrarchy of Roman emperors, the Praetorians turned to Maxentius and proclaimed him their emperor.  In 312 A.D., Constantine the Great defeated Maxentius at the Battle of the Milvian Bridge to gain control of the Western Roman Empire.  After the death of Maxentius at the battle, Constantine put an end to the Praetorian Guard by destroying their barracks and dispatching their soldiers to the outskirts of the Roman Empire.

Flash forward to the early 21st century in the U.S. and we see a replay of this sordid Roman history repeating itself with the modern-day Praetorian Guard that holds sway within the Federal Bureau of Investigation and the U.S. Department of Justice.  Prior to the 2016 presidential election, FBI and DOJ leaders sought to influence the election by favoring one presidential candidate (Hillary Clinton) and undermining her opponent (Donald Trump).  They were so sure Clinton would be elected that they clumsily perverted justice to ensure that outcome.

This is exactly what the Roman Praetorians did two millennia ago when they hand-picked the emperors they favored time and time again.  They expected to be rewarded by the grateful emperor, who would invariably shower them with gifts and power.  For centuries, this rigged system of government worked extremely well for the Roman Praetorians until they overplayed their hand.  Ultimately, they picked the wrong emperor, which led to their ignominious demise.  As it was then, so it is now.

It is one thing to curry favor with a president who is duly elected by the people.  It is quite another thing to influence an election in order to curry favor with a sitting president and his heir apparent.  That’s exactly what occurred when the FBI and the DOJ did backflips to exonerate Clinton so she could campaign for the presidency unfettered by a criminal probe into her mishandling of classified information and the destruction of subpoenaed emails.

Not only were the American Praetorians careless in their execution and cover-up of the rigged Clinton investigation, they simultaneously sought to damage her adversary, Donald Trump, by launching a probe into possible Trump-Russia collusion based on a licentious phony dossier that was bought and paid for by the Democratic National Committee and Clinton.  It was a classic push-pull maneuver.  Push Clinton toward her expected coronation as president and pull her opponent down at the same time.  FBI and DOJ leaders had morphed from law enforcers into kingmakers or, in this case, queen makers.

At the time, it seemed like the Praetorians had dealt themselves a winning hand since Clinton was way ahead in the polls.  Unfortunately for them, pesky American voters didn’t get the memo.  Trump won; Clinton lost.

Most intelligent individuals, especially the Praetorian insiders, should have seen the writing on the wall at that point.  Instead of retreating and calling off the dogs, they doubled down and pressed their attack on the new president.  Such was their deep-seated animus toward Donald Trump.  They were irate that their favored candidate didn’t win and were determined to unseat the victor, who had the temerity to win a national election.  In their twisted minds, they knew better than the American people.

The hubris of these unelected bureaucrats was so great that it never occurred to them that they had sworn to uphold the law of the land.  Instead, they acted like half-assed politicians who are accountable to no one, including congress and the president.  As they see it, their primary duty is to protect the institutions of the FBI and the DOJ above all else, which means protecting themselves first and foremost.  After all, who is going to investigate the FBI, the premier law enforcement agency on the planet?  Nobody, that’s who.  They would simply close ranks and clam up.  They decided to take down Donald Trump by getting him impeached or, barring that result, they would hobble his presidency with a never-ending Trump-Russia collusion probe.

They sought and received repeated approvals from the U.S. Foreign Intelligence Surveillance Court to monitor Trump’s associates based largely on a false dossier funded by Trump’s political adversaries.  Like the Roman Praetorians before them, the upper echelon the FBI and the DOJ were hell-bent on getting their way.  American voters be damned.  Justice be damned.

Their strong bias for one candidate over another has come to light despite the yeoman efforts of FBI and DOJ management to stonewall record requests from congress and Freedom of Information Act requests from citizen advocacy groups such as Judicial Watch.  The FBI and DOJ constantly hide behind self-serving excuses to refuse the release of documents and, when forced to do so, they release heavily redacted files.  They offer up the usual pretexts to fend off public disclosure such as:  the information you seek cannot be disclosed because it involves an ongoing investigation, or the information you seek involves national security, or our methods and sources will be jeopardized if the information you seek is divulged to the public.  But it seems the ones who would be most harmed by public disclosure are the corrupt FBI and DOJ officials themselves, who are trying desperately to keep from embarrassing themselves, or revealing how they played politics by weaponizing our justice system.

See also  Peter Schiff: This crash is just beginning. Bitcoin will not recover.

Nonetheless, the truth has a way of surfacing through the cracks.  Narrow cracks turn into deep fissures and fissures turn into a chasms.  Although it may take longer than we like, the truth ultimately wins out.  We can see it unfolding at the FBI and the DOJ as the corrupt officials are fired, resign, or are re-assigned.  The tide has receded and the naked bodies at the FBI and the DOJ can be seen floundering on the beach.  Soon they will turn on each other in much the same way they try to flip witnesses against each other.  It’s the beginning of the end.

The Praetorians at the FBI and the DOJ, who fixed the Clinton investigation and sought to frame a sitting president, have no place in our justice system, except inside its correctional facilities where they belong.