The Fed just expanded its balance sheet by $250 BILLION in eight weeks.

Yes, a quarter of a TRILLION dollars… in two months.

The last time the Fed was expanding its balance sheet at this pace was when Lehman Brothers failed in September 2008.

The only difference is that back then the financial system was in the depths of the worst crisis in 80 years… unemployment was over 6% and rising every months… and the U.S. was in the middle of a deep recession.

This time around, stocks are at new all time highs… unemployment is 3.6%… and the U.S. economy is growing at 2%.

READ  Looks like Big Tech is going to have some Big Problems real soon.

And the Fed’s putting $250 BILLION in liquidity into the system in just eight weeks.

We can disagree with this. We might even think it’s outright offensive. But it’s a fact. And it means stocks are going to explode to levels you won’t believe.

Liquidity is what drives stocks. Not the economy. Not earnings. Liquidity.

This is especially true in the post-2008 era which has been defined by central bank intervention more than any other time in history.

So what does this mean for stocks?

Again, it means stocks are going to go parabolic to levels you won’t believe.

The S&P 500 just broke out of an expanding pattern (purple lines) within its bullish channel (blue lines). The door is now open to 4,000. 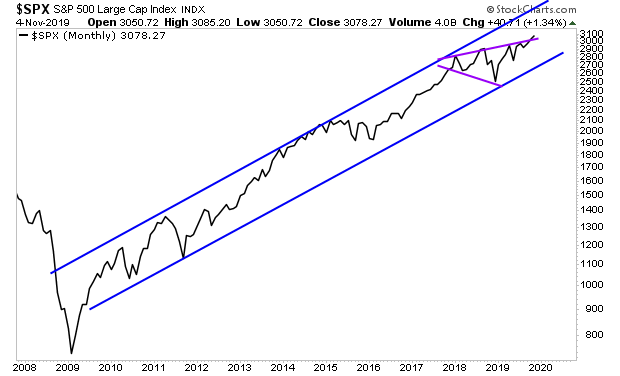 We’re putting together an Executive Summary on how to play this move.

It will identify which investments will perform best during the Fed’s next bubble, including a unique play that could more than double the performance of the S&P 500.

This Executive Summary will be available exclusively to subscribers of our Gains Pains & Capital e-letter. To insure you receive a copy when it’s sent out, you can join here: