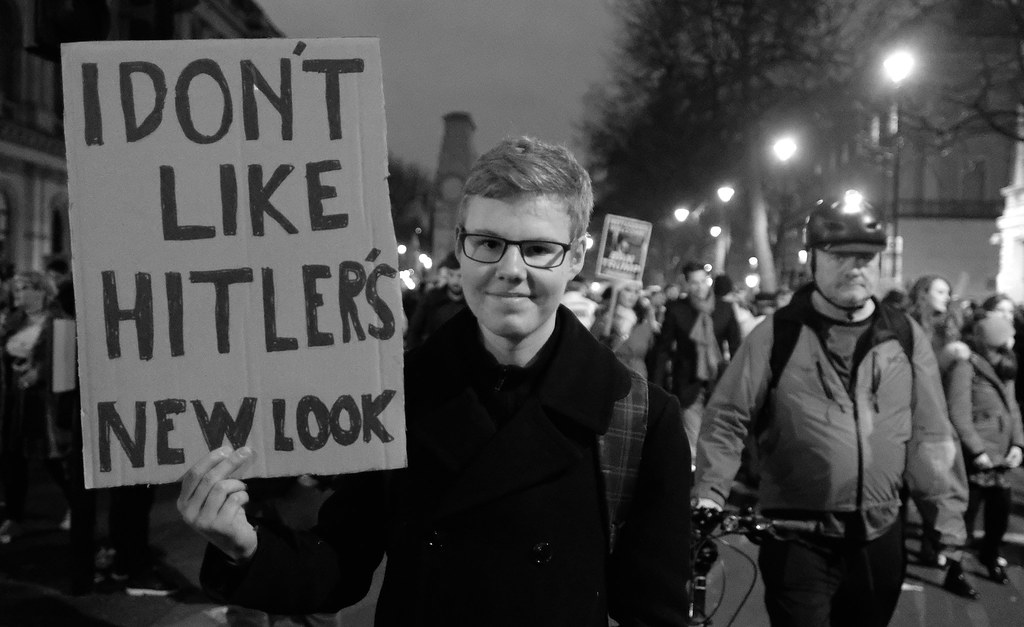 In protests across the world, on vast swathes of social media, and on the trembling lips of each special snowflake…”but, but, but…Trump is literally Hitler!” cry the sorrowful thinkers of today. A quick Google search will give you 30,000+ results for this phrase, and without the “literally” (although still implied), you’ll get more than a hundred thousand. Some of the more prominent blogs will doubtless give every reader a few hours of naughty Schadenfreude as you read about the illogical Gordian Knots these SJWs have tied themselves into.
To state that “Trump is literally Hitler” (TILH), betrays not only an inability to think clearly, but also an incredibly weak grasp of reality. Point one of course being that only one person could actually “literally” be Hitler, and that is Hitler (you see the clue is in the word “literally”).
Now they could have phrased it slightly differently, for example: “Trump is literally similar to, but not quite the same as Hitler in some unspecified but deeply important respects”, which I’m sure is not quite as pithy (and of course much more difficult to type), but would not be quite so misguidedly wrong. And herein lies the problem, using a simile argument leaves others open to the same charges: Stalin, Mao, Lenin, Obama etc… because when you start getting into loose similarities, it becomes open season.
Another aspect is their sense of perspective. If you give the Snowflake a gun with one bullet (assume they don’t drop it or rust it with tears), and put them in front of Hitler and Trump Who do they choose to finish off? Surely one of them is responsible for the deaths of more than 6 million people, and the other is guilty of not being Hillary Clinton.

The most serious part of all this, is the wider effects. By creating an arena of fear-hyping and allusion, these people are making the world a more dangerous place. They are (accidently?) legitimizing the use of violence. If Trump is Hitler, then his followers must surely be the Nazis or the SS. And of course, it must be right to hurt or even kill Nazis, right? This is not just a possible future, it’s happening now.
Check out this video:

After beating a Trump supporter unconscious, they screamed “That’s right, Nazi Boy”. They seemed to feel happy at what they had done, justified even. In what world is it socially acceptable to beat someone unconscious for their political opinions? This one, apparently.
* In the interest of fairness, search results for “Obama is literally Hitler” had 5,000 results. But nobody in the media really agreed with it.

8 thoughts on “The Greatest Threat to the Human Gene Pool: Those that Write “Trump is Literally Hitler””