During a global pandemic with a highly contagious airborne disease, who wants to go shoulder-to-shoulder on an airplane with hundreds of other travelers? It’s no surprise that travel numbers fell off a cliff in 2020, but here’s how the stock market reacted to the turmoil inside the U.S. airline industry. 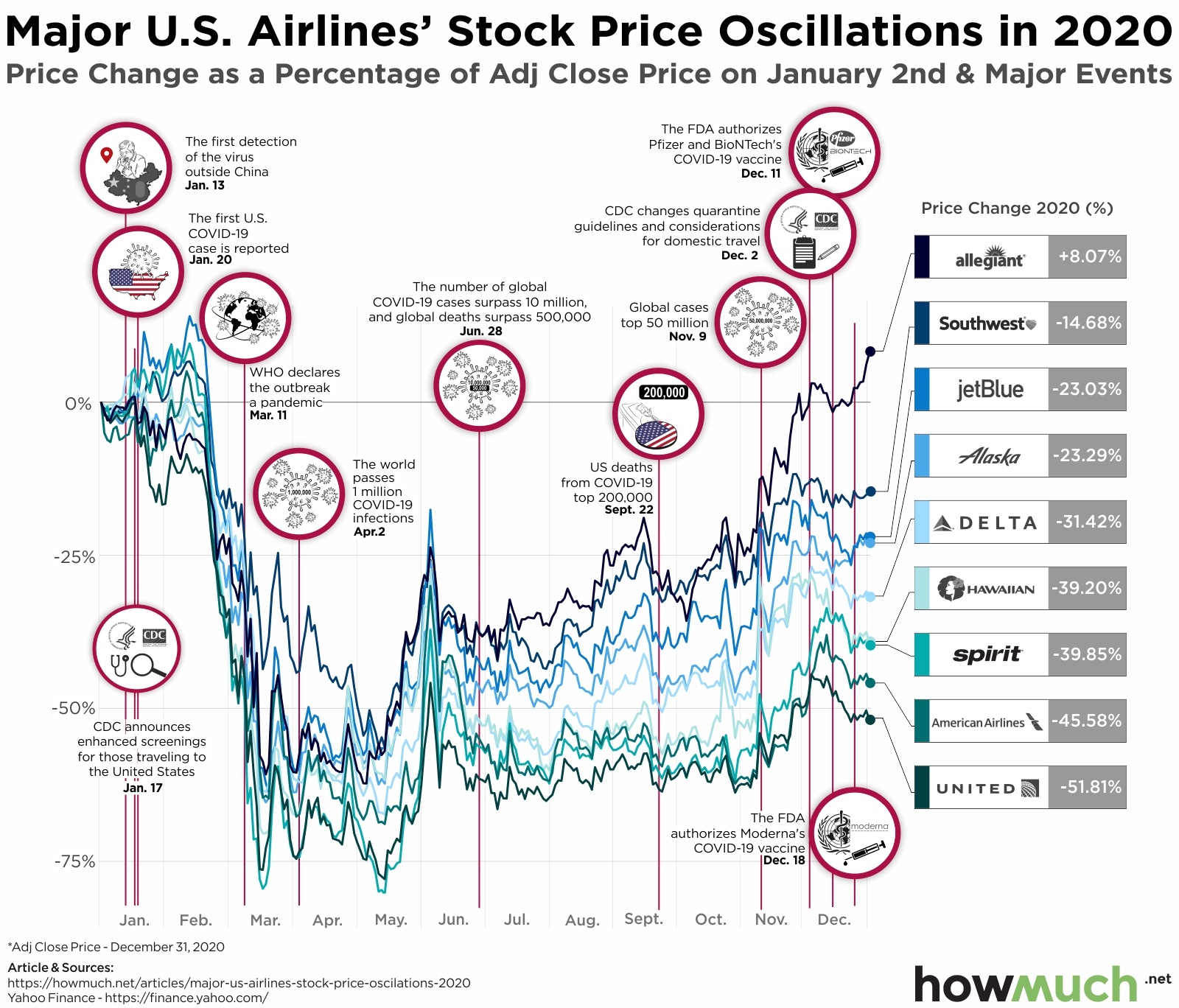 To create our visualization, first we grabbed the daily percentage change in stock price for 9 major publicly traded U.S. airlines according to Yahoo Finance. Not every major airline in the U.S. is publicly traded, like Frontier, however our visualuation still represents the vast majority of the airline industry. Then, we overlaid a series of events throughout 2020 to illustrate the rollercoaster share prices have gone on, and how far some companies have yet to go.

2020 started off as an overall positive year for the stock market and the broader American economy. U.S. stocks were setting record highs in February and the unemployment rate was only 3.5%. In reality, COVID-19 was spreading around the world, with the first case being reported in the U.S. on January 20. Researchers now believe the virus may have been in America and Europe as early as November or December 2019. But once people finally started to understand what was happening, the U.S. came to a standstill as millions of people sheltered in place. The WHO declared a pandemic on March 11 and by April 2 more than a million people were confirmed infected. Airline stocks absolutely cratered during this time period, collapsing in some cases over 75%. Every single U.S. airline stock was off its 2020 opening price by 50% or more.

From their lowest point in spring 2020, airline stocks have had a slow and gradual climb back. U.S. deaths from the virus topped 200,000 on September 22, a point at which no airline stock was within -25% of its pre-crisis valuation. The federal government also stepped in again with direct aid for the transportation industry, including billions earmarked specifically for airlines. And yet the promise of more federal aid wasn’t enough to save tens of thousands of jobs. By the time vaccines were authorized in December, Allegiant was the only airline to see its price completely recover and in fact end the year in positive territory.

Even with the distribution of effective vaccines, the world still continues to suffer from the coronavirus. Donate now to the WHO COVID-19 Response Fund to make an immediate impact today.