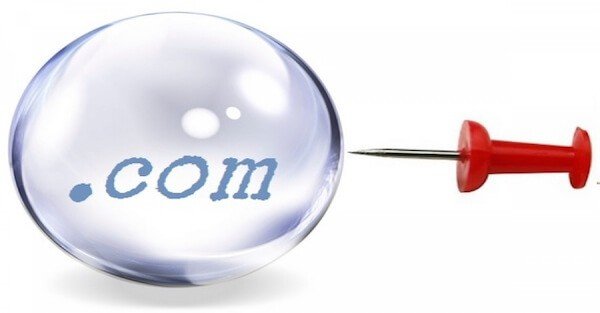 A few days ago Charles Schwab, the investment brokerage firm, announced that the number of new brokerage accounts soared 44% during the first quarter of 2017.
More specifically, Schwab stated that individual investors are opening up stock trading accounts at the fastest pace the company has seen in 17 years.
17 years.
Anyone remember what happened 17 years ago?
Oh right. The Dot-com bubble burst.
After years of unbelievable gains in the 1990s, the NASDAQ Composite index peaked at 5,132.52 on March 10, 2000.
Simultaneously, during the first quarter of 2000, investors were rushing to open new brokerage accounts invest their savings in the stock market.
The NASDAQ Composite subsequently fell nearly 80% over the next 2 ½ years, wiping out trillions of dollars of wealth from retail investors.
The last phase of any bubble is almost invariably the euphoric shopping spree of an irrational public that buys stocks, real estate, etc. at record highs, foolishly believing that prices will keep rising indefinitely.
That’s what happened in 2000.
And that’s what seems to be happening today.
Investors are once again clamoring to buy expensive, popular stocks at price levels never before seen in the history of the stock market.
Company valuations are sky-high.
At 26.44, the S&P 500’s Price/Earnings ratio is the highest EVER, except for two occasions: the 2008 crash, and the 2000 crash.
At 28.93, the “Shiller P/E ratio”, which looks at company valuations over a longer-term, 10-year period and adjusts for inflation, is at the highest level EVER, except for two occasions: the 2000 crash, and the 1929 crash.
Price to sales ratios are near the highest levels in at least 50 years.
Price to book ratios haven’t been at this level since the 2008 crash.
And the stock market cap to GDP ratio is the highest since the 2000 crash.
(If you don’t understand those terms, I would highly encourage you to read this book. This small investment in your education might be the best you’ll ever make.)
Billionaire investor Paul Tudor Jones described these expensive stock market valuations as “terrifying” earlier this month at a closed-door asset management conference hosted by Goldman Sachs.
Yet for some reason individual retail investors still believe that stock prices will continue to rise.
According to Yale University’s Stock Market Confidence Index, for example, over 90% of individual investors believe that the stock market will rise in the next 12 months.
This sentiment isn’t actually based on any data; it’s simply how people -feel-.
These are classic bubble conditions: record-high prices, unsustainable valuations, baseless euphoria, and a surge in activity from retail investors.
In fairness, it’s possible that corporate profits surge by unimaginable rates; this would bring stock valuations back to reality.
But that’s unlikely.
Corporate profits are more or less tethered to the overall economy. If GDP growth is flat, corporate profits will be flat.
Real GDP growth in the US basically went flat in 2016 at just 1.6%.
And the Federal Reserve Bank of Atlanta estimates that the US economy grew at a pitiful 0.5% annualized rate in the first quarter of 2017.
Consumer spending, the mainstay of the US economy, slumped in the first three months of this year.
Plus, interest rates are starting to rise, which increases borrowing costs for both businesses and individuals.
Given such anemic conditions it seems a risky to bet everything on a sudden shock-and-awe surge in corporate profits.
So we’re right back where we started– an overvalued market exhibiting classic signs of a bubble.
I’m not suggesting that some major crash is imminent.
It’s entirely possible that this bubble can get even bigger; the stock market might rise another 10%, 20%, or more.
But it’s also possible we’ll see a drop of 40%+ from these levels. Remember, the NASDAQ Composite fell 78% from its peak in 2000.
Rational individuals always consider their downside first. Fear of loss should be far greater than the fear of missing out.
Quite simply if the reward isn’t worth the risk, don’t do it. Find something else. Or do nothing and simply wait on the sidelines.
The universe of options is a lot bigger than simply “US stocks”, and there’s an abundance of great opportunity outside of the mainstream.
Lately I’ve been involved in a number of secured lending deals where I’m able to earn between 10% to 12% per year with almost zero risk.
This strikes me as a great alternative to the stock market; I’d rather make a fixed 10% with minimal risk than potentially make 15% or 20%, but risk a 50% loss.
I’ve also been buying cash-producing royalties, which in my view is one of the most undervalued asset classes in the world. (More on that another time…)
Bottom line, there’s no sense in taking on enormous risks to make a few bucks.
The world is a big place. And with so much technology and connectivity at our disposal, there are plenty of safe, lucrative alternatives out there to consider.

See also  They want you to forget this ever happened...
See also  The Panic of Hyperinflation vs The Stock Market Crash – Steve Penny
1,324 views

1 thought on “The Last Time This Happened The Market Crashed”