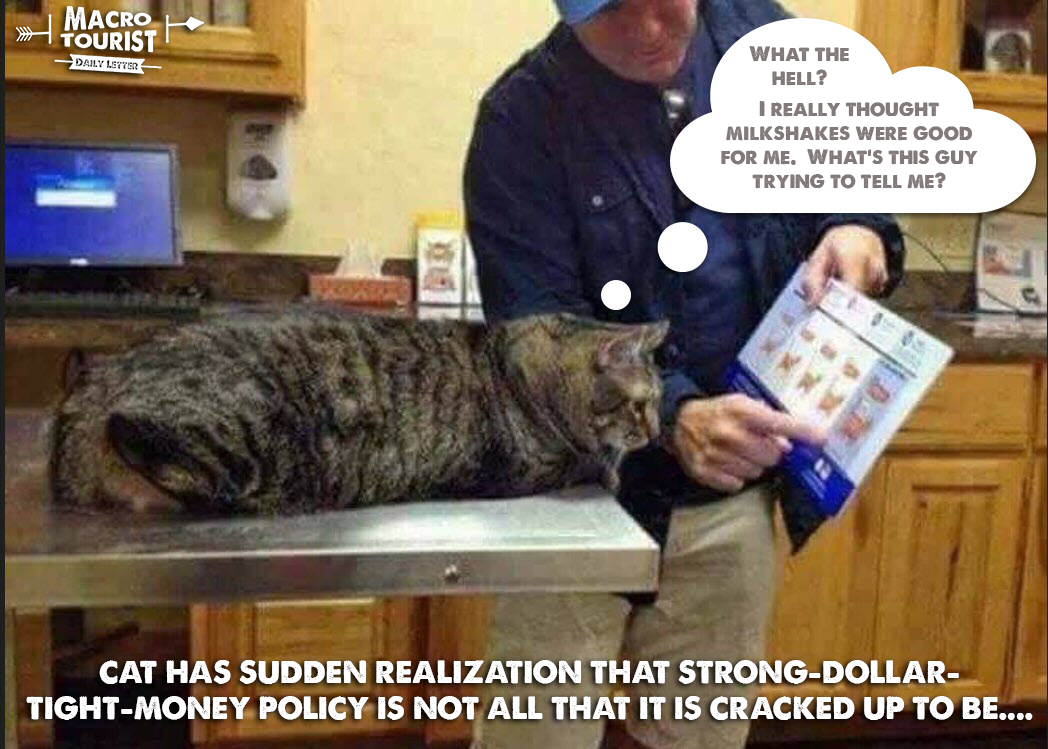 Think back to this past summer. The US dollar was rallying hard, having risen from 88 DXY in the spring to 97 as August drew to a close. At the same time, the American stock market was on fire, tacking on 400 S&P points in less than half a year. This was happening while the rest of the world’s stock markets were sucking wind. Europe was down a handful of percentage points, the MSCI world index ex-US was down a similar amount and emerging markets were being beaten like Marvin Nash at the hands of Mr. Blonde. In the period when the S&P had risen almost 10 percent, emerging markets were pushing down 15%. When you combine the meteoric US stock market rise along with the USD appreciation, the relative outperformance of US equities for overseas investors was stunning. 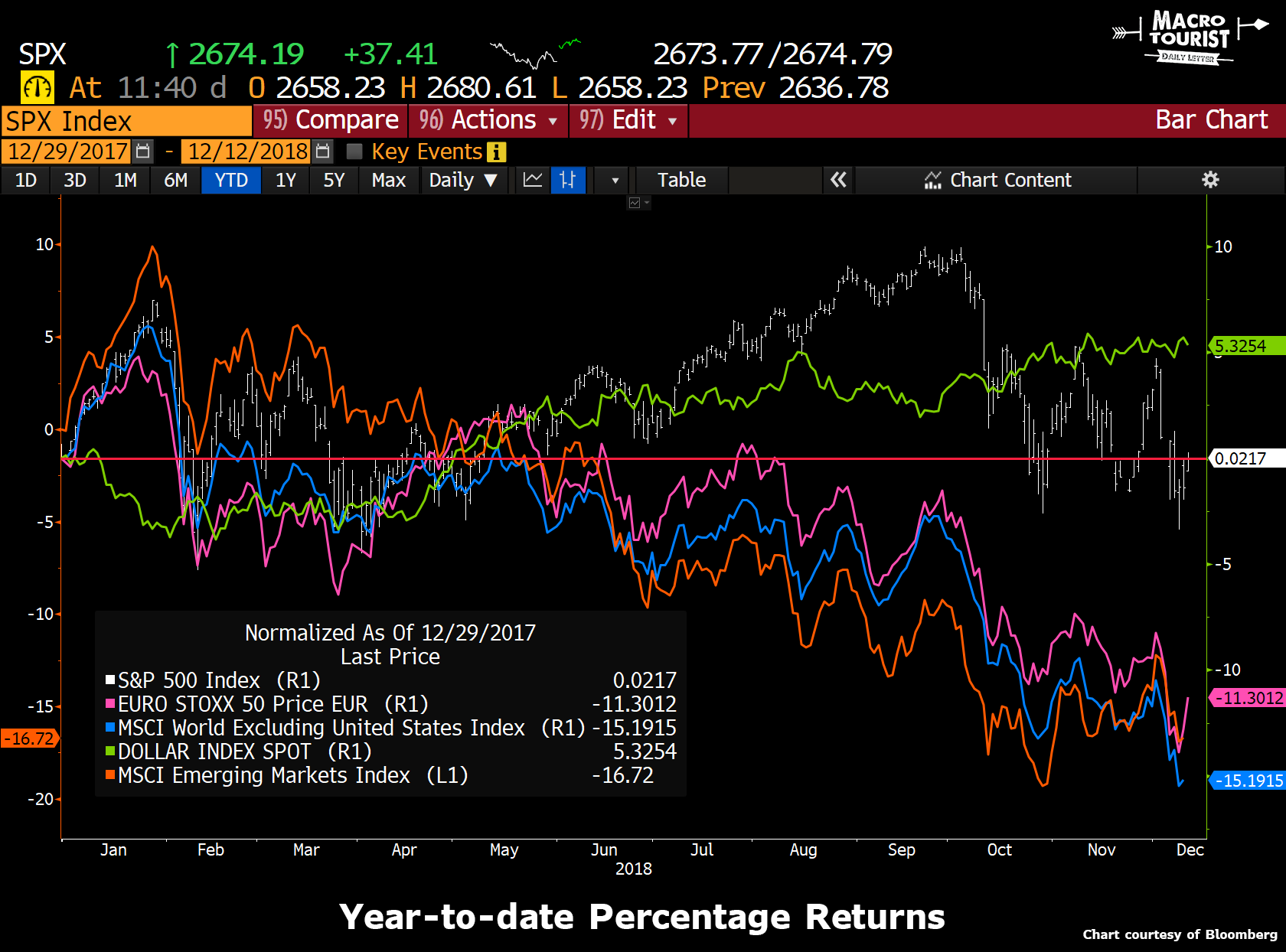 I understand all the reasons for the move. America was the only major country engaging in fiscal stimulus. They were also cutting taxes and engaging in pro-business deregulation. These policies allowed the U.S. Central Bank to pursue a tighter-than-would-otherwise-be-the-case monetary policy.

Wall Street always does this. They take a good idea, and they push it too far. The US-will-eat-the-world financial theory made a lot of sense… at first.

I am about to embark on a reason to sell US assets, but make no mistake – I am not disputing any of the reasons to own American assets, merely disputing whether those reasons are already in the price. Don’t send me a list of all the reasons why Europe is $%#%’d or why America is the undisputed global super power with a military and economic power unmatched by any rival. I get it.

I understand Santiago Capital’s Brent Johnson’s “Dollar Milkshake Theory” In fact, even though I didn’t agree with Brent’s call, earlier this year (when the whole world was bearish on the US dollar) I brought the loneliness of his prediction to everyone’s attention with a piece titled “US Dollar – Up then down?“

…there are others who believe the flow of funds from managers choosing the most attractive destination for their capital means more. My favourite US-dollar-bull-yet-still-gold-bug buddy Santiago Capital’s Brent Johnson created this great presentation outlining his arguments for why the US dollar is poised to rally.

As I was watching, I realized that Brent was one of the few pundits willing to say the US dollar was headed higher – not because of structural problems in the Eurodollar funding market or from a short squeeze in US borrowers paying back money – but because the US is the best economy out there. I might not agree with Brent, but I felt a certain kinship with his lonely call. Often the best trades are the ones where the fewest agree with you. I joked with Brent that it almost made me want to join him on the US dollar long side.

The investor is in me is convinced Luke and Mark are right that the US has entered into a long period of decline, but the fact that MacroVoices couldn’t find a single bull to make the US dollar bull argument makes the trader in me think that Brent is going to be right in the coming weeks and months.

Brent is one of the nicest guys out there, and let’s face it – he stood in there when no one (and I mean no one) was willing to be bullish on the US dollar. Kudos to him. You should all follow Brent, but just be careful when you google him. I am not sure, but there is someone that looks an awful lot like Ricky Gervais rapping and pretending to be Brent. 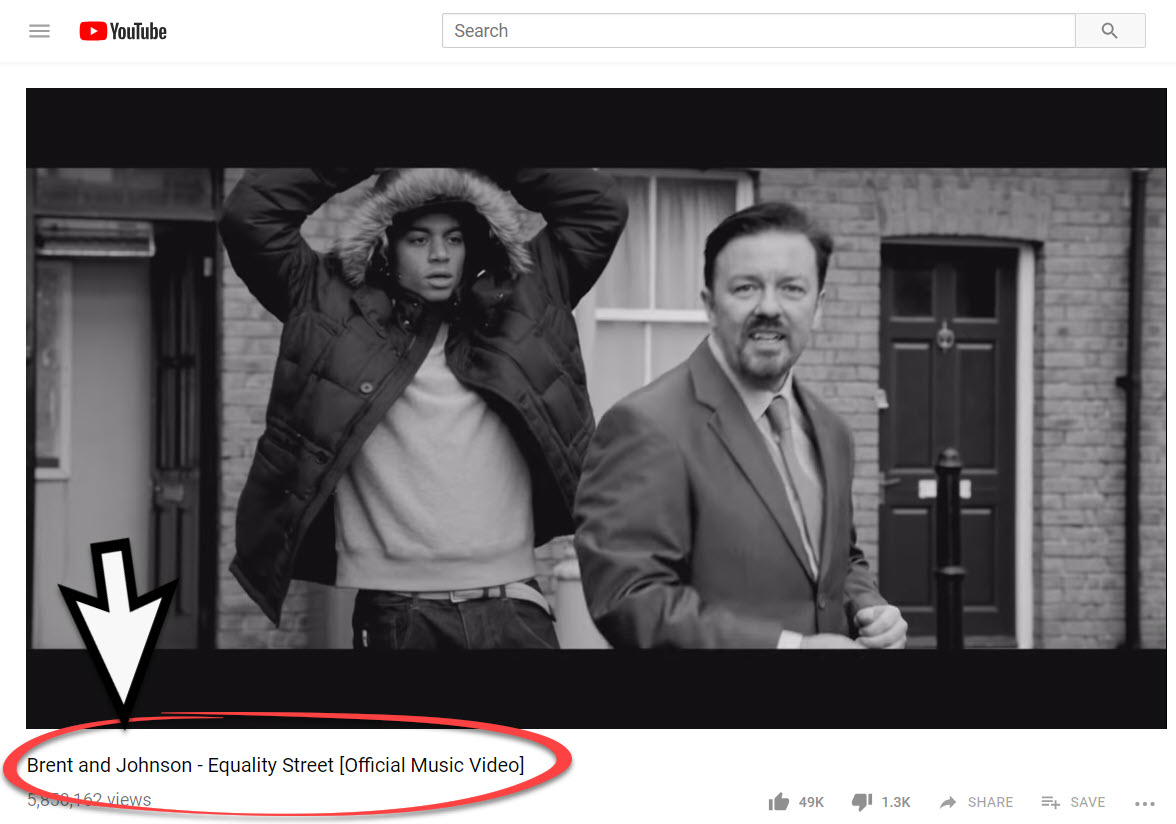 Actually, come to think about it, has anyone seen Brent and Ricky together in the same room? 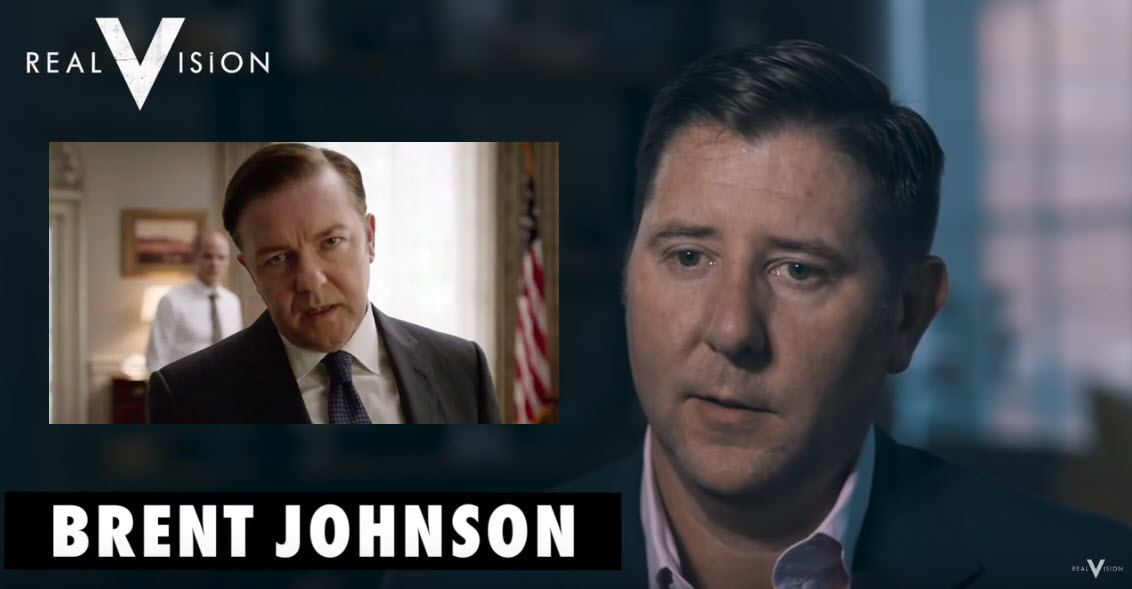 Regardless of what Brent does in his spare time (host the Emmys?), his “milk shake theory” has been spot on. America has drunk everyone else’s milkshake. Just like Brent said would happen.

But in digging up the earlier post, it reminded me how lopsided sentiment was back then.

That was then, this is now

Contrast that to the current environment.

If MacroVoices were to have another US dollar round table, I suspect they would have little trouble coming up with dollar bulls. Do you think it would be difficult to find a money manager who believes that US financial assets will outperform the rest of the world?

My guess is that they would be lined up around the block to tell you all the reasons why the rest of the world is a basket case, and that the US is the only safe place to park your money. 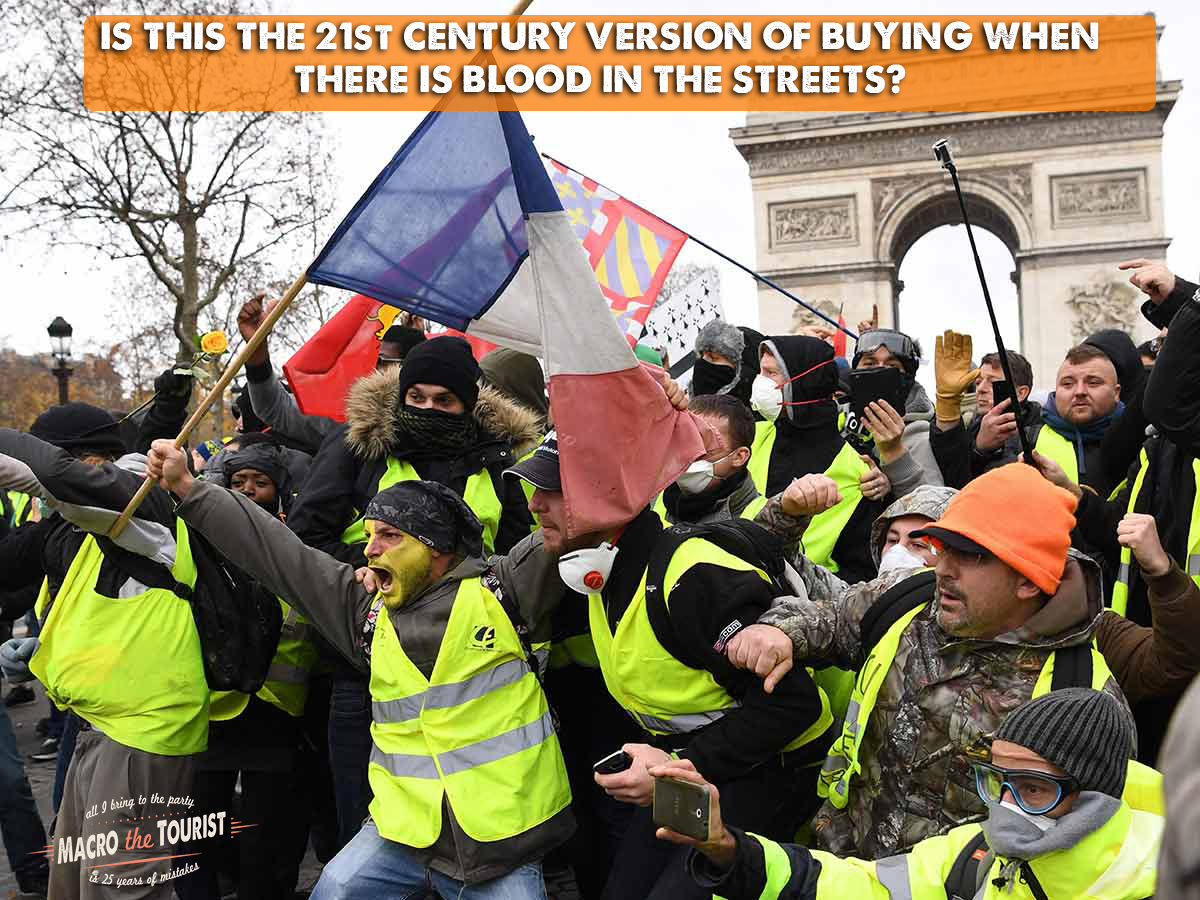 At the same time, America seems to be making all sorts of positive pro-business-capital-friendly moves. So, money flows into America. After all, who gets fired for buying IBM?

Yet buying American assets is the most over-owned crowded trade out there. Can I prove it with numbers? Nope, but all you have to do is look at the charts.

Do you know how difficult it is for a money manager to sit in front of the year-end-review committee and justify an overweight in European or emerging market equities? I would rather Mr. Blonde have a run at me. 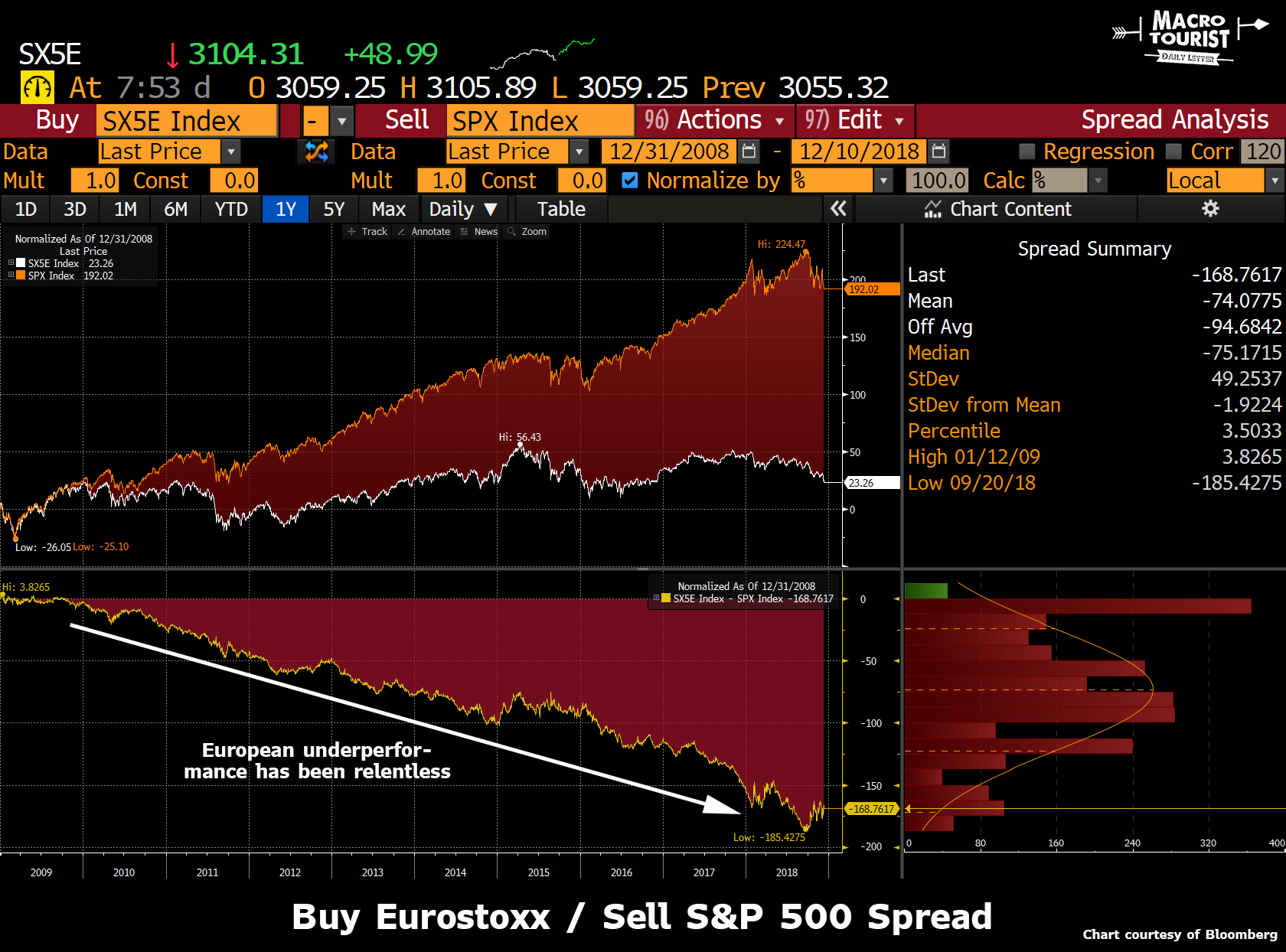 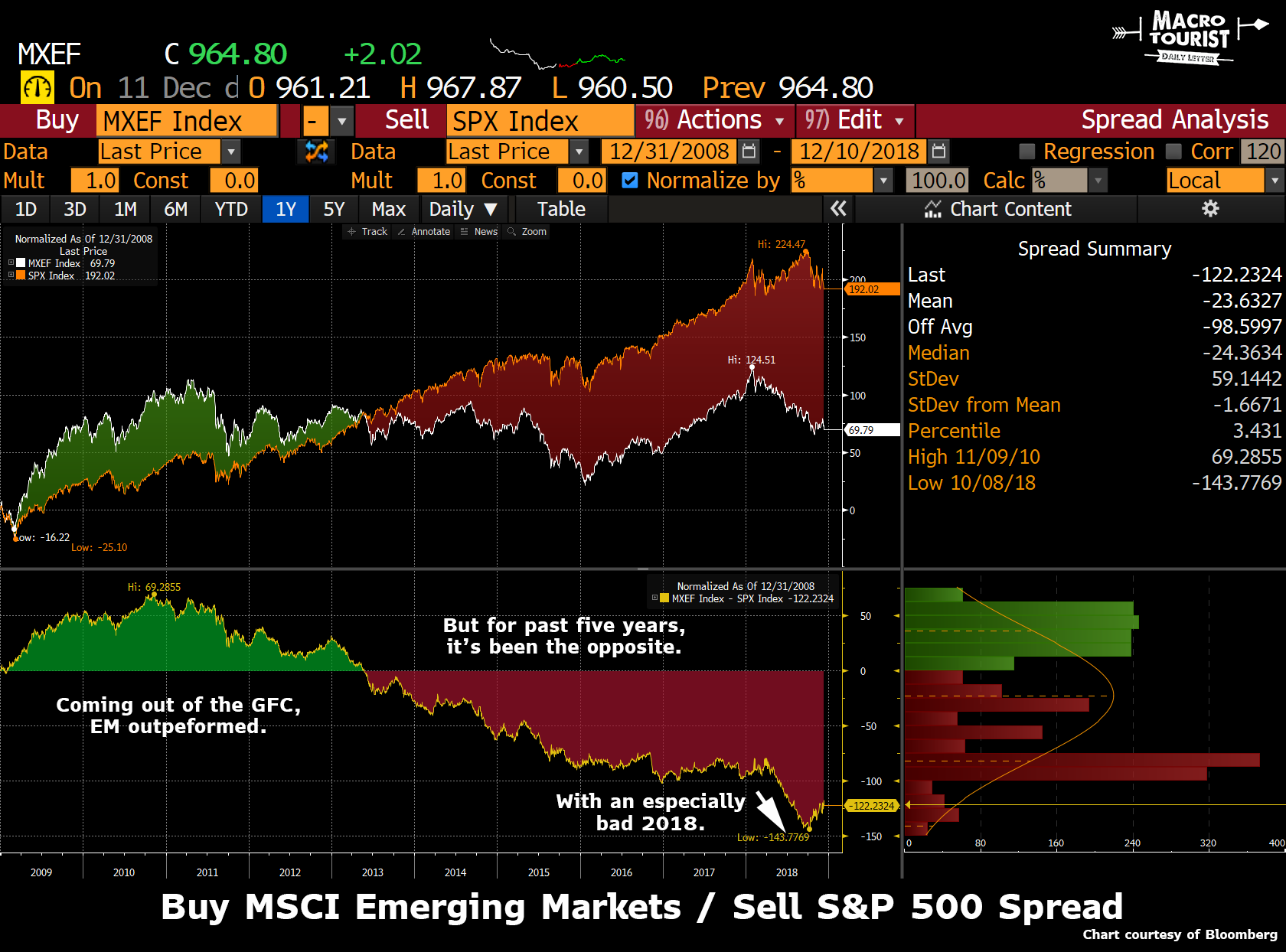 The simple fact is that apart from the most disciplined systematic manager (who is about to get fired), no one is underweight US assets.

Will this change going into year end? I suspect not. In fact, we could even see a little bit of “window dressing” with managers’ desire to show how they got the trade right in 2018 and were in fact overweight US assets. Therefore I suspect the US-relative-bid will stay firm and might in fact push higher into the final trading days of 2018.

Yet, during the next couple of weeks, I will be using any strength in US assets – both equities and US dollars – to sell into.

When I tell people I am bearish on US dollars, after they stop laughing, they often ask me – against what? When I tell them against everything, they proceed to lecture me on why those countries are awful places to invest. Yeah, they are probably correct. Europe is a disaster. Japan seems intent on printing their currency into oblivion. Britain can’t seem to do anything right these days. It’s difficult to put your foot down and say, “you should sell US dollar against XYZ currency.” But that’s precisely why everyone is stuffed full of US assets.

If I am correct, then we don’t need these other countries to be terrific investments. All we need is asset allocators to return closer to their benchmark weighting and the US dollar will decline. And in fact, if all this move ends up being is a return from overweight to benchmark, then the currencies that were hated the most – the ones that investors were most eager to sell in exchange for dollars – will be the ones that rise the most.

Have a look at both of those relative performance charts above. Do you want to know when they bottomed? Right around October 3rd. You know – the day Powell claimed the US was “still a long way from neutral” (see “Don’t Ingore the Yield Curve).

Powell’s over exuberant tightening was not quite as bad as ECB Chairman’s Jean-Claude Trichet’s disastrous tight money rampage of late 2008 and 2011, but it’s not nearly as benign as the “milkshake bulls” believe. 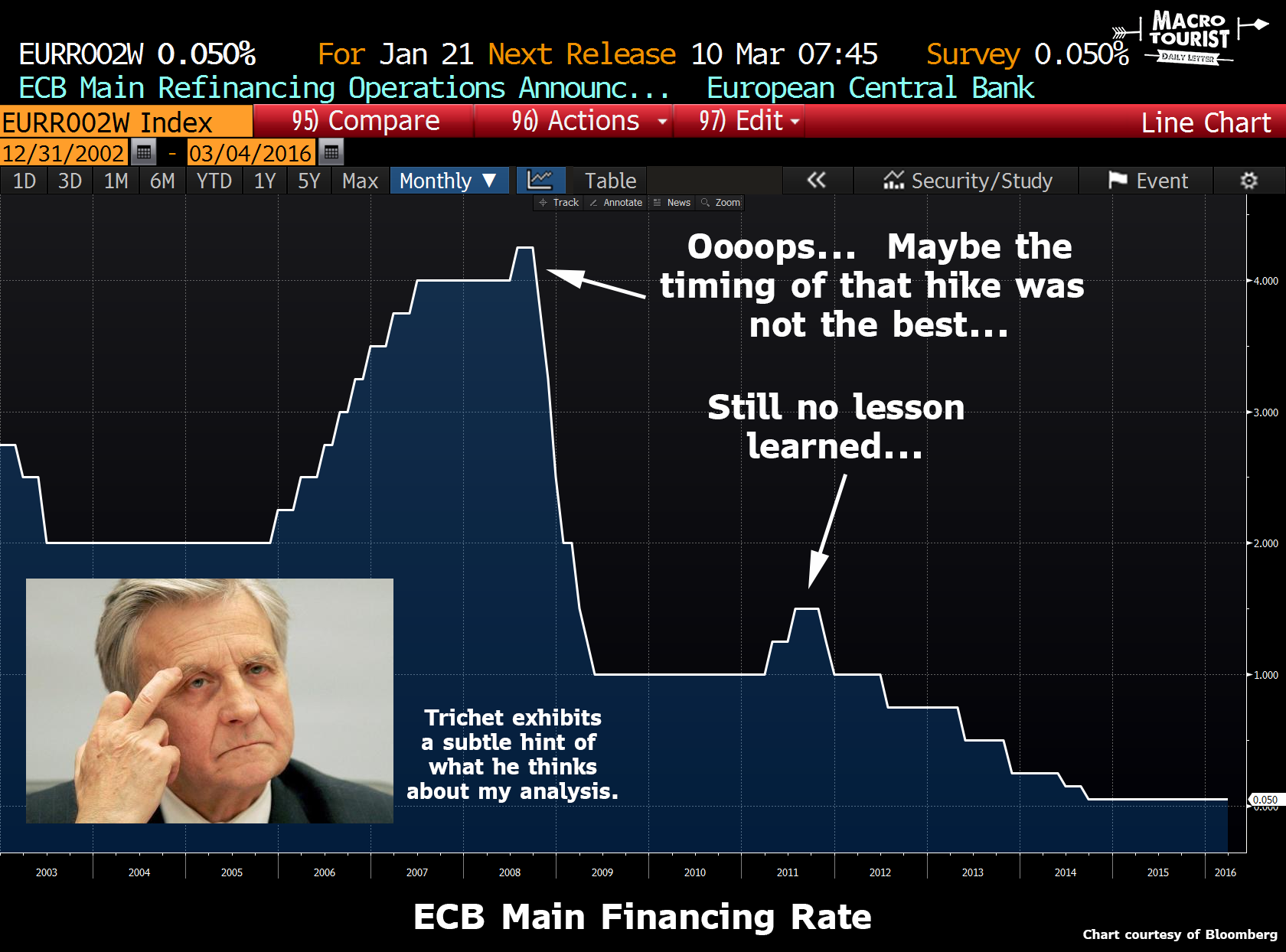 Something changed October 3rd with Powell’s “quite a ways from neutral” comment. The Federal Reserve finally tightened to a point where it was no longer reflexively positive. Raising rates at that point couldn’t attract anymore capital into the US stock market. It did not cause a positive feedback loop, but instead ushered in a little deflationary mini-wave. More milkshake merely caused the patron to throw up a little in their mouth.

This is my main point. Raising rates from this point will not cause a positive feedback loop, but rather only exacerbate the problems. Capital no longer rushes in to America chasing stocks because everyone is already long.

And the real problem is that these flows over the past year have caused the Federal Reserve to be tighter than would otherwise be the case. Don’t forget that the real reason Powell was so hawkish in that October 3rd speech was because markets were loosening financial conditions regardless of the Fed’s actions. 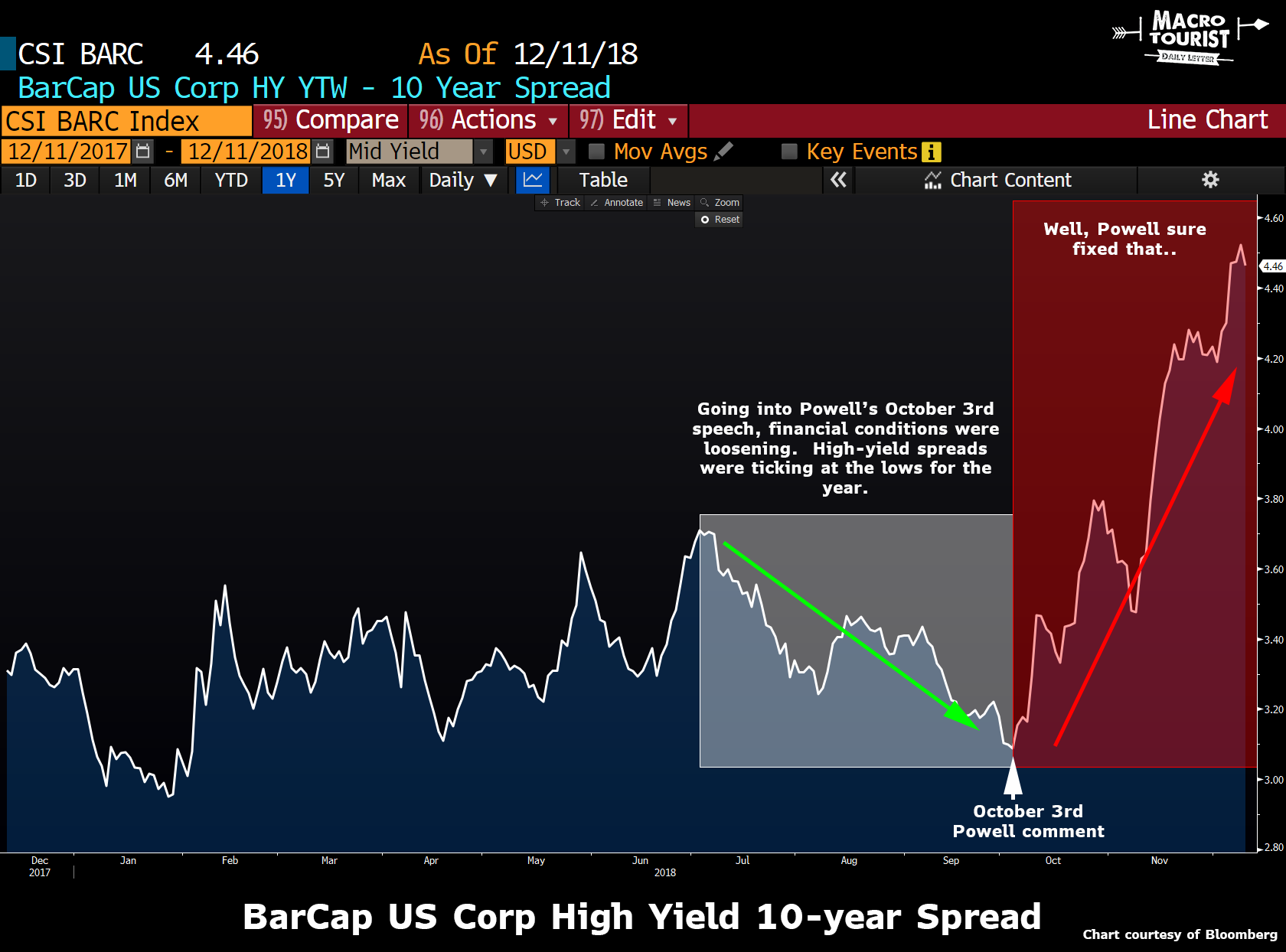 Powell was rightfully scared that the reflexive nature of the flow of funds into America would cause financial conditions to loosen to inappropriate levels.

Yet without all this money pouring into America desperately trying to have a sip of the “milkshake”, monetary policy would have been easier. Monetary policy was set for financial conditions, not eocnomic conditions. The United States was too successful and in the process have pushed themselves into at least an economic slowdown, and maybe even a recession.

I can already hear the cries of protest. Let’s start with my favourite – the “market has taken out almost all next year’s rate hikes and yet the US dollar is still up” argument. Yeah, that’s a good one. And it’s certainly true that the market has taken out a lot of 2019 hiking in the past month. 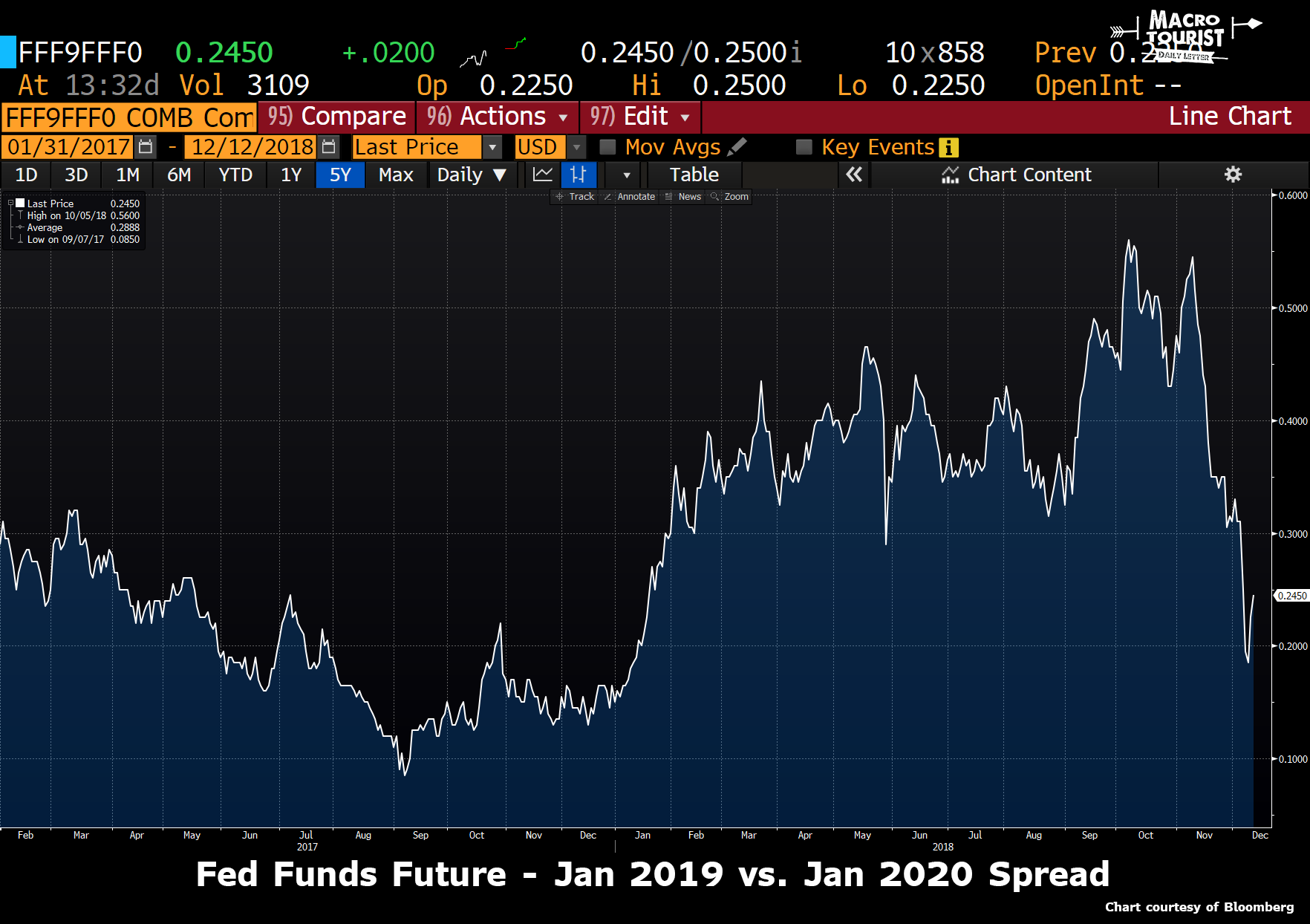 Although traders like us might sit around watching every tick, real money moves more slowly. A lot more slowly.

The fact that the market has taken out more than one hike in 2019 over the past month means that the real money has barely reacted. If you are running a large endowment or pension fund, then you aren’t banging out US assets with every tick in Fed Funds futures market. So I don’t buy this argument at all.

Next up is the “Powell is different than other Fed chairs and will not be swayed by each downtick in financial markets.” Really? He has already switched his tune in the space of less than one quarter due to stock market wobbles. I call bullshit on that one.

Well, what if the economy proves more resilient to the recent rate hikes? Then Powell might indeed raise rates and cause the US dollar to rally. This argument I will accept, but let me ask you something – what do you think that a stronger economy (with corresponding tighter monetary policy) does to both the yield curve and stocks? My guess is that the yield curve inverts, stocks sag, and sure, the US dollar rises, but it’s no longer a virtuous rise.

Here is my prediction; US stocks might rise, but only if the greenback falls. The US dollar might rally, but it will snuff out the stock market rally. The days of them both going up together are over. The milkshake glass is empty.