Like most of America, I was glued to the testimonies of Judge Brett Kavanaugh and Christine Blasey Ford yesterday.  I most likely differ from most, as I am still an American who wants to see our Judicial System survive and manage to keep societal laws intact. It is all we have to keep Communism at bay.

First of all, I want to say that some of my fellow Republicans have inspired me to stand strong and fight for justice.  Lindsey Graham spoke out for We The People in a big way. I cannot thank him enough.

LIVE: Supreme Court nominee Brett Kavanaugh and Dr. Christine Blasey Ford, who has accused Kavanaugh of sexual assault while they were teenagers, testify separately before the Senate Judiciary Committee.

QUOTE – “If you wanted an FBI investigation you coulda come to us,” Graham said, after Democrats on the committee have called for an FBI investigation into Ford’s claims. “What you want to do is destroy this guy’s life, hold this seat open, and hope you win in 2020. You’ve said that, not me.”

“You’ve got nothing to apologize for. When you see Sotomayor and Kagan tell them that Lindsey said hello,” Graham said, referring to Supreme Court Justices Sonia Sotomayor and Elena Kagan. “Because I voted for them. I would never do to them what you’ve done to this guy. This is the most unethical sham since I’ve been in politics. And if you really wanted to know the truth, you sure as hell wouldn’t have done what you’ve done to this guy.”

Graham then went on to ask Kavanaugh, point-blank, whether he is a “gang rapist,” after one woman came forward this week to claim Kavanaugh was “present” when she was “gang-raped.”

“I cannot imagine what you and your family have gone through,” Kavanaugh said, before addressing Democrats. “Boy y’all want power, God I hope you never get it. I hope the American people can see through this sham. That you knew about it and you held it. You had no intention of protecting Dr. Ford, none. She’s as much of a victim as you are,” he said, addressing Kavanaugh. “God, I hate to say it ’cause these have been my friends. But let me tell you — when it comes to this, you’re looking for a fair process? You came to the wrong town at the wrong time, my friend.” END OF QUOTE

After the hearing ended, the following occurred, and this incident should tell us what we are dealing with in the Democrats.  There is danger ahead for all Republicans, as we deal with the Democrats

UPDATE: Wikipedia has reverted the pages of the Republican Senators and the previous edits publishing their personal information appear to be removed from the public archive.

The two vandal IP's, belonging to the US House of Reps. have engaged in Doxxing + Vandalism previously. pic.twitter.com/hHn7Th0OkA

The home addresses of Republican Senators Lindsey Graham, Orrin Hatch and Mike Lee, all sitting on the Judiciary Committee, briefly appeared on Wikipedia. The edits were allegedly made from Capitol Hill.  This occurred while they attended the testimonies of Brett Kavanaugh and Christine Blasey Ford.

The edits, which were promptly removed by Wikipedia, contained the lawmakers’ apparent home and DC addresses, home and cell phone numbers and personal email addresses.

This is just an aspect I would like to point out that I noticed during the hearing. I advise all of you to watch the following video.

Alyssa Milano was caught filming parts of the hearing of Dr Christine Blasey Ford and Brett Kavanaugh, breaking the rules of the Senate Judiciary Committee. Milano had to be told by a security guard to stop filming.

Alyssa Milano sat directly behind Brett Kavanaugh the entire time, and she gave him what I call the ‘evil eye’ continually.  Of course, he could not see her face, but her intention was very clear to me. How did she get a seat inside that hearing….such a prominent seat…permission to use such an intimidation tactic?

Further, Christine Blasey Ford was asked if she paid for her own lie detector test.  She said, ‘no.’

Then she was asked if she knew who paid for it.  She said, ‘no.’

Who mentored Ford?  Who took her and told her what to do throughout this time?

QUOTE – In a quick scan of the Christine Blasey Ford testimony transcript (Washington Post), I found the following:

BROMWICH: I — I can help you with that. Both her co-counsel (ph) are doing this pro bono. We are not being paid and we have no expectation of being paid.

In other words, her legal fees and costs such as the polygraph session have been $0.

The transcript also answered some questions, such as “How did Christine Blasey Ford make it back and forth to Hawaii?“. She is afraid of flying, which is why there was a lot of delay about getting her to the Senate:

FORD: Yes. So that was certainly what I was hoping, was to avoid having to get on an airplane, but I eventually was able to get up the gumption with the help of some friends, and get on the plane.

See also  A documentary revealing the connection between Covid-19, Vaccines, Masks, The Banking System and The Great Reset...

But she flies coast-to-coast regularly:

MITCHELL: OK (ph). When you were here in the mid — mid-Atlantic area back in August, end of July, August, how did you get here?

FORD: Also by airplane. I come here once a year during the summer to visit my family.

FORD: I’m sorry, not here. I go to Delaware.

MITCHELL: OK. In fact, you fly fairly frequently for your hobbies and your — you’ve had to fly for your work. Is that true?

And sometimes on long-haul transpacific legs:

MITCHELL: … I also saw on your C.V. that you list the following interests of surf travel, and you, in parentheses” Hawaii, Costa Rica, South Pacific islands and French Polynesia.” Have you been all to those places?

MITCHELL: And your interests also include oceanography, Hawaiian and Tahitian culture. Did you travel by air as a part of those interests?

Mark Judge is the man caught between Christine Blasey Ford and Judge Brett Kavanaugh.  He was a close friend of Brett Kavanaugh’s, and Christine Blasey Ford claims allegedly he was present during the alleged  sexual assault. His name has been repeatedly used by the media, but Mark Judge is not well. The constant referral to Ford’s accusation against him has aggravated his illness.

He did send the following letter to the Judiciary.

New #Kavanaugh friend Mark Judge letter – obtained by FOX – on why he didn’t want to testify as a recovering alcoholic and cancer survivor, and says he never saw Judge Kavanaugh act in the manner Dr. Ford describes. pic.twitter.com/sLLqIDd7Fn 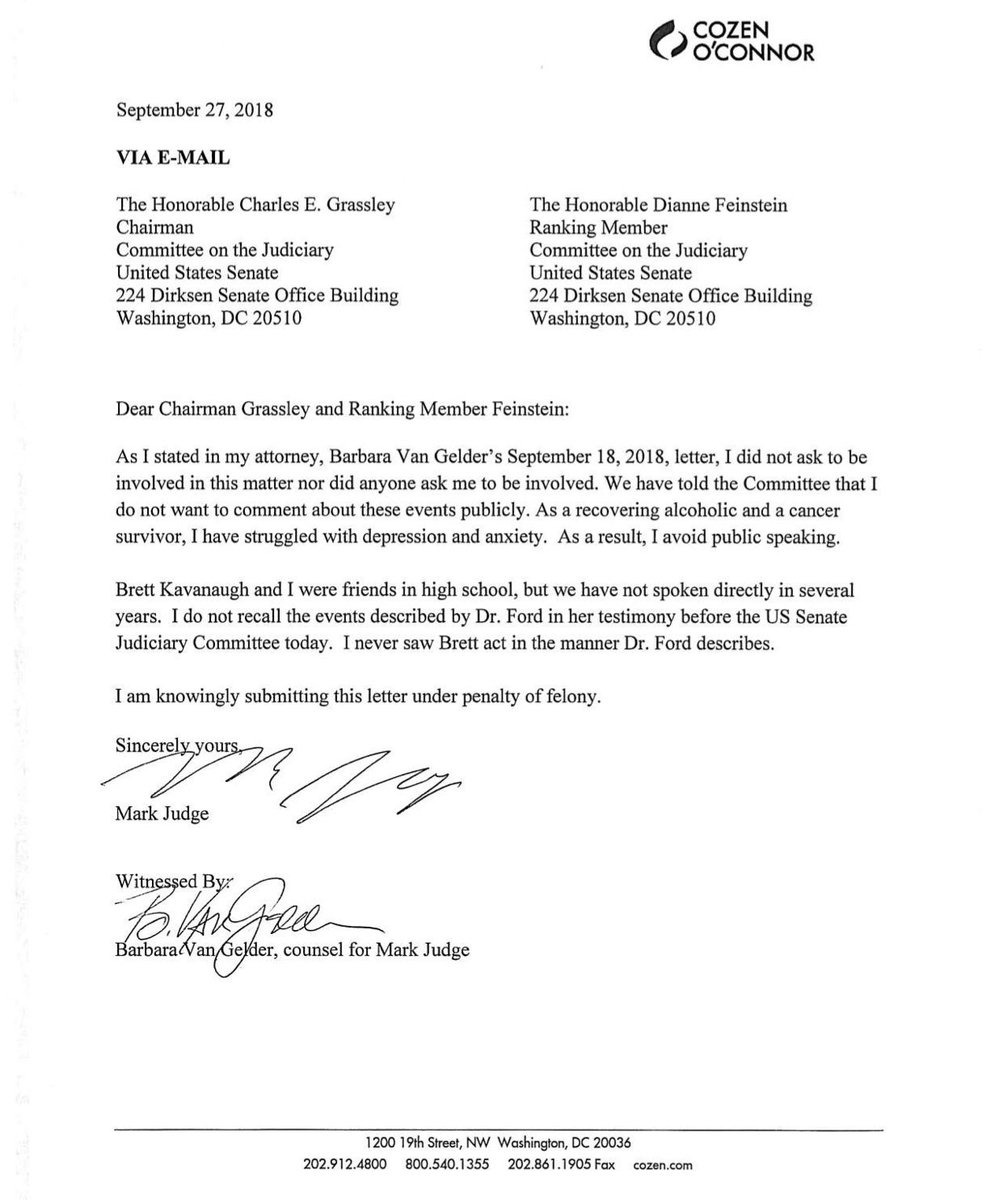 “As a recovering alcoholic and a cancer survivor, I have struggled with depression and anxiety,” his letter said. “As a result, I avoid public speaking.”

“I told him to leave town. He is being hounded. He is a recovering alcoholic and is under unbelievable stress,” Judge’s attorney said. “He needed for his own health to get out of this toxic environment and take care of himself.”

Judge also said in the letter that he and Kavanaugh were friends in high school but have not spoken directly in several years.

In conclusion, the entire hearing was sad and shocking to the senses.  I am sure Kavanaugh and his family will never truly recover from this trauma.

I think for Christine Blasey Ford, a whole new world is opening up for her. She will be appreciated and protected by the #METOO Movement.  More than that, she will be the new female speaker and representative for the Democrats.