by Daniel Carter
After World War II, the United States became the most powerful and most militarily active nation in the world. The real reason the US decides to go to war is not for the reasons we are sold through the mainstream media. It’s not about getting rid of evil dictators or for humanitarian reasons. It is not even about defeating terrorism. The real reason the US is always at war is purely to protect its economic hegemony.
Once the second world war ended, the developed world was so devastated that the US easily rose to become the world’s most powerful nation. To ensure that their power would last generations, the US created the Petrodollar System. This system was created when the Nixon administration made a deal with Saudi Arabia in the 1970’s. The US agreed to supply Saudi Arabia with weapons if they sold all their oil in US dollars. Once the Saudis collected dollars from oil sales, they would buy US Treasuries to earn an investment return.
The Petrodollar System grew into something much more than a deal between the US and Saudi Arabia. The vast majority of oil sold in the world is currently sold in US dollars. This massive demand for USDs and US Treasuries has allowed the US to rapidly expand its monetary base and debt levels. Even if it is a temporary illusion, the Petrodollar System has allowed the US to become the most powerful nation the earth has ever known. The US must now maintain control over the flow of natural resources (mainly oil and natural gas) to maintain its impressive empire.
So, it is easy to see why anyone challenging this system would be met with strong opposition. Today, the US’s militarism is almost entirely based on keeping the Petrodollar System alive. In 2000, Saddam started selling oil in Euros. In 2003, the US invaded his country. A few years later, Gaddafi made it clear that he would dump the USD as well. In 2011, he was brutally killed by a US-led coup. Syria has also dumped the dollar, and it is no coincidence that the US is now actively trying to overthrow their government. 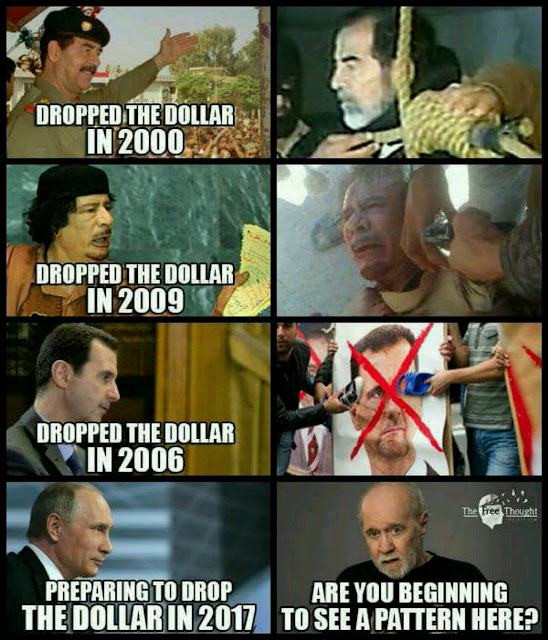 Almost every country the mainstream media portrays as an enemy has something to do with the Petrodollar. China and Iran are also attempting to dethrone the US as world hegemony by dumping the dollar as well. Increasing tension between the US and North Korea is really about the US wanting to put pressure on China. If the US could invade North Korea, it would put them on China’s border and one step away from military engagement. China knows this, which is why they have said they will take North Korea’s side if the US were to attack.
US war is not about building democracy, fighting terrorism or for humanitarian purposes. It’s all about money and power. US foreign policy may seem confusing at first, but once you learn how the Petrodollar System works, it all becomes clear. More countries are prepared to destroy the system and dethrone the US as the number one world power. Will the US submit to being number two, or will they continue to use their militarism to protect the system?

See also  Doug Casey on the Real Reason Why the Mainstream Media is Dialing Up the Fear
See also  DAVID SOLWAY: Reason to Fear a Vaccine Mandate.
1,820 views

6 thoughts on “The Only Reason The US Goes To War”