TIME magazine has named its Person of the Year, a teenager who skipped school to travel around the world telling people that they are horrible and the planet is doomed. It’s a living. Perhaps her Malthusian visions will be fulfilled by future experience. But it’s not very likely.

In fact, her position is at odds with what we know: that a more responsible approach to climate requires action from China and India, not the West. But that makes for less convenient judgmental events, what with having to ride a catamaran across the Pacific instead of the Atlantic. She sticks to challenges with less risk, like speaking to groups of people who entirely agree with her.

-A belief that the world is round and an admiration of the statesman’s view of all the world.
-A general distrust of the present tendency toward increasing interference by government.
-A prejudice against the rising cost of government.
-Faith in the things which money cannot buy.
-A respect for the old, particularly in manners.
-An interest in the new, particularly in ideas.

In keeping with that mission, the Person of the Year we ought to hail is the protester in Hong Kong.

Time founder Henry Luce (1888-1967), whose parents were Presbyterian missionaries to China — Luce was born in Tengchow, China — used Time magazine to push back against communist China in the postwar 1940s and ‘50s. But his worldview hasn’t been part of Time since the Kennedy era.  Like the NBA not wishing to anger their Chinese masters, perhaps today’s “woke” Time staffers were worried that celebrating the Hong Kong protestors would be too embarrassingly close to the magazine’s roots as a center-right anti-socialist publication. 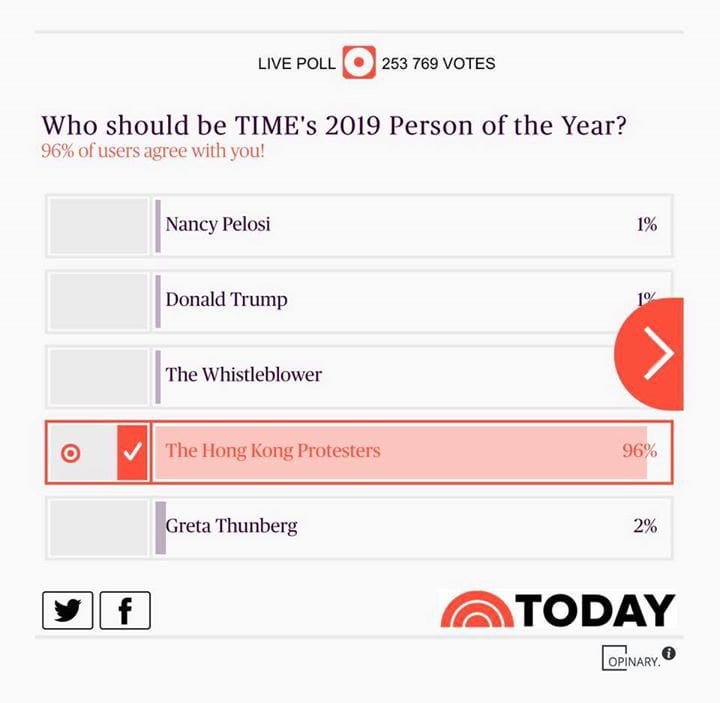