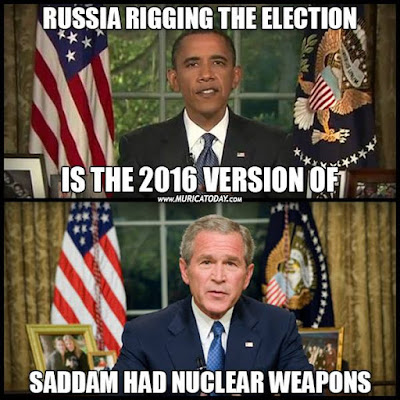 There is zero evidence of any wrong doing by Trump or any of his staff, or any evidence of Trump-Russian collusion, or any evidence of “Russia hacking the election”.
Obama had the full powers of the NSA, CIA and FBI spying on Trump and his team for most of 2016 and came up with zilch.
Hillary and her campaign team were looking for dirt on Trump for a year, using British spies linked to MI5/MI6, Ukrainian Neo Nazis and Estonians and who knows who else, and came up with zilch.
If there was anything to be found it would already have been found and been front page news across pretty much every Corporate “news” outlet, months ago.
There is zero evidence of any Russian collusion. It is not a crime to talk to a Russian.
Trump Jr was set up with bait of Hillary Clinton dirt by an anti Trump, anti Putin operative who had over stayed her visa by 5 months and who had links to the Dems and Fusion GPS who produced the fake Trump dossier.
Q: Why didn’t Hillary’s campaign team use the Trump Jr meeting before the election?
They must have known about it. Trump Tower where the meeting took place was under blanket surveillance.
A: Because rational independent voters would have smelt it was all BS a mile away and Hillary would have probably lost some votes over it, not gained any.
The DNC emails were LEAKED by a DNC insider who was pissed at the DNC corruption in rigging the primaries for Hillary.
Podesta’s emails were either phished or were leaked by someone in U.S. intel (e.g. NSA or CIA), or both, who didn’t like Hillary.
Nobody “hacked the US election”.
The emails contained the truth and revealed some of the massive corruption of Hillary, the DNC, Establishment Dems and the media.
The Establishment Corporatist Dems are screaming blue murder because some of their fellow AMERICANS leaked some of the truth about their massive corruption. (If the Corporate Dems weren’t massively corrupt, they wouldn’t have even considered nominating 100% corrupt Hillary.)
The only foreigners who interfered in the election were all backing Hillary. The Neocon UK government, the Neo Nazi government in Ukraine, and Globalist Corporatists like Merkel.
Hillary lost because she was such a terrible candidate and obvious liar who is 100% corrupt, committed treason by arming al-Qaeda and ISIS terrorists for Regime Change in Libya and Syria, promised to start WW3 with Russia and supported the Fascist Corporate power grab and job destroying TPP.
Enough independent voters, Sanders supporters, anti war people and people worried about their jobs in the mid West, refused to vote for the most corrupt, disastrous and anti America candidate in history.
Her campaign team were also completely corrupt and incompetent. They didn’t even bother visiting Wisconsin & thought the Nafta destroyed Michigan and Pennsylvania weren’t worth bothering with (but Trump made massive efforts in, including massive rallies in the 2 or 3 days before the 8th of November vote).
The whole Russiagate hoax is a complete fabrication to deflect from  the Establishment Dems corruption and the “liberal” media’s massive collusion in trying to rig the election for Neocon Warmonger and Globalist Corporatist Fascist Hillary.
Insane Neocons like John McCain, Lindsey Graham and Bill Kristol, among others, have jumped on the band wagon to push for an insane hot war and WW3 with nuclear armed Russia which is directly against the interests of Americans.
The warmongering Corporate owned media are of course going along with the lies and BS propaganda, just like they all went along with the massive and very obvious BS and lies Bush/Cheney told to get public support for the 2003 Iraq invasion.
Reference Articles
The DNC & Podesta emails were LEAKED and not hacked
ian56.blogspot.co.uk/2016/12/summary-of-evidence-so-far-on-alleged.html
Compilation of evidence of Hillary Clinton’s lies, criminality and treason over the last 30+ years
ian56.blogspot.co.uk/2016/01/hillary-clinton-im-running-for-goldman.html
Hillary Clinton’s disastrous decades long record of corruption and warmongering
ian56.blogspot.com/2016/07/hillary-clintons-disastrous-decades.html
Arming al-Qaeda terrorists for Regime Change in Libya
ian56.blogspot.co.uk/2014/07/why-libyan-civil-war-of-2011-happened.html
Arming al-Qaeda & ISIS terrorists for Regime Change in Syria  and the attack on Benghazi
ian56.blogspot.co.uk/2015/11/arms-smuggling-to-syrian-terrorists-and.html
Russian lawyer Veselnitskaya Facebook page filled with anti-Putin, anti-Trump posts
www.theamericanmirror.com/russian-lawyer-veselnitskaya-facebook-page-filled-anti-putin-anti-trump-posts/
Russian Lawyer Natalia Veselnitskaya was in the Country Illegally because Obama let Her in & Let Her Stay
freedomoutpost.com/russian-lawyer-natalia-veselnitskaya-was-in-the-country-illegally-because-obama-let-her-in-let-her-stay/
How Russiagate Met the Magnitsky Myth
consortiumnews.com/2017/07/13/how-russia-gate-met-the-magnitsky-myth/

4 thoughts on “The Russiagate Hoax”