In 1992, the CBOE hired Robert Whaley to develop a tradeable volatility product on equity index option prices. A year later, in 1993, the VIX was born when the CBOE started publishing real-time quotes on the implied volatility of the calculated S&P 500 index options. In those early days, I very much doubt Robert ever imagined his volatility index would someday be the cornerstone of some of the world’s most actively traded ETFs. In fact, for the next decade, no VIX instruments traded at all, and it wasn’t until 2004 that the VIX future was listed. And then, it took another five years before the first ETF based on those futures hit the exchanges. But what a ride it’s been. 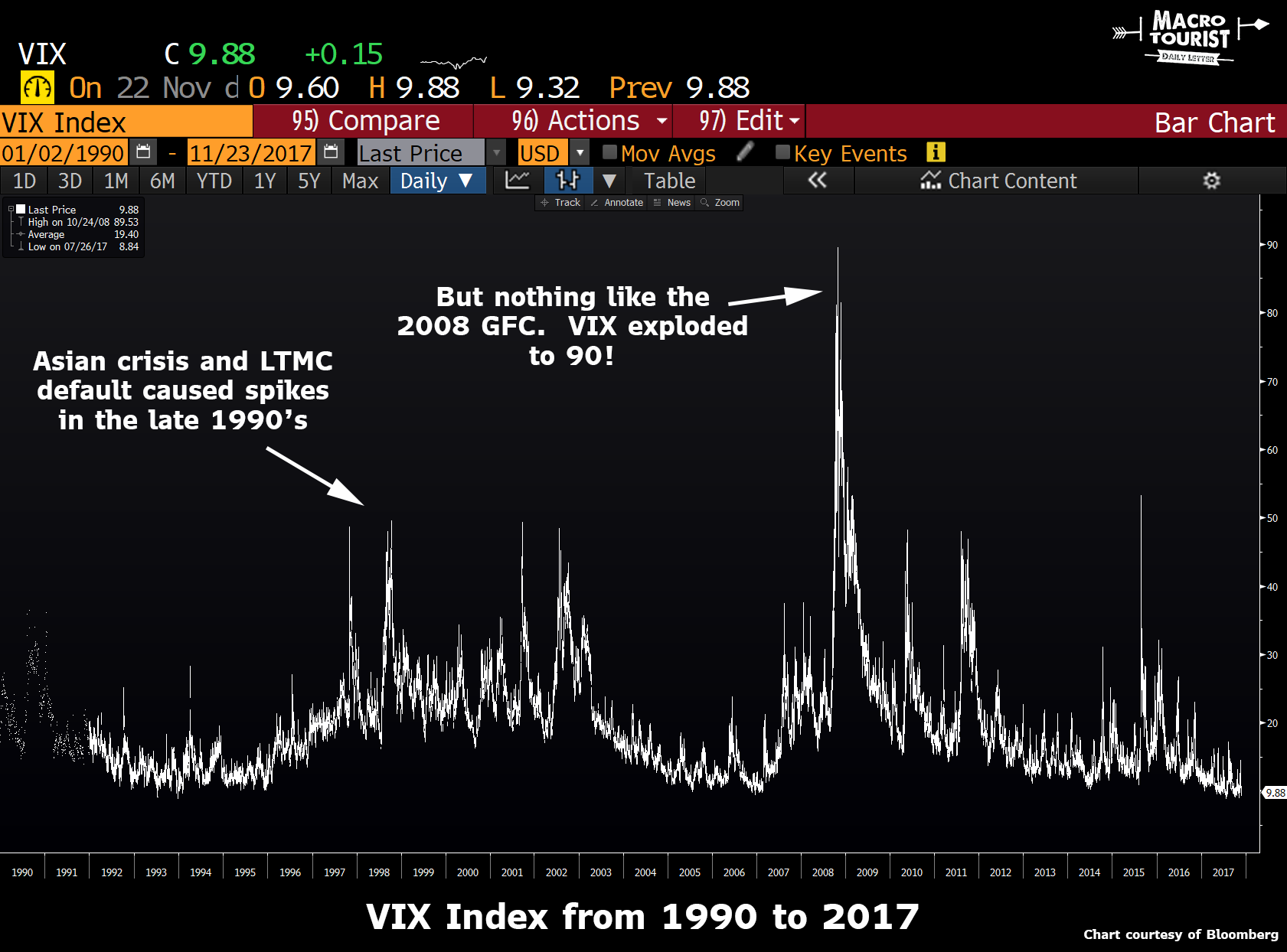 It had spiked during other crises, like Long Term Capital Management and the Asian crisis, but nothing like 2008. 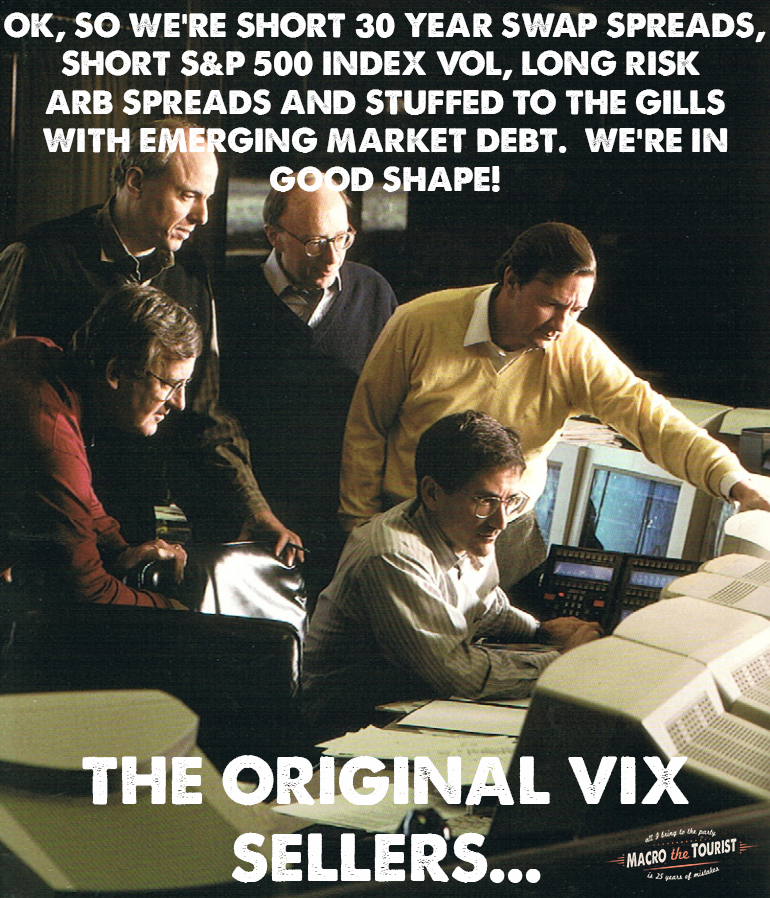 The Great Financial Crisis saw VIX explode to over 90. It was truly mind boggling. The amount of future volatility the market was pricing in was unprecedented. No one trusted anyone, the financial system was imploding, and everyone was desperate to buy insurance.
www.zerohedge.com/news/2017-11-23/source-next-crisis
Here is a chart of vix, set it to 1 week and zoom out.
www.investing.com/indices/volatility-s-p-500-chart
I posted this not long ago, its pretty in depth but shows shorting vol is a larger phenomenon than just playing the index. With markets so overbought and vol so low I wonder if the bear market will open with a crash (or maybe the whole bear market will be a crash)?
static1.squarespace.com/static/5581f17ee4b01f59c2b1513a/t/59e8a9b0e9bfdfb287faa3d2/1508420022032/Artemis_Volatility+and+the+Alchemy+of+Risk_2017.pdf
How might Bitcoin/cryptocurrency prices crash irreversibly?

This is one scenario in the blockchain industry that I believe is possible, but has yet to materialize. It’s my one big fear of the industry.

In natural systems, there is such a thing as a complete collapse. For example, there’s a famous case of reindeer that were introduced to a new environment, with few prey, and just kept growing and growing and growing… until total collapse happened.

The Party Is Over for Australia’s $5.6 Trillion Housing Frenzy

The party is finally winding down for Australia’s housing market. How severe the hangover is will determine the economy’s fate for years to come.

After five years of surging prices, the market value of the nation’s homes has ballooned to A$7.3 trillion ($5.6 trillion) — or more than four times gross domestic product. Not even the U.S. and U.K. markets achieved such heights at their peaks a decade ago before prices spiraled lower and dragged their economies with them.

Australia’s obsession with property is firmly entrenched in the nation’s economy and psyche, fueled by record-low interest rates, generous tax breaks, banks hooked on mortgage lending, and prime-time TV shows where home renovators are lauded like sporting heroes. For many, homes morphed into cash machines to finance loans for boats, cars and investment properties. The upshot: households are now twice as indebted as China’s.
www.bloomberg.com/news/articles/2017-11-23/australia-faces-housing-hangover-twice-size-of-u-s-subprime-era
Two Biggest Risks Now Are China and Inflation, Market Veteran Says

www.bloomberg.com/news/articles/2017-11-23/beware-of-china-inflation-is-message-from-this-market-veteran?utm_content=markets&utm_campaign=socialflow-organic&utm_source=twitter&utm_medium=social&cmpid%3D=socialflow-twitter-markets
Upcoming Recession Fears Resulting in a U-Turn by the Fed 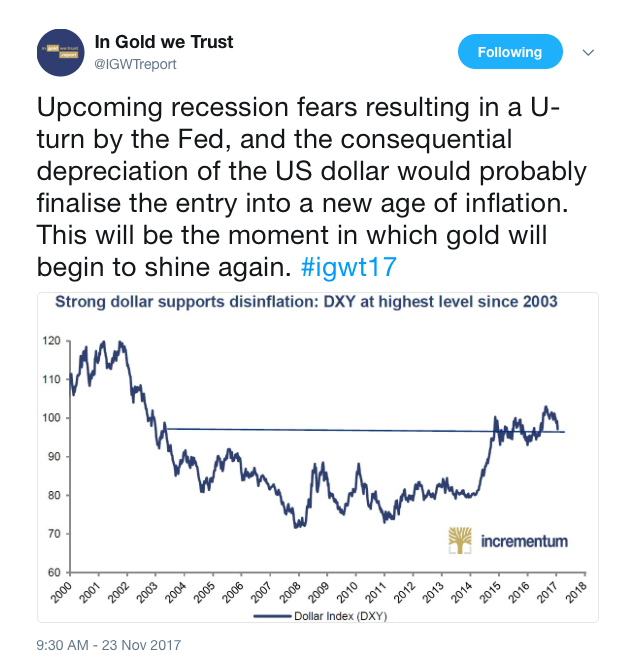 FED: Financial Markets Are Posing a Danger to the Economy
Here it comes again, The Fed and announces bubbles that they create a little too late. The Fed October minutes are out.
Excerpt: Federal Reserve officials expressed largely optimistic views of economic growth at their most recent meeting, but also started to worry that financial market prices are getting out of hand and posing a danger to the economy.
www.cnbc.com/2017/11/22/fomc-minutes–fed-officials-fear-market-imbalances-possible-effects-of-sharp-reversal-in-prices.html

1 thought on “The Source Of The Next Crisis:”