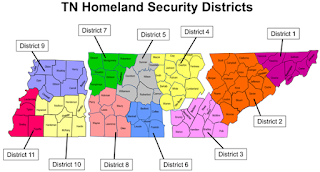 When a Tennessee Highway Patrol trooper ripped the mask off of a man who was video recording a traffic stop last week, I thought it was just another case of a police officer abusing his authority.

But this story was about to get a lot more disturbing.

Four days ago, WKRN reported that the Highway Patrol trooper had been fired for his actions, which is not the disturbing part. The disturbing part is, who fired him and what it reveals about the Feds controlling law enforcement.

After filing a complaint with the Office of Professional Accountability, Homeland Security made this announcement…

“It is the Department of Safety and Homeland Security’s policy to warn, suspend, demote or dismiss any employee whenever just or legal cause exists. Employees shall not commit any act that would reflect discredit upon themselves or the department while on or off duty.”

Apparently, the Office of Professional Accountability is now part of Homeland Security.

“The Office of Professional Accountability is charged with managing the investigative and disciplinary processes for the Department of Safety & Homeland Security.”

Try not to scream as you read how Homeland Security troopers should be courteous and professional in their dealings with the public.

“Employees of the Department of Safety & Homeland Security shall strive to be professional and courteous in their dealings with citizens. It is the desire of the Department that all of your contacts with our employees are professional. If not, we will aim to resolve the complaint in a prompt and objective manner.”

Recent news articles from across the country show just how courteous and professional Homeland Security employees are in their dealings with Black Lives Matter protesters.

“Welcome to the Tennessee Office of Homeland Security’s official website. Since the attacks of 9/11, our country and the world as we knew it changed forever. Our office is deeply committed to protecting all citizens of Tennessee from the criminal and terrorist threats that would damage our American way of life. Please take a few minutes to view our site and join our efforts in protecting our state and country.”

You read that right, apparently Tennessee’s state troopers are now tasked with protecting Homeland Security’s version of the “American way of life.”

What is Homeland Security’s version of American life? To suspect everyone and trust no one.

“If you see something, say something is a program designed to raise public awareness of indicators of terrorism-related crimes and/or unusual, suspicious or criminal activities, and to emphasize the importance of reporting suspicious activity to the proper state and local law enforcement authorities. If you see something suspicious taking place then report that behavior or activity by calling 9-1-1. An alert public plays a critical role in keeping Tennessee safe.”

Homeland Security’s state troopers are encouraging citizens to spy on each other because they do not trust anyone.

Below is a video of Homeland Security troopers protecting the American way of life from being videotaped.