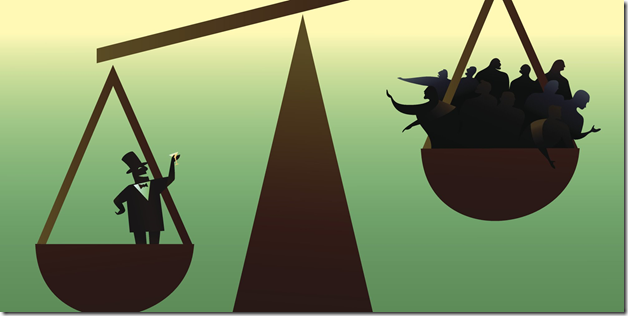 In the third quarter of the nineteenth century, when he was confronted with damning evidence of Tammany Hall corruption, William “Boss” Tweed famously challenged anyone who made such an accusation with this taunt:  “Well, what are you going to do about it?”   That’s how powerful and invulnerable Boss Tweed thought he and his cabal of cronies were.  They ran New York City with an iron fist and believed they could do whatever they pleased to line their pockets.  Tweed got away with his illicit gains for some time before justice finally caught up with him. Ultimately, he was arrested, convicted and incarcerated for his crimes and died a broken man in 1878.  But that was a long time ago and a different era.

The last major political scandal where justice was meted out to high-ranking federal government officials occurred almost a half century ago.  That’s when a bungled burglary at the Watergate offices of the Democratic National Committee, followed by an attempted cover-up, led to criminal charges against a number of Nixon administration advisors and operatives, many of whom did jail time.  Among those incarcerated was U.S. Attorney General John Mitchell.  Ultimately, President Nixon was forced to resign in disgrace.

Since Watergate there has been a disturbing drought in the prosecution of criminal cases against well-connected public officials.  Even more troublesome is the number of dubious cover-ups that evade criminal prosecution.  The vicious cycle, where crimes are committed and attempted cover-ups are repeatedly ignored, embolden those with clout to break the law because there are no consequences for them to fear.

Nowadays, justice never seems to catch up with crooked politicians even after they get caught red-handed trying to covering up their crimes.  It is said that the cover-up is worse than the crime.  That may be true, but what difference does it make if the original crime and the subsequent cover-up both go unpunished?  It just adds insult to injury.

A common characteristic of most high-profile unindicted felonies is that they usually involve top government officials, who steadfastly remain above-the-law no matter how much incriminating evidence is gathered against them.  And it makes no difference if they clumsily try to hide their crimes and get caught doing so.  The result is always the same: they get off scot-free, sporting shit-eating grins across their faces.  It seems that prosecutorial discretion exercised by the U.S. Department of Justice always deals a winning hand to powerful individuals after investigations into alleged criminal wrongdoing are completed.  This outcome confirms, with disturbing regularity, that our laws are not politician-proof.  The failure to prosecute is a privileged form of catch and release, which is only available to those with influence.

On the other hand, no such favorable discretion is afforded Main Street Americans who commit similar offenses.  For them, the hammer of justice comes down hard.  The unequal application of the law is a fact of life and Americans are none too pleased about it.  The anger and cynicism is palpable, especially for those unfortunates who are languishing in jail for committing crimes much less severe than those with the juice to have prosecutors look the other way.  The glaring double standard doesn’t simply offend the sensibilities of observers, it pisses them off.

To illustrate the point, let’s take a look at the Hillary Clinton email scandal and the DOJ’s ongoing probe into alleged Trump-Russia collusion, both of which have had their fair share of attempted cover-ups.  To date, no criminal charges have been leveled against any public official involved in these cases.

While she was Secretary of State, Clinton decided to use a private server to conduct sensitive government business involving classified information.  When this came to light after she left office, a congressional subpoena was issued to Clinton to preserve all records and files concerning the matter.  Unsurprisingly, Hillary interpreted the subpoena as a green light to do just the opposite and had her associates destroy tens of thousands of her emails.  In addition, the FBI could not locate any of the thirteen mobile devices Clinton used in conjunction with her two telephone numbers and her personal email domain.  From Whitewater to Benghazi, Clinton had demonstrated time and time again that laws do not apply to her.  So anyone with a pulse could only belly laugh when she said with a straight face that she only deleted emails involving personal matters unrelated to government affairs.  Nonetheless, her crude cover-up succeeded because prosecutors at the DOJ couldn’t recognize a textbook case of obstruction of justice when it was staring them in the face.

Next, we have Attorney General Loretta Lynch’s surreptitious meeting on a Phoenix tarmac with Bill Clinton while the investigation into his wife’s email case was still in progress.  If we are to believe Lynch, her conversation with Bill had absolutely nothing to do with the FBI’s ongoing investigation of his wife; it was just small talk about Bill’s new grandchild and mundane things like that.  Consider this another doubtful, yet successful, cover-up since Lynch faced no legal repercussions for failing to recuse herself from the Clinton case.  A few days later, FBI Director James Comey publicly exonerated Hillary Clinton of any wrongdoing.  We later learned that Comey had written the exoneration statement months earlier before Clinton and many of her associates were even interviewed.  Further, we learned that Comey carefully edited the exoneration to make sure Clinton would not be indicted.  Consequently, the top law enforcement official in the land doubled down on Clinton’s cover-up with his own cover-up making it back-to-back cases of obstruction of justice.  Once again, an outrageous cover-up was successfully implemented. And once again, no criminal charges were leveled against Comey or any of his associates for obstructing justice.  That’s exactly what happens when the fix is in.

Unbeknownst to the general public at the time, as the Clinton email probe was coming to a conclusion, top FBI and DOJ officials like Peter Strzok, Lisa Page, Bruce Ohr, Andrew McCabe and others were scheming to ruin Donald Trump’s election bid, and, if that failed, to cripple his presidency with a never-ending investigation into alleged collusion between the Trump campaign and the Russians.  As a result of congressional investigations and Freedom-of-Information-Act requests, a mountain of evidence has emerged that indicate the FBI and DOJ deceived the Foreign Intelligence Surveillance Act court by using a phony dossier funded by Hillary Clinton and the DNC to obtain and repeatedly renew a warrant to spy on the Trump campaign.  The FBI and DOJ continue to stonewall any attempts by congress and others to gain access to their files and records.  And, when the FBI and DOJ finally deliver selected documents, they are heavily redacted almost to the point of indecipherability, in many cases to avoid embarrassing or incriminating themselves.  Bullshit cover-up attempts, which have been exposed numerous times, are worth the try because no FBI or DOJ official has been criminally indicted thus far.  Although many of them have been fired, resigned, or retired, none have been charged with obstruction of justice.  In fact, many of them are prospering through book deals or GoFundMe donations.

So what does this mean?  It means that it’s probably a safe bet for public officials to risk breaking the law if they perceive it is in their interest to do so.  If they are suspected of committing a crime or are actively under investigation, the odds are in their favor if they try to cover-up what they did because it doesn’t matter if they are caught.  For them, there is no downside.  They are going to get off.

Crimes without consequences is a way of life for privileged public officials.  For these untouchables, crimes do pay and cover-ups, even lame ones, are risk-free.

Like Boss Tweed said, “What are you going to do about it?”