Becoming a successful billionaire is the dream of many Americans. But often times people are more impressed by the charitable actions of billionaires, rather than by their success. This may be why Forbes included a new philanthropy score to its latest 400 billionaires list. Take a look at our chart below to see the wealthiest 30 Americans and their philanthropy score. 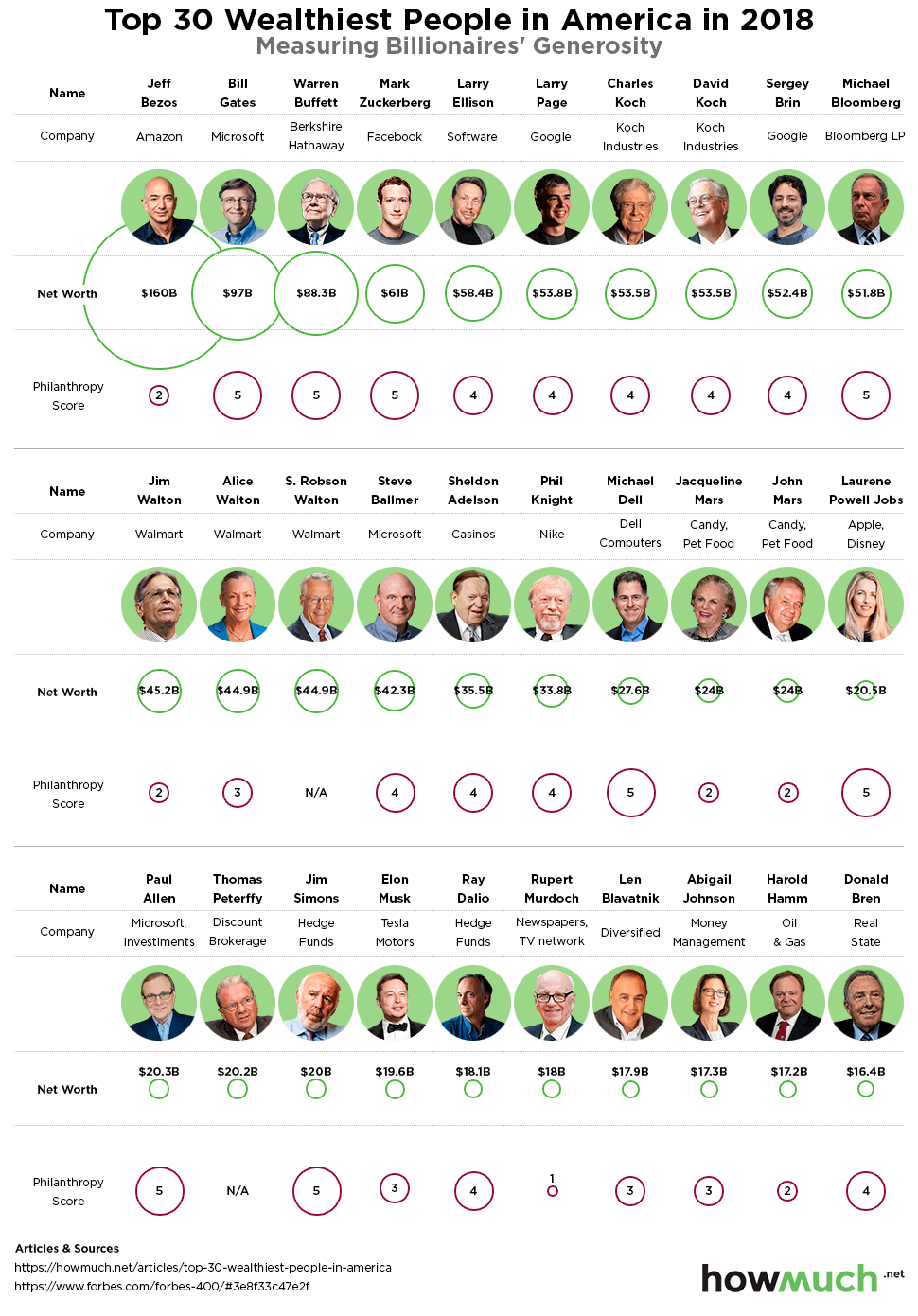 In the graphic above, the 30 wealthiest Americans are ranked from left to right. Each billionaire is represented by their name, the means by which they made their money, net worth and the new philanthropy score. The larger the billionaire’s net worth, the larger the green circle becomes. Philanthropy scores are measured on a scale of between 1 and 5, with 5 being the most philanthropic. If no charitable donations could be found, a philanthropic score of N.A. is applied. The data were collected from Forbes.

The new Forbes 400 list had an unsurprising change: Jeff Bezos – the founder, chairman and CEO of online retail giant Amazon – has supplanted Microsoft co-founder Bill Gates as the world’s richest man. According to Forbes, Bezos has added $78.5 billion to his net worth in the past year, giving him a total net worth of around $160 billion. Bezos has received a lot of attention in 2018 for his meteoric rise, but his philanthropy score of 2 is far from the highest. In fact, the next three richest billionaires – Bill Gates, Warren Buffet and Mark Zuckerberg – all have a philanthropy score of 5, the highest possible score.

According to Forbes, the way the philanthropy score was derived partially based on a billionaire’s involvement with the Giving Pledge. The movement was created by Bill and Melinda Gates and Warren Buffet, with more than 40 other billionaires joining soon thereafter, in which billionaires promise to give away half or more of their fortunes. Jeff Bezos is not part of the Giving Pledge, which may help to explain is relatively lower philanthropy score.

There appears to be a correlation between the net worth of an individual and how much they give away to charity. The higher a billionaire’s net worth, the more they give away, not just in absolute terms, but in percentage terms as well. The further you go down on the billionaire’s list, the more ‘N/A’ philanthropy scores you see, as well as generally lower philanthropy scores in general. Forbes mentioned that in order to get a philanthropy score of 5, a billionaire had to give away at least $1 billion and/or 20% of their net worth. By that measure, only 29 of America’s 400 richest met that standard. George Soros gave away more than any other at a total of $32 billion, or 79% of his wealth, given to charity.

Jeff Bezos may now be the richest man in the world, but he is far from the most charitable. Billionaire’s are known for their philanthropy, but when it comes to charity, not all billionaires are created equal. If you ever become a billionaire sometime in the future, remember to give away as much as you can to get your philanthropy score to 5!