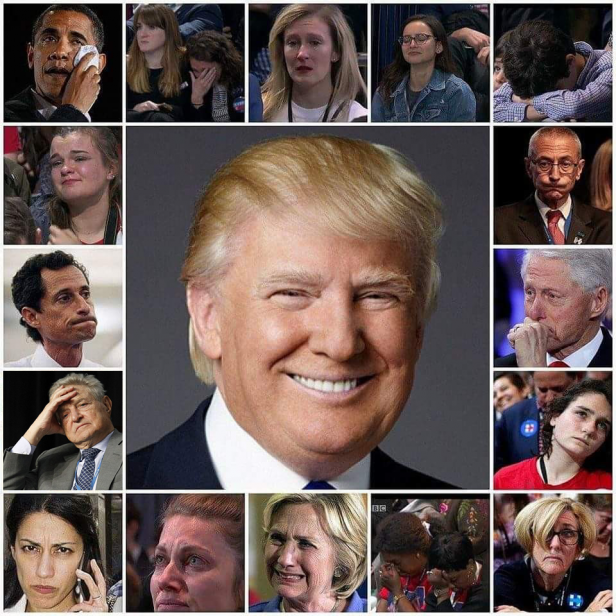 The corporate left wing mainstream media together with their Democrat masters are currently working on force-feeding the American people with one of the biggest lies in history. Here are a couple of examples to see the sad state of affairs of our mainstream media courtesy of Matt Drudge:

OBAMA KEPT THEM IN CAGES
WRAPPED THEM IN FOIL

So, the logical question is, what’s going on? Okay, Trump is literally Hitler for enforcing the law of the land, he’s a child abuser, and America’s detention facilities at the border for children are worse than Auschwitz or Birkenau, at least according to crazy leftists, like that creep Michael Hayden, the former director of CIA, who posted this idiocy on Twitter:

Other governments have separated mothers and children pic.twitter.com/tvlBkGjT0h

This propaganda machine would make Goebbels proud. Do you know what former first lady Laura Bush wrote yesterday in an op-ed for the WaPo? Here’s the quote:

“I live in a border state. I appreciate the need to enforce and protect our international boundaries, but this zero-tolerance policy is cruel. It is immoral. And it breaks my heart. Our government should not be in the business of warehousing children in converted box stores or making plans to place them in tent cities in the desert outside El Paso. These images are eerily reminiscent of the Japanese American internment camps of World War II, one of the most shameful episodes in U.S. history.”

Funny thing, it was a Democrat President who did that to Japanese Americans, Franklin Delano Roosevelt respectively, a liberal icon. Another slight difference must be noted: FDR put American citizens in internment camps, not illegal aliens, who by the way have no right to be in our country. Also, compared to WW2 era concentration/internment camps, our detention facilities for illegal immigrant children are five star hotels. The mainstream media propaganda begs the question: if the detainment facilities at the border are so horrific, why isn’t CNN (or whatever fake news network) rushing there to videotape the American Auschwitz, for all of us to see and mourn? The obvious answer is that everything you see on the lobotomy box is fake news, a manufactured narrative that has no resemblance to reality.

See also  Bulls cannot be happy about this...

The truth is we spend almost $35,000 annually for taking care of each of these illegal alien children, and yes, the American deplorable end up paying the bill, to the tune of 1.4 billion dollars per year. We all pay for illegal aliens children’s food, lodging and clothing. These children receive 3 square meals a day, including ice cream sandwiches, breakfast/dinner buffets, pizza, chocolate chip cookies, Coke refills, also free clothing (athletic wear, Nike sneakers, pajamas), laptops/computers, they can play video games, they have movie nights,  swimming pools, soccer/baseball fields to play on, 6 hours/day of educational instruction, free medical care and so on and so forth. If that’s the left’s impression of a WW2 concentration camp, I know a lot of poor American children who’d like to sign up for that “horrific treatment”.

Not to mention that dear leader Barry from Honolulu, also known as Barack Hussein Obama, did the same thing, i.e. his administration separated children from their parents routinely, as illegal aliens entered the US. Why? Darn’, that’s the law, who would’ve thought? Back then, the entire left apparatus (the media-government complex) kept silent, refusing to criticize Barry’s “inhumane” detention policies. However, with Trump in the White House, it’s open season on virtue signaling. But we must understand the leftists: what else can they do? I mean, Trump’s presidency is not the catastrophe they hoped for, but quite the opposite (so far at least). And the left’s pipe dream of a blue wave in November seems to have dissipated like tears in the rain. So, the left resorts to fear mongering, yellow journalism and mass hysteria, to pull the wool over the eyes of the people stupid enough to listen to their lies.

See also  Facts about the fatherless

Also, the American left is trying to establish a very dangerous precedent: the 2-tier justice system (liberal Apartheid) I told you about in my previous piece:

“What the media and the DEMs are now basically saying is that American citizens who commit crimes can be separated from their children. But illegal aliens get special treatment, despite them entering the US illegally and criminally.”

The Democrat’s logic on the issue of open-borders/illegal immigration is very simple: these are their future voters, and provided there’s enough of them brought in, the US will permanently shift to the left side of the force. That’s why Trump cannot detain and deport them, nor prosecute or separate them from their children. The solution? Build that wall, implement mandatory E-verify, end chain migration, deport all illegals, parents and children alike, making sure they’ll never be “separated” again.  Who would’ve thought it would be that simple?

Trump seems to agree with me, i.e. keep families together, deport them together:

I wouldn’t have changed the policy, but what matters at the end of the day is that the illegals will remain detained. We know what happened when Obama let them all get released before their court dates: they never showed up for. I can’t wait to see how the MSM will spin this to make Trump look bad. I am willing to bet the DEMs will try and block it somehow. They don’t really want it fixed. They just want something to bitch about in regards to Trump.