The ultimate heresy in today’s world isn’t religious or political: it’s refusing to believe that technology can not only solve all our problems, it will do so painlessly and without any sacrifice. Anyone who dares to question this orthodoxy is instantly declared an anti-progress (gasp!) Luddite, i.e. a heretic in league with the Devil.

Even worse, if that’s possible, is declaring that technology is making our lives worse rather than better. There’s an entire industry devoted to cherry-picking data to support the One True Faith of Technology: a new miracle drug (never mind the side-effects or the fact that the drug only works on a relative handful of patients), a new energy source that will generate nearly free energy in near-infinite quantities (thorium reactors, though there is not yet a single one that’s operational), and the marketing of convenience: this new marketing gimmick will change your life–you can try on clothing in virtual reality, no need to go to the mall! Wow! Borrow more, buy more, throw more into the landfill–isn’t technology wonderful?

Meanwhile, back in reality, the previous “miracle drug,” statins, turn out to be useless in reducing heart disease and actively reduce health via a vast array of negative side effects: Do statins really work? Who benefits? Who has the power to cover up the side effects? (europeanscientist.com)

Heavily promoted “miracle drugs” make billions of dollars for the corporate owners, whether they actually improve health in the long-term or not. But the tech-will-fix-everything cheerleaders never get around to examining the spectacular failures of Big Pharma, or the catastrophic consequences of smartphone addiction (see chart below), or the impossibility of scaling technology without consuming vast amounts of resources which are already scarce.

This excerpt from my new book explains the absurdity of the tech faithful’s belief system: (The book is Will You Be Richer or Poorer? Profit, Power and A.I. in a Traumatized World.)

The belief in the ultimate goodness and inevitability of technological advances is often presented as a binary choice: one either believes that technology will eventually solve every human problem, or one is anti-technology and anti-progress.

Suggesting there are limits on technology is thus heretical: for believers, there are no limits.

Letâ€™s set aside the false binary choice and ask: are there intrinsic limits to technology, and if so, are we approaching any of these limits?

Technology cannot change the priorities and incentives of those who own it.Technology is only a tool, and people will use the tool to maximize their gain and optimize whatever incentives are embedded in the system. If chopping down irreplaceable tropical hardwood forests is optimized by the incentives to maximize profits, then thatâ€™s how technology will be applied.

Technology cannot repeal the laws of thermodynamics. Taking a pencil and extending the declining cost of solar panels to zero doesnâ€™t negate the physical costs of mining and smelting the ore, shipping the metal to a factory, fabricating the photovoltaic cells, assembling and testing the panels, transporting them to the installation site on vehicles that are expensive to manufacture and maintain, installing the panels, wiring them to inverters and other equipment, testing the system onsite, and returning to perform maintenance and possibly repairs. Since the expected life of the installed panels is 20 to 25 years, the entire expense must be repeated, plus the additional expense of removing and recycling the worn out panels.

READ  Our media are broken.

Even if robots perform all the work, robots are themselves resource- and energy-intensive. Robots are less like a computer chip (with declining marginal costs), and more like a car, an immensely complex and costly assembly of intrinsically resource-intensive components, electronics, computer chips and millions of lines of software coding.

Autos cost more than they did a generation ago for all these reasons. As cheap-to-access resources such as metals and minerals are depleted, the remaining ores are more costly to extract; regulations require additional safety features, and extremely complex software is increasingly prone to unanticipated errors.

All of these realities apply to autos, robots and every other complex, resource-intensive machinery.

To become more capable, machines become more complex and therefore more expensive to manufacture, test, maintain and repair. In a very telling edit of reality, those extolling the idea that robots will perform all of humanityâ€™s work in the near future overlook these intrinsic costs, and overlook the expensive realities of fixing even simple machines when they fail or break down.

A clothes dryer is basically a metal box containing a heating element and a drum that spins. An electronic board with a digital display operates the machineâ€™s cycles and controls. A dryer is thus far less complex than a robot, especially a robot that is capable of navigating the real world.

The dryer control board is relatively simple: a handful of low-cost commodity computer chips and a few circuit boards. Despite the relative simplicity, these boards fail with alarming regularity. This is also true of the electronics in ranges, washing machines and other appliances. The replacement board for the dryer is one-third the cost of a new dryer. Labor adds another third, so replacing the board is two-thirds the cost of a new dryer.

This reliance on cheap commodity electronic components results in the lifespan of modern appliances being measured in years rather than the decades of use formerly expected of purely mechanical appliances.

The ultimate cost of adding features (the functional value of which is often very much in question) is far higher than the sticker price of the new dryer. In the real world, technology has increased costs and consumed more resources for extremely marginal improvements (for example, ten choices of drying cycles rather than five).

Since advocates of robots claim robots will soon do all the work of humanity, consider the vast difference in cost between a robot that operates on a flat factory floor, repetitively attaching one part on a dryer assembly line, versus a robot that arrives onsite in the messy real world and is able to diagnose and repair a broken dryer.

The factory model operates on a flat floor; the repair robot has to navigate an irregular driveway and multiple changes in floor level. It also has to be powerful enough to lift the dryer off the washer (in a stacked configuration), move it to open ground, remove the top, perform the diagnostics, remove the defective board, retrieve the new board, install it correctly, re-assemble the case, test the repaired machine, then lift it back onto the washer.

To repair a dryer onsite, the robot will have to have the strength of a small forklift and a very high level of dexterity and precision motor control. The cost of adding each of these capabilities to a robot is extremely non-trivial, and it wonâ€™t ever drop to near-zero. Rather, it will only increase in cost even if commodity sensors and chips decline in price. The points of potential failure will proliferate with each new capability and each new level of complexity.

Finally, note that the robot itself is prone to the same kinds of failures that it is designed to repair, but due to its much greater complexity, repairing the repair robot could cost an order of magnitude more than just having a knowledgeable human repair the dryer.

Iâ€™ve performed this exact repair on my own dryer (only a few years old), and other similar repairs on other appliances: a name-brand range that turned on the oven at random times due to a failed low-cost commodity electronic sensor (less than two years old), and an expensive name-brand heavy-duty washing machine, less than a year old, that also failed due to a low-cost electronic sensor.

Complex devices are only as reliable and durable as their lowest-quality component. This is as true of robots as it is for any other device.

Yet even with me performing the labor, the parts for all these appliance repairs were expensive. Many less-handy people would have paid multiples of this already-high cost just for labor, while others would have bought a new appliance and had the (still-functional other than the one failed component) appliance hauled to the landfillâ€”a perfect example of our wasteful and expensive Landfill Economy.

Consider the hundreds of components in a so-called smart home designed to save energy and offer more convenience by networking sensors, cameras, appliances, locksets, servers, controllers, Wi-Fi chips and software.

The projected advances in security and convenience, many of which are questionable (e.g. just how much value is really added by a refrigerator that can order a quart of milk delivered once it detects a low level in the carton?) come at a very high cost in components, installation, service and repairs, because each of the hundreds of sensors, controllers, Wi-Fi chips are points of potential failure â€“ not to mention the risk of unauthorized remote access.

How long will these components last? How long before they must be replaced to function with a new software system? How functional will the system be if even one controller fails?

Given the extraordinary expense of installing and maintain this complex system and the marginal returns in convenience and security, how is this not another system destined for the landfill?

I have yet to find a true believer in robots will do all the work of humanity who has ever performed even a single repair of a complex system or device caused by a failed board, chip, sensor or software bug – and done so not on a clean factory floor but in the unpredictable real world.

Iâ€™ve also never yet met an avid believer in robots will do all the work of humanitywho has designed, prototyped, tested, manufactured, sold, maintained and repaired robots capable of climbing (or landing) on a roof, diagnosing the cause of a failed solar array, replacing the failed part and cleaning the panels, all for a total system cost thatâ€™s less than the relatively modest cost of a human repair person.

Technology can’t fix what’s broken, because what’s broken is our entire system. For more on this heresy, please check out the first section of my new book (free PDF) 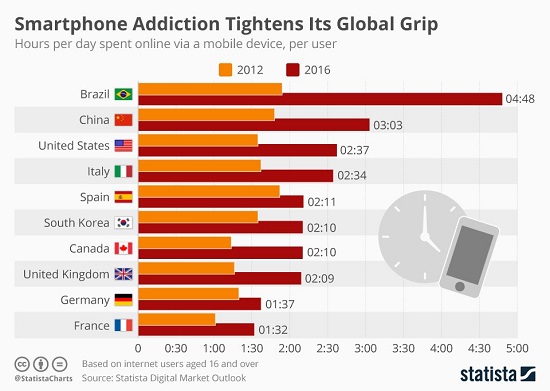 If you have an appetite for more heresy: read at your own risk….