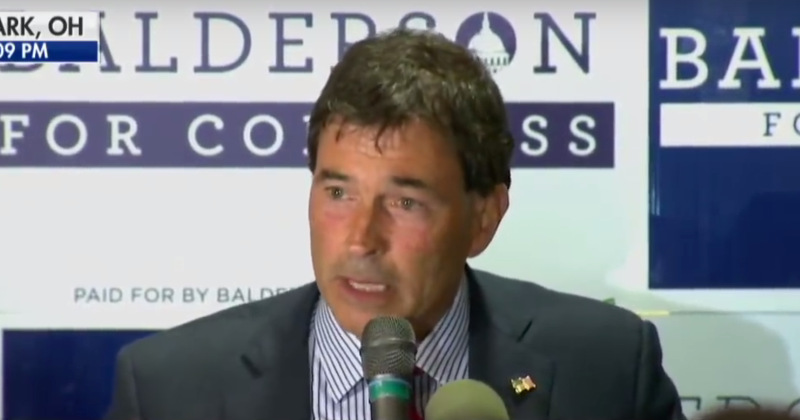 A great night in Ohio’s 12th Congressional District with Troy Balderson! Troy loves Ohio, and he loves the people of Ohio. He will be fighting for you all the way…

…Danny O’Connor is a total puppet for Nancy Pelosi and Maxine Waters – Danny wants to raise your taxes, open your borders, and take away your 2nd Amendment. Vote for Troy on Tuesday!

It’s worth mentioning that it was a very, but very close race in Ohio, yet Trump-backed Troy Balderson managed to emerge victorious in a dramatic fight over a vacant House seat during yesterday’s special election.  Republican State Senator Troy Balderson will now take over a House seat previously held by Republican Pat Tiberi, who resigned back in January, and took another job in the private sector.

When I decided to go to Ohio for Troy Balderson, he was down in early voting 64 to 36. That was not good. After my speech on Saturday night, there was a big turn for the better. Now Troy wins a great victory during a very tough time of the year for voting. He will win BIG in Nov.

Last night was a complete and utter failure for the Democrats, as their commie super-star Ocasio Cortez saw all the candidates she endorsed losing their primaries. Trump was definitely the biggest winner of the day, as 5 out of 5 candidates endorsed by the God Emperor of Mankind won their races:

Both parties spent buckets of cash for the Ohio special election on Tuesday, and I can’t wait to see the rematch in November between Troy and Danny, as they’ll run against each other in order to win a  full 2 year term. However, last night’s victory of the Trump-backed Troy Balderson carries major implications for the GOP seeking to maintain control of the House after November’s midterms.

Right now as I write this, CNN is saying this is a total loss for Republicans, because the race was so close. Republicans are screwed because the race was so close, even though they won. These people are from another planet. And check this out: now the Democrats are blaming the Russians for their loss in Ohio. Seriously, you can’t make this stuff up.

THEY ARE ALREADY BLAMING RUSSIA 😂 t.co/k3rQY14Eg0

Balderson defeated Danny by less than one percent of the vote, i.e. by 1,754 votes respectively. The Green Party candidate received 1,127 votes total. So, it was clearly the Russians, and screw math.

Funny how these people never support their arguments with facts. They just blurt out the nastiest thing that pops up in their fevered minds and leave the stage.

Milano, de Niro, O’Donnell, MeatHead, Streisand, Sarandon, Handler, Griffin, both Fondas, Cyrus and a number of others all have something in common. They expect everybody in America to take their outrageous, bitter emotional comments at face value. Because they’re limousine liberal celebrities, America’s pinnacle of human intelligence. Sorry. That horse left the barn years ago. Nobody cares what they think any more.

Bottom line: the madman did it. Again.