Building collapse in #WashingtonDC after strong storms move through @nbcwashington #DC One person was trapped for over 2 hours and finally extricated by @dcfireems pic.twitter.com/teKMlAa7hQ

As I already predicted earlier this week after the Miami incident, America is slowly becoming a third world country, and just like in third world countries, nothing works as it should, corruption is endemic and buildings collapse for no apparent reason:

Well, that’s an easy one: third world people who are replacing white Europeans courtesy of “democracy” and “these are our values bigot” bring with them 3rd world ideas. Why is the 3rd world a shitty place? Because shitty people with shitty ideas live there, doh. There’s no magic dirt in America, it’s the quality of the people who founded it. By 3rd world ideas, I mean affirmative action engineers, bribed inspectors, Chinese steel, vague regulations designed to protect builders, Mafia concrete, cheap (and unqualified) alien labor, or a mix thereof. So, welcome to the third world.

This time, a 5 story building collapsed in DC while under construction, which makes things even clearer.

So, my article was kind of prescient. Speaking about the collapsed building in Miami, the alleged president Joe Biden blamed Global Warming, as in the building collapsed due to the oceans rising, or some stupid shit like that. Or maybe it was racist white supremacists at work, who the hell knows?

I wonder who will be blamed this time.

A five-story building collapsed in Washington DC on Thursday, leaving several people injured, including a man who remained trapped under mounds of rubble for more than an hour, authorities said.

The structure, which was under construction, came down at around 3:30 p.m. as a severe thunderstorm rolled through the area.

Four construction workers were immediately pulled from the wreckage, and were all brought to area hospitals with non-life threatening injuries, fire officials said.

After about 1 hour and 30 minutes, rescuers were able to free a fifth worker who had been cornered under three floors of debris, officials said.

A K-9 was able to sniff out the spot where the man was trapped, helping firefighters get to him, WRC-TV reported. The man was alert and speaking with rescuers during the operation, and could be heard saying “Ow, ow” as firefighters loaded him onto a stretcher and into an ambulance, the outlet said.

Two homes to the left of the collapsed building were evacuated.

The cause of the collapse is under investigation.

A five story building is nothing to write home about; I mean, we used to build and design 200 story buildings 50 years ago, that still stand today.

For our young readers, here’s the deal: bridges and buildings did not use to collapse in America; this is a relatively new phenomenon.

If you ask me, the condo collapsing in Miami last week makes for a symbolic event: the dawn of a new era for America, where things break constantly.

You will have to start getting accustomed with this kind of stuff in the new America: bridges and building collapsing, and basically everything else not working as it should, or as it used to. In many ways, the US is now less functional than “legit” 3rd world shitholes, because we invited in more than 100 million third worlders in the past 50 years or so, and these folks were not the cream of the crop, but mostly, the worst of them.

The point being, well-off, educated and competent people do not usually want to leave their countries. But since the transnational cabal (and I mean that literally) ruling America decided to replace white people with better ZOG bots, they allowed low-quality people (some may say the garbage of the world) to enter and stay here indefinitely.

Donald Trump did not lie nor exaggerate when he said that countries like Cuba, Honduras, Chile or Mexico were emptying their prisons in order to send their lowest human garbage to America.

I mean, why not? It’s way cheaper for them to do so, and America just can’t say no to criminals.

On top of this human-resource problem, the US government is playing its part in sabotaging the infrastructure. Using the global warming hoax as an excuse, the federal government is actively shutting down food and energy sources.

For example, in Texas the government uses “smart meters” to shut down people’s AC systems while they’re sleeping.  This translates into children having health problems and people waking up sweating to death.

In New York, the government sends people text messages telling them to turn off their appliances in order to protect the power grid. 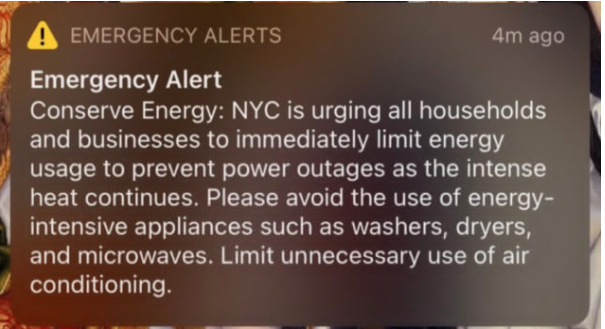 The Great Reset is Here: Federal Government at War With Farmers

There are numerous stories about the federal government paying US farmers to destroy their crops, and this is not a new thing by the way. Senile so-called president Biden is already threatening to tax the meat industry to death, with the end goal being what? We all become vegan? Or we should start eating bacteria and insects…

To make a long story short, this is the story of a civilization in the midst of collapse and everything is going to start getting very bad, very quick.

Be prepared, move out from the city and try to be as self-sustainable as possible.