It is hard to visualize how much $500M is in real life. Imagine giving away $100,000 to charity every week for the next 50 years and there would still be hundreds of millions left over. People with this kind of money are the captains of global capitalism. They can afford to live wherever they want and most undoubtedly own several different properties around the world. We created a new graph to better understand which countries are the most likely to be called home by holders of such unimaginable personal wealth. 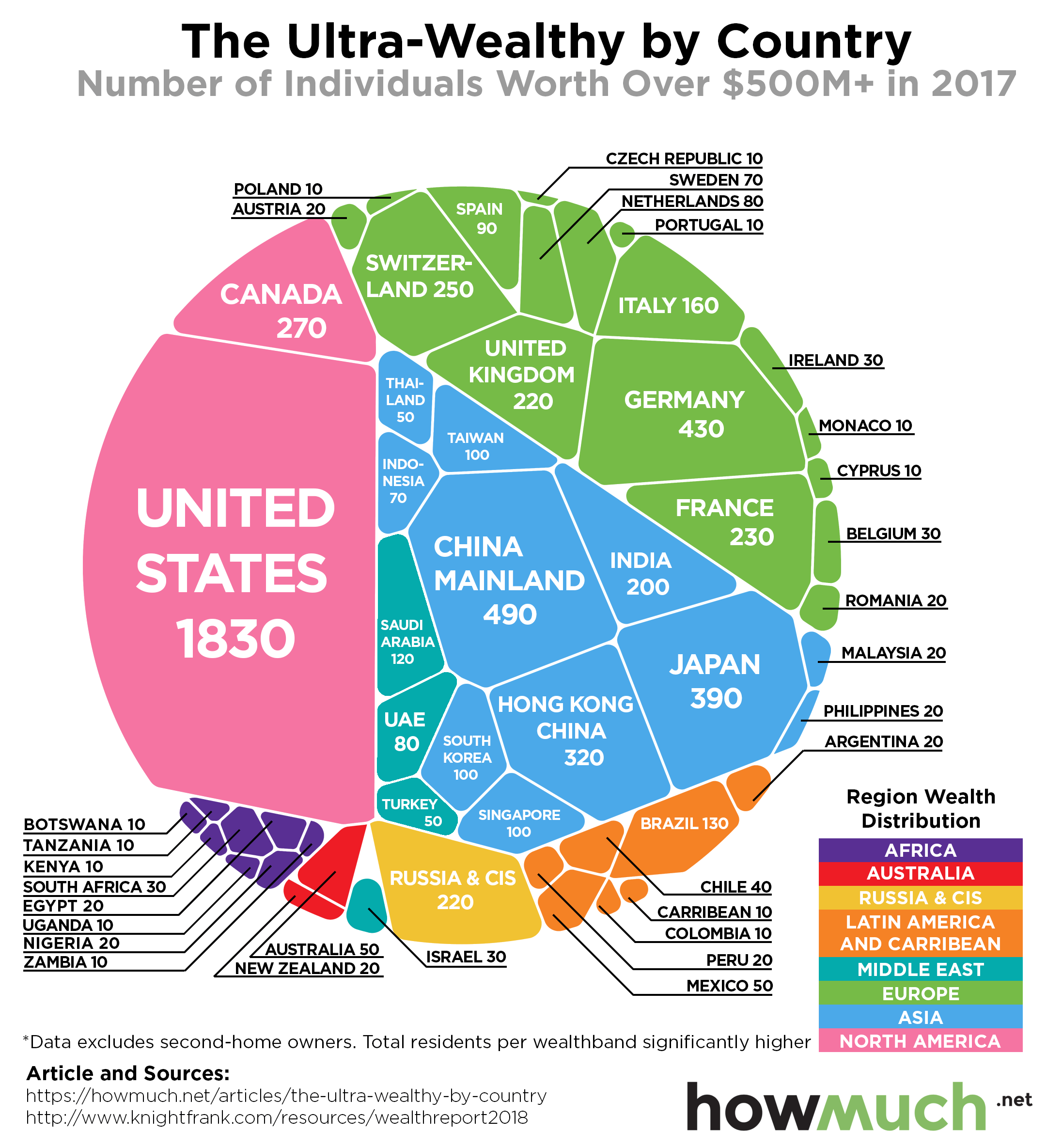 The data comes from Knight Frank, a real estate and property consulting company. They publish an annual Wealth Report analyzing the property, location, and attitudes of the extremely wealthy. Knight Frank counted the number of individuals with over $500M in personal wealth who live in each country. Each piece of our modified pie chart corresponds to the number of ultra-wealthy people with their primary residence in each county. We color-coded each country by continent, creating an easy to understand snapshot of the distribution of the ultra-wealthy around the world.

The U.S. immediately stands out as the most popular with 1,830 individuals worth over $500M. That’s more than four times as many half-billionaires as the second-place country, China (490). A quick note on methodology: we separated Hong Kong (320 people) from China for counting purposes. Though Hong Kong has officially been part of China since 1997, the situation remains complicated. Even if we combine mainland China with Hong Kong (810 people combined), it still wouldn’t be even half of the U.S. number.  Germany takes third place in the rankings with 490 people, followed by Japan in fourth at 390. Special mention should be made of Switzerland:  this small, landlocked country in the middle of Europe is home to 250 half-billionaires. We suspect the country’s notoriously private banking laws are the main reason so many of the 0.001% call it home.

Our chart clearly demonstrates that the ultra-wealthy are concentrated on three continents: North America, Asia, and Europe. What is it about these places that make them so hospitable to multi-millionaires? There are a few possible explanations. Every country with 100 or more of these super-rich individuals is a democracy with the rule of law. The two exceptions are China (which just passed a law allowing its president to remain inpower for life) and Russia (which just held an election widely seen as a sham by outside observers). Natural resources also allow countries like Saudi Arabia and the UAE to make the list, but the wealth just isn’t shared among nearly as many people.

Let’s take a step back. Here’s a list of the top 10 countries ranked in order of the number of people with more than $500M in personal wealth.

Studying the high end of the wealth spectrum reveals a lot about the global economy. People with that kind of money have the resources and financial freedom to live anywhere in the world, but they have often chosen to make their homes in a few select countries. By this measure, the United States seems to remain far and away the best place to live for the ultra-wealthy.