Americans have racked up almost $13 trillion in personal debt for things like mortgages, car notes and student loans. $13 trillion is an enormous pile of money, but here’s the kicker. That’s significantly better than the run-up to the Great Recession. Still, it’s hard to imagine what that looks like across the country. So, we created a new map to figure out exactly what’s going on. 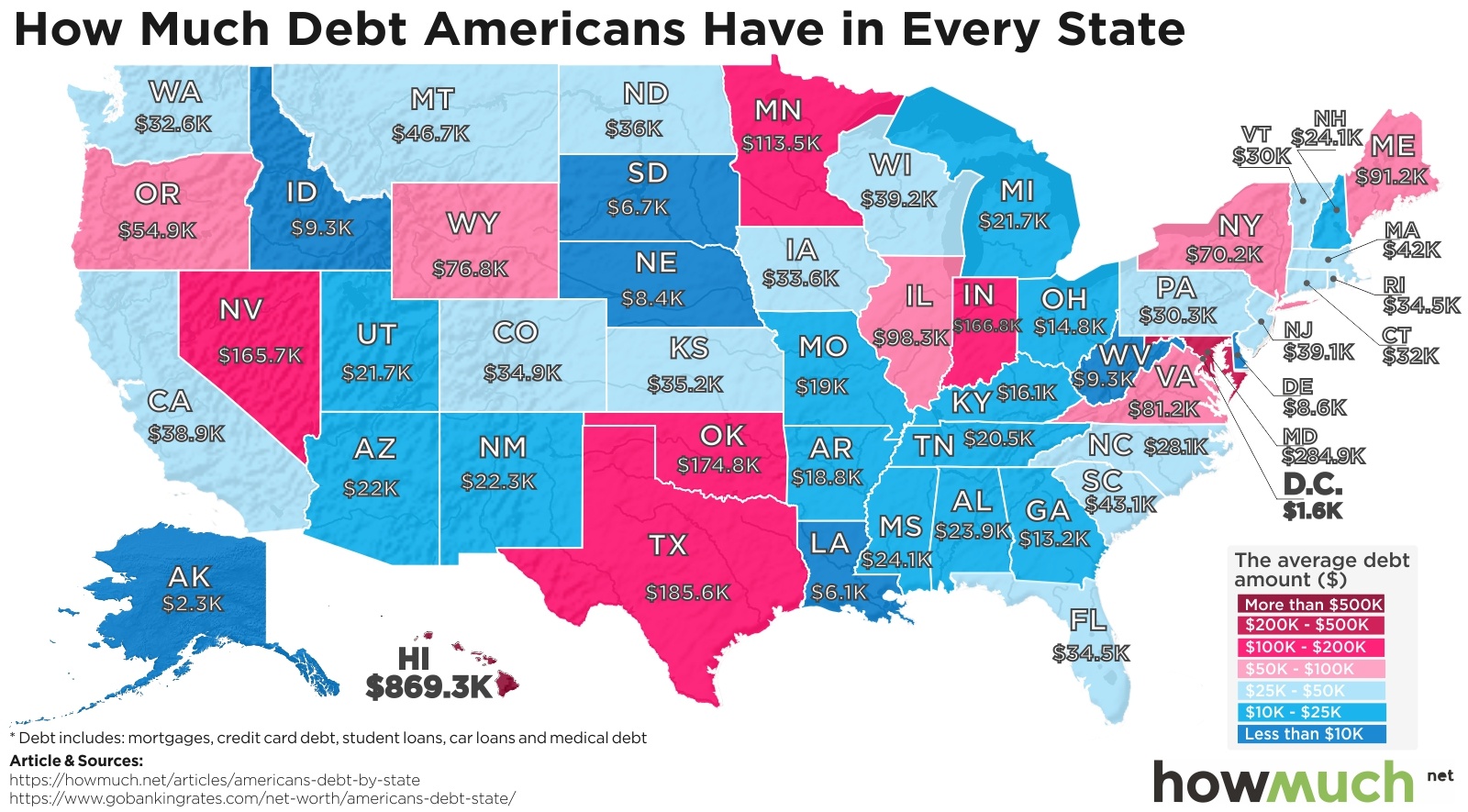 GOBankingRates recently conducted a survey in which they asked Americans how much debt they had. This included things like a mortgage, credit card debt, student loans, car notes and medical bills—basically every major category of debt. They broke the respondents down by state to calculate an average total debt load, which we then mapped across the country. As one can see, people living in states colored dark red and pink have higher debt burdens (as much as $500k) compared to light and dark blue, where the debt load is less than $50k.

Hawaiians have by far the highest debt, averaging $869,250. This makes sense considering the Aloha State’s location in the middle of the Pacific Ocean, and the fact that our numbers take into consideration mortgages. There’s only so much land someone can buy before demand outstrips supply and drives up price (the new land constantly created by volcanoes notwithstanding). People with the second highest debt burden live in Maryland ($284,851), but that’s almost four times as small as Hawaii. Further down the list, there are some obvious clusters of states, with five states surpassing $100k and an additional six between $50k-$100k. The rest all have lower debt levels.

There really isn’t a clear pattern on the map: there are low-debt states sitting right next to high-debt states. The lowest debt-burdened people live in Washington, DC ($1,611), followed closely by Alaskans ($2,286). What could these places possibly have in common? The one exception can be found in the Deep South, where a cluster of blue and dark blue states all group together. Louisianans have the third lowest debt burden in the country, averaging only $6,140 per person. Other than that, personal debt levels swing wildly from state to state.

Here’s the key insight. A few different factors explain the wide-ranging differences. For example, people living in New York City probably don’t own a car, and many still rent an apartment. Compare that to Texas and Oklahoma, where most people own a home in the suburbs from which they commute to work in vehicle they also own. Simply, put, lifestyle choices go a long way in determining debt levels. Not only that, there are good kinds of debt that build equity—like paying a mortgage—and add to overall net worth. Having very little debt is great if you consistently save money.

Top 10 States Where People Have the Most Debt

All of this suggests that average debt depends more on an individual’s choices than where he or she lives. People can achieve extremely low debt levels if they are in expensive urban areas or rural towns. If both the bureaucrats in Washington, DC and frontiersmen in Alaska can do it, then we bet you can too.