The arrest on Wednesday of a potential assassin near the home of Supreme Court Associate Justice Brett Kavanaugh is part of a surging trend of threats and violence against courts.

While rarely reported on, there were over 4,500 threats last year, according to the U.S. Marshals Service, which handled the arrest of Nicholas Roske near Kavanaugh’s Maryland home.

According to a newly issued Congressional Research Service report shared with Secrets, there were 4,511 threats on courts, judges, and jurors in fiscal 2021. The report said that represented an increase of 387% since 2015 “when there were 926 such incidents.”

Related: How the Left Learned To Stop Worrying and Love Domestic Terrorism. They always did love domestic terrorism. Look at what went on in the 1970s, often by people who now hold fancy academic positions.

They never opposed domestic terrorism. They just want a monopoly on it. 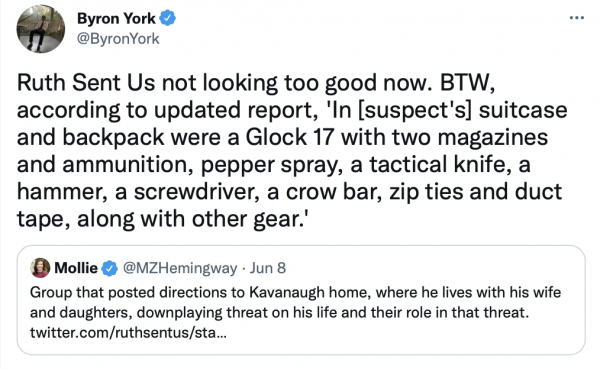