Dustin Nemos is one of those truth seekers I follow on YouTube, and he stays on top of all that is occurring around us.  He is intelligent and well versed. One aspect I have come to appreciate from him is his understanding of QAnon, as I have come to believe that QAnon is exactly who he portrays himself to be.

Here are the five “nuclear” options that China is currently contemplating:

1 ) A Currency Depreciation. A sharp, one-time yuan devaluation, like

the one Beijing unexpectedly carried out in August 2015, could be used

to offset some of the effect of tariffs.

2 )Sales of US Treasurys. Chinese authorities could sell some of its

large official-sector holdings of US Treasuries, which would lead to a

tightening of US financial conditions.

3 ) Block US services. Chinese authorities could limit access for US

companies to the Chinese domestic market, particularly in the services

sector, where the US exports $56 billion in services annually and runs a

4 ) Curb US oil shipments. According to Petromatrix, China is one of

the biggest importers of U.S. crude oil at 400kb/d, so any

counter-tariffs on crude could become very heavy for the U.S. supply and

demand picture. Such a move would weigh on U.S. prices and spill over to

global oil pricing. As Petromatrix adds, the market would need to start

of Iran sanctions as oil flows could be about the same.

well without them many things wouldn’t work. – of course ending their

monopoly on this could be a great thing long-term.

Has anyone watched nature, animals have something called threat

displays. Perhaps you’ve seen dogs get scared or angry and the hair on

the back of the neck stands up. Humans really are just overcomplicated

animals in many ways, We have such mental abilities but we continually

animal urges. We can fly in space, and yet we focus on resource

those who challenge us, and vying for positions of cultural authority

and attempting to move up the hierarchy of rank. You see it in chickens

with the pecking order, you see it in dogs with the alpha packleader and

alpha female. And you see it in humans with politics and the warrior and

The dollar is at the greatest systemic risk, ever. A collapse is

inevitable and will result in a new system, a new paradigm. It’s for the

best, but there will be growing pains for those not positioned correctly

read for vegas truth and status –

“Residents in Deerfield, Illinois have 60 days to surrender their

As you can see Laura Loomer has reported that ISIS was involved in the Las Vegas massacre.  I believe that Paddock was planning to sell his guns to ISIS. The FBI was planning to step in and catch ISIS, arresting them.  But something went wrong, and ISIS discovered what was occurring. They killed Paddock, and was, in fact, participants in the massacre.

However, there was another thing going on at the same time.  There is a video of Prince Salman being escorted from the Tropicana.  On the night of the October 1, 2017, during the Las Vegas Massacre, the video shows a group of armed guards escorting a protected person through the casino. Researchers believe the man being escorted, wearing the white shirt and pink sneakers, is the Crown Prince of Saudi Arabia, Prince Salman.

BELOW IS A COLLAGE OF PHOTOS OF PRINCE SALMAN.  COMPARE IT TO THE STILL ON THE LEFT. IT IS SURELY HIM. 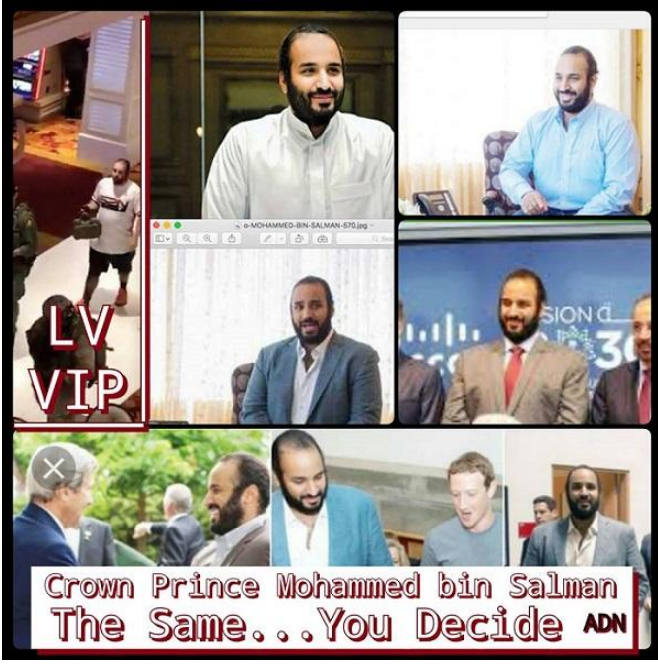 Prince Salman was to be assassinated by the opposing powers in Saudi Arabia, and they were arrested and jailed when he returned to Saudi Arabia.   However, they were present the night of the massacre, and they ran rampant throughout the night – just as ISIS did. This is what I believe.

I would like to share with you a very sobering video of Paddock taking the weapons upstairs to his room.

When I saw this,  I finally understood Paddock and what he was doing.  He is guilty of bringing those guns into his room, and I believe he was going to sell them to ISIS – if it is not that – then I believe he had joined ISIS IN JIHAD.  I believed that in the beginning, and I am leaning toward it again.

We will probably never know.

As far as the trade war with China, I see some difficult days ahead, but they are necessary.

A good idea is to stock up on everything you can, as supplies may run low.

See also  Developing Contagion: China's Debt Bomb Is Ticking Faster And Evergrande Is Just Part Of A Much Bigger Problem...

But to clean up the mess in America, President Trump has no choice but to make some tough decisions.  I support him in all he does.