by Umar Farooq
The greenback fell against the GBP and its other peers after Donald Trump told the Wall Street Journal its value is too high in part because China holds down its own currency. The dollar tumbled to its lowest level in a month while the Sterling posted its biggest rally against the dollar since the global financial crisis after May’s Brexit statement. 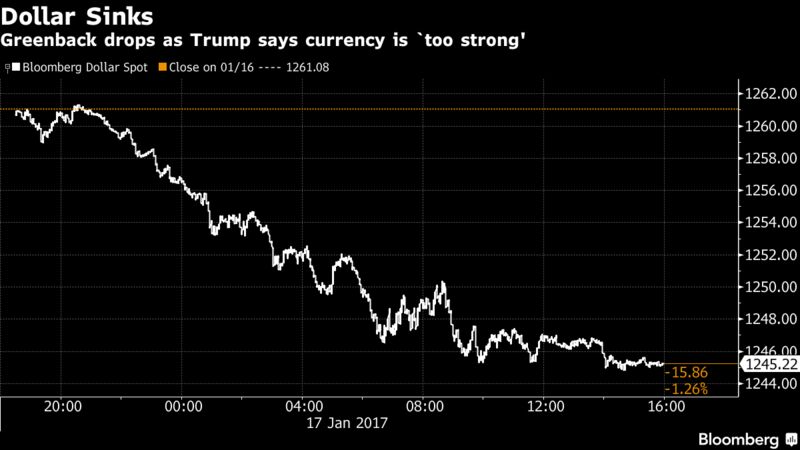 “The dollar is the guiding light at this point, and all eyes are on the shape U.S. policy will take,” said Fredrik Nerbrand, global head of asset allocation at HSBC Holdings Plc in London. “I would put today’s dollar weakness down to noise rather than a structural shift. If Trump wants to become as growth-generative as he’s planning to be and you don’t have the same fiscal push coming from the rest of the world, then it’s a question of where does the capital flow to. The dollar is the tallest pygmy.”
“The December CPI figures and a few important Fed speeches (including Chair Yellen) will tap the currency’s productive monetary policy theme. Other fundamental patterns threats to track include the Bank of Canada and European Central Bank rate decisions ahead. US earnings will offer up key company updates, but it hasn’t proven a clear catalyst in fourth quarter data. Risk trends remains a pent-up threat without release, but the catalysts are growing more numerous. The GBP/USD combined two of the most remarkable moves in the entire financial system this past session. A strong shift in Brexit speculation drove the Sterling on a charged rally while the Dollar suffered from the shifting focus of the President elect. The combined impact on the cable was the biggest single-day surge in over two decades. Given the nature of the fundamental cues for these individual currencies – and the pair in particular – traders should be prepared for a market that is far more sensitive to sparks of volatility. The combination of the biggest day’s rally in decades is a conspicuous contrast to the rebound from three-plus decade lows which will give both bulls and bears plenty to work with. How the market ultimately lays its path though will depend heavily on the fundamental motivations that have fueled the recent fireworks.” according to John Kicklighter.
However, moving ahead the greenback may find scope for a further recovery as December’s US CPI figures are published. Fed rate hike speculation may find renewed vigor if inflation is shown to have accelerated more than the markets are expecting (2.1 percent on-year), echoing the wage growth data that gave the US unit its most significant gain so far in 2017.