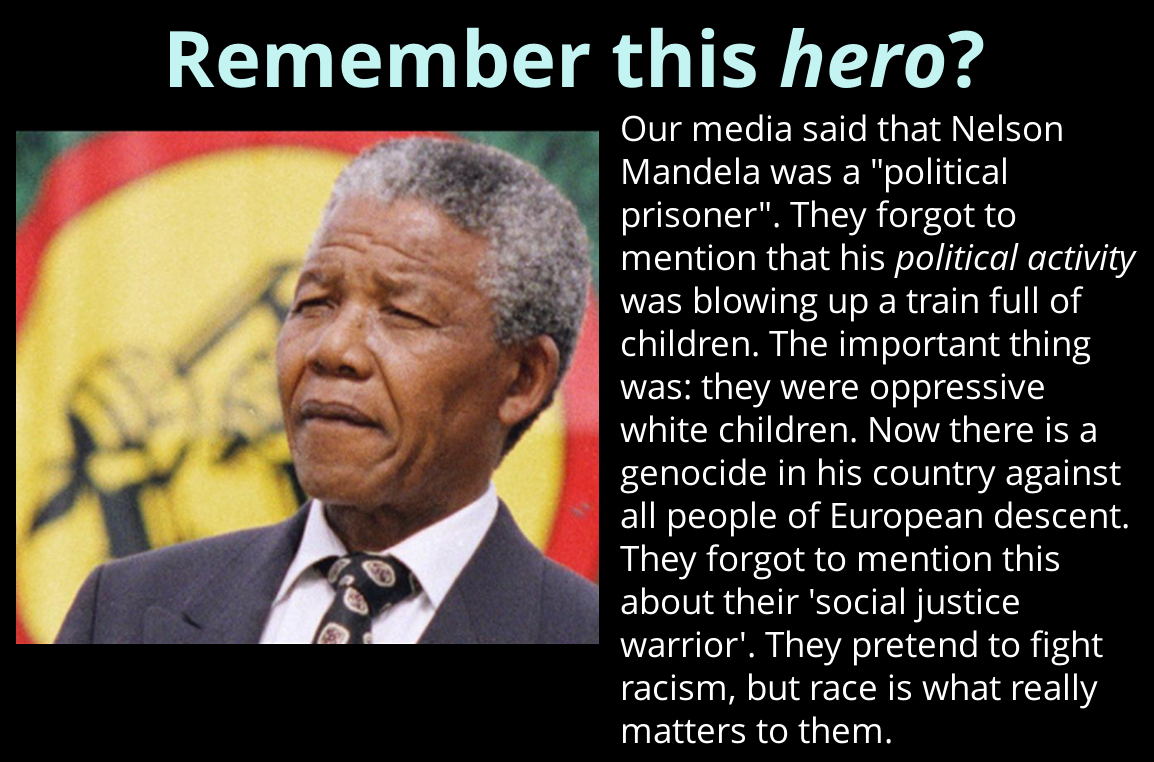 You know how these stories begin: President Trump went on to Twitter last night and tweeted:

I have asked Secretary of State @SecPompeo to closely study the South Africa land and farm seizures and expropriations and the large scale killing of farmers. “South African Government is now seizing land from white farmers.” @TuckerCarlson @FoxNews

The reaction from the South African government was prompt: they denounced Trump’s claim with regard to the large scale killing of farmers in South Africa, which by the way is completely true. The ANC, South Africa’s ruling party, is currently working on legislation which would allow the government to legally steal white-owned land via a Constitutional amendment or modification or whatever.  The land would be further distributed to South Africa’s black citizens, or at least that’s the theory, because “muh Apartheid” and “muh reasons”. See, only white folk can be racist.

White South Africans, also known as Afrikaners, are under 10 percent of the country’s population, and they own approximately 73% of South Africa’s agricultural land. Most land in South Africa is owned by the government, by a long shot, but since the climate is incredibly harsh, the vast majority of land is unusable for agricultural purposes, as it requires investment, irrigation, hard work, knowledge, and so on and so forth. White farmers own those lands since the 1700s.

South Africa’s president Malema reacted to the POTUS’ tweet that references Tucker Carlson’s report on the land-grab  by saying: ‘Only death will stop us, not Trump‘. He also went on accusing the “Jews” of training “right wing snipers”.

South Africa totally rejects this narrow perception which only seeks to divide our nation and reminds us of our colonial past. #landexpropriation @realDonaldTrump @PresidencyZA

South Africa will speed up the pace of land reform in a careful and inclusive manner that does not divide our nation. #landexpropriation @realDonaldTrump @PresidencyZA

See also  The life of the super-rich in Central Africa

So far, Australia and Russia are the only countries to offer asylum to South African farmers. The corporate mainstream media and  NGOs like the ADL are spinning what’s happening in South Africa as white supremacy, i.e. white farmers are lying, as they’re trying to promote a fake narrative of “white genocide” in South Africa. Here’s ADL:

“It is extremely disturbing that the president of the United States echoed a longstanding and false white supremacist claim that South Africa’s white farmers are targets of large-scale, racially-motivated killings by South Africa’s black majority”

When a leading member of the ruling African National Congress says he is “going to cut the throat of whiteness” at a political rally, that is a racial threat of violence.  When the ANC holds a rally and works the public into a frenzy saying that they will take white land through violence if necessary and fires a gun in the air to make the point, that is a threat of deadly force.

If white people are not suicidal and welcome their own genocide, they are racist white supremacists; the idea that it’s not possible to be racist against white people is one of histories most terrible lies and Trump’s only problem is that he is maybe 1-2 years too late to address this issue.

The ANC are true-blue socialists (really communists) and they have bankrupted the country through inept leadership and endemic corruption.  They are using “white” farmers the same as the Nazis blamed the Jews for all their problems. Confiscation without compensation is a communist policy and will lead to destitution as all socialist policies do.

Somebody please explain why after the bad ‘apartheid regime’ was ended and white Afrikaners surrounded their country to black rule, South Africa has been going down hill.

There is only one issue at play here, and that issue is racial hatred against Whites in South Africa, as demonstrated by this land grab masquerading as social justice.  Also, there’s the fact that the government of South Africa is fanning the flames of hate by encouraging violence. Many Whites have been slaughtered, beaten and raped, especially farmers, and  if nothing changes (or gets worse), it will prove to the world that Mandela’s vision was just fiction. That the Blacks in South Africa have no intention of anything peaceful. What they want is revenge, pure and simple.

See also  Bannon CPAC speech: "They want Trump in jail because they can’t beat him"

Back in 1974 the Rand was worth about $1.25.  Now it takes almost 15 Rand to buy one US dollar.  That’s all you need to know about South Africa post apartheid.

A nation of great natural resources, with once tremendous manufacturing and agricultural industries (they even had a space program and nukes) dominating regional foreign markets, world-class universities, has already gone down the drains.  I personally believe that to be primarily the result of socialism/communism of the ANC, and that idiotic Marxist dogma is leading back to racial tensions and hate on all sides. This is not going to end well.