via Slope of Hope 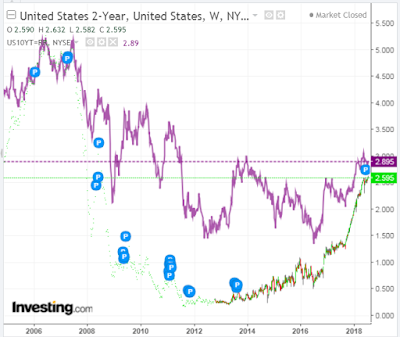 The next (longer-term) percentage comparison chart shows the weakness that ensued in the SPX when the 2-YT crossed below the 10-YT.

The following (short-term) percentage comparison chart shows that the 10-YT gained more this past week than the 2-YT.

Keep an eye on whether last week’s outperformance of the 10-YT was just an anomaly, or whether it may be a signal of a potential tightening of the spread between it and the 2-YR. If we see a continued narrowing of this spread, it may signal bad news for U.S. bank stocks, and, potentially, the SPX.

Watch for signs of weakness if:

On a more ominous note, if, longer term, we see a crossover of the 2-YR below the 10-YR on accelerating momentum, we’ll likely get quite an equity market downturn.