A reader in a previous article I did on the illegal immigrant detention center in Texas, asked me a question about the Wal-Mart centers. which closed in 2015 due to plumbing issues.

As I was trying to find an answer, I came across a list of Obama 2014 Detention Centers.  It states under them if they were implemented, failed, or under proposal. The list goes on and on, and it is only for unaccompanied minors.  Their parents sent them across the border alone – I cannot imagine that.

One must realize it is, in fact, the parent who is responsible for sending their children across the border alone, or bringing them across with them.

It is a nightmare that we must try to understand and manage in this Country under the leadership of President Trump.

When will this end or at least become manageable?  I think President Trump and Attorney General Jeff Sessions are trying to work out a very humane and manageable plan.

The parents must be detained in prison, while the children must be housed in a detention center as in Texas.  If you got a chance to review the video inside the children’s center, you would realize these children are getting the best care possible.

Relocations of Unaccompanied Immigrant Minors (Updated by NumbersUSA.com on 7/16/14 at 3:59 p.m. EST)

Latest updates: — Residents protest proposed facility in Syracuse, NY — Feds supposedly busing illegal aliens to Terrell Middle School in Houston in the middle of the night to avoid protests — Buses a no-show in Oracle after residents organized a protest — Residents of Littlefield, TX speak out against planned facility — LA Mayor wants to grow the city’s already enormous illegal alien population — Plans for a housing facility at Clarinda Academy in IA scrapped after state officials spoke out — Gov. of CT denies Feds a housing location in his state — Feds plan to house illegal aliens at luxury resort hotel — Mayor of Madison, WI tells city to be ready to house illegal aliens — Mayor of Davenport, IA looking into housing options for illegal border-crossers — Nebraska Gov. told the Wall Street Journal that 200 children were sent to his state without warning — Plans for a facility in Bryan, TX have been abandoned.

Note: Location is approximate, and refers to an ABANDONED Walmart, not the current one. dailycaller.com/2014/06/25/feds-eye-abandoned-wal-mart-for-child-immigrant-housing/

The government currently operates only one immigrant family detention center, in Berks County, Pa. Brane praised the facility, but said it can only house 96 people at most, and only for weeks or mo…

Reports now say that UACs have not been housed at the base yet, but they are on their way.  The federal government is considering a plan to house undocumented kids up to the age of 18 at Joint Base

After weeks of protests, the feds have temporarily suspended flights from TX to San Diego.  Illegal aliens on these flights were being bused to small towns in the area. www.utsandiego.com/new…

“Thousands of Central Americans were caught coming into the U.S. illegally…after being caught by border agents, they were detained in Texas, flown to Yuma, bussed to El Centro and then housed in ano…

The list goes on and on.  Whether it is unaccompanied minors or children with their parents, it is not any easier to deal with.

I just read an article that broke my heart, and I don’t know what we are supposed to do at this point.  How do we maintain our Country and take care of these people, too?

The story can be read at this link – www.nytimes.com/2018/06/17/us/immigration-deported-parents.html?action=click&contentCollection=U.S.&region=Footer&module=WhatsNext&version=WhatsNext&contentID=WhatsNext&moduleDetail=undefined&pgtype=Multimedia

A mother and her son were separated after crossing the border.  He was taken to a housing facility for children, and she was flown back to her home country of Guatemala.

When she was finally able to speak with her son by phone, he was cheerful.

“He shared how he was learning English, playing games and being well treated,” Ms. Ortiz said.

She told him to be good. They joked about an imaginary clown, who they always pretended slept between them in the bed they shared. But she said Anthony seemed worried — about her.

“Mammy, are they treating you well in the house where you are at? Anthony asked.

“Yes,” she said, knowing that he would not know — not until the shelter workers told him, and she dreaded how he’d respond when they did — that the house was in Guatemala.

Yes, it is so sad, but at the same time the child that she brought illegally across the border into the United States is being well taken care of.  However, we have to realize that the emotional trauma of being separated from a good and loving parent will be a mental health issue to be coped with at the shelter where the child is staying.  It is a job that is being filled by mental health professionals, who are very well trained.

The burdens of this world and this Country are massive with no end in sight.  All any of us can do is to listen to our hearts, stay focused in the present, and pray to God for help.

As far as the Wal-Marts which closed, I have no idea if they all have been used as detention centers.  What I found is Wal-Mart was sued years ago due to employing illegal immigrants as janitors.

I do think that some of the facilities had massive work done inside – unscheduled and poorly planned.

The employees protested, and some say the fact that the employees were protesting for higher wages is the real reason they shut down.

Here is an old article on trouble concerning Wal-Mart – 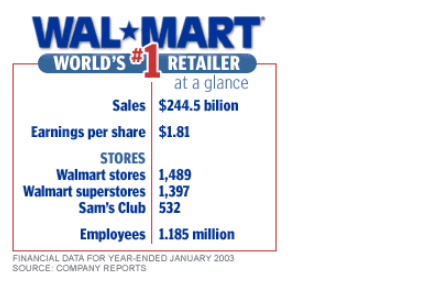 Federal agents picked up undocumented workers from Mexico, eastern Europe and other countries who were employed by several contractors used by the world’s largest retailer. Many of those arrested in the crackdown, which officials called “Operation Rollback,” were coming off night cleaning shifts at various Wal-Mart stores.

Garrison Courtney, a spokesman for the Bureau of Immigration and Customs Enforcement (ICE), said the raids started at 4 a.m. ET and ended about five hours later.

A search warrant also was executed at Wal-Mart headquarters in Bentonville, Ark., Courtney said, but he declined to provide details on what investigators were looking for or what they actually found.

“We are always looking at companies that are knowingly exploiting people for the purpose of making money,” Courtney said. He said businesses that employ undocumented workers often pay low wages and offer few or no benefits.

“We’re currently trying to understand the scope and the detail of the investigation,” Wal-Mart spokeswoman Sharon Weber told CNN. “We are talking to the [immigration bureau] and, of course, are committed to cooperating with them.”

Wal-Mart uses at least 100 outside contractors for cleaning services at about 700 stores across the country, she said. “We do require each of these contractors to use only legal workers. We do not know if the current investigation involves one or multiple outside contractors,” Weber added.

None of the people arrested were Wal-Mart employees hired by the company to work in its stores, she said.

But federal law enforcement officials said information from an undercover investigation revealed that some Wal-Mart executives and some store managers knew of the immigration violations.

Some of the information in the investigation was gathered through the recording of conversations between store managers and contractor executives, the officials told CNN.

Investigators are concerned that Wal-Mart has kept using contractors who have been convicted of hiring illegal workers in the past. The latest sweep stemmed from a 1998 investigation that also targeted janitorial contractors at Wal-Marts, federal sources said.

Courtney said the penalty for knowingly hiring illegal workers can run up to $10,000 per person. He declined to give the names of the contractors who hired the workers picked up Thursday.

People have to be authorized to work in the United States,” said Courtney. “We are serious about enforcing the law.”

The arrests on immigration violations involved no criminal charges. But sources said grand jury subpoenas have been issued in an ongoing investigation that could potentially result in criminal charges.

“It looks like these illegal workers were hired by contractors and not directly by Wal-Mart. Is this really bad press or slightly bad press? I think it’s the latter,” said Mark Mandel, analyst with Blaylock & Partners. “If Wal-Mart was hiring from sweatshops, that would be much worse.”

“Where this could hurt the company is in its reputation of not being a great place to work. If left unchecked, it could have an impact on Wal-Mart’s image,” said John Allen, senior partner with corporate brand consultant Lippincott & Margulies.

The largest numbers of arrests occurred in Pennsylvania and Texas, officials said.

So this was a big sting operation, and it landed Wal-Mart in a large amount of trouble with the government.

We have this article from 2014, in which it speaks of the Feds eying abandoned Wal-Marts as detention centers.

Inundated by a surge of illegal child immigrants that have been apprehended at the southern U.S. border, the Department of Health and Human Services is searching the country for large, empty facilities to house them.

The latest property up for consideration is a vacant Wal-Mart in Brockport, New York, near Rochester.

HHS will be conducting an “initial assessment” of the facility, according to U.S. Rep. Chris Collins, who announced the plan on Wednesday, according to WHAM.

According to Collins, the federal agency will inspect the store, which has been vacant for seven years, in order to “to determine whether it may be used as a facility for temporarily housing children who have come into the United States from other countries without an adult guardian.”

The Republican Congressman was critical of the plan.

“As I have said before, it is unacceptable the federal government is trying to force the hardworking taxpayers of New York to foot the bill to house undocumented immigrants,” said Collins in a statement.

He blamed President Obama’s immigration policies for the unexpected surge of the minors, called Unaccompanied Children, or UACs. So far this year, Customs and Border Protection has apprehended at least 52,000 UACs, most of whom are from Honduras, El Salvador, and Guatemala.

So you see the problem that President Trump inherited from the Obama Administration.

Democratic U.S. Sen. Chuck Schumer weighed in on the plan to bring UACs to New York as well, according to WGRZ.

“I will make sure that Homeland Security does not shove any decision down any community’s throat,” he said, adding that the Obama administration needs to “step up its game” in protecting the border while also addressing Central America’s humanitarian crisis.

President Trump is only trying to manage this huge humanitarian crisis which started with the Obama Administration.  The United States is overwhelmed, and that is the bottom line.

Under President Barack Obama, the US has deported almost two million undocumented immigrants, more than any of his predecessors.

Before being kicked out of the US, most of these people will spend time locked up in a detention center. Some have criminal convictions, but the majority are detained on immigration charges.

A little-known federal law enacted in 2006 ensures that a minimum of 34,000 undocumented immigrants must be held on every single day. Private companies run most of the centers.

In conclusion, I think I understand now, and I hope you do, too.