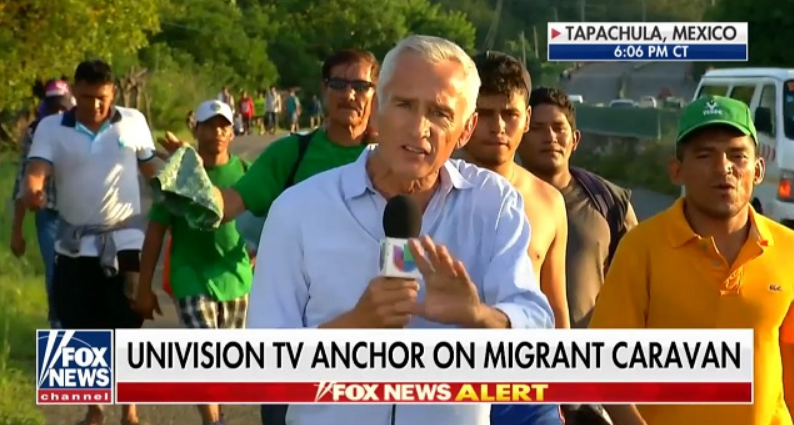 With every day that passes by since The Donald’s election, we’re reaching Orwellian-level news. Level up for the next story guys: Univision anchor Jorge Ramos, a guy who’s invited regularly by Fox News to talk about immigration issues, assured Martha McCallum during her Monday show that there’s no invasion going on, with regard to the now-famous migrant-caravan heading to the US, just in time for the midterms. Funny thing, as this shill was telling the Fox News host to chill out and stop believing her lying eyes, a sea of military aged men were passing behind him. This is directly from 1984 folks, you can’t make this stuff up.

.@jorgeramosnews on migrant caravan: “The vast majority of these people are not criminals, they’re not terrorists, and they’re not even immigrants. They’re refugees.” t.co/EQqFkX5ixB pic.twitter.com/8gsLOWaFQO

We’re reaching epic levels of craziness with these leftists. If you watch the full interview, you can see how hundreds and hundreds of military aged males pass behind Jorge (he has dual citizenship by the way, both Mexican and US), on the back of trucks or marching on foot.

While passing by the camera, several people, including women, can be seen covering their faces. One may wonder why… 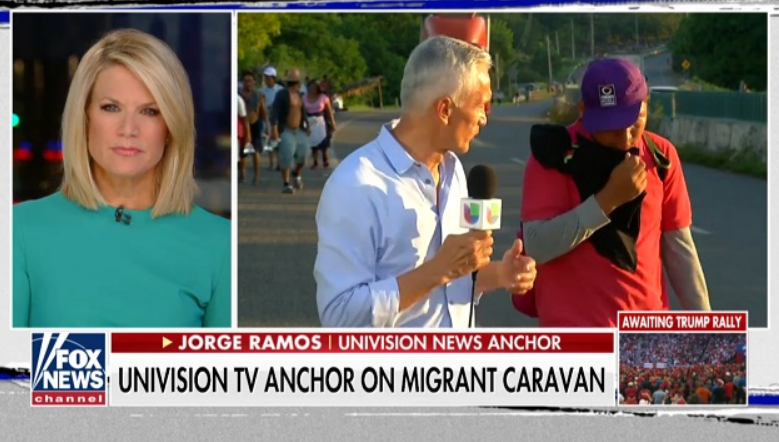 Univision news anchor Jorge Ramos said reports of an “invasion” of migrants toward the United States are being overblown by people like President Donald Trump. Ramos, who reported from Tapachula in the Mexican state of Chiapas — bordering Guatemala, said he watched migrants come by after crossing into Mexico. […]Ramos said Mexican law enforcement has been acting as “Trump’s police” in trying to stem the migrant tide.

They are not criminals, they are not terrorists,” he said of the migrants. “We have to choose what kind of nation we are.”

According to empirical evidence, about 80 percent of the “refugees” composing the so-called migrant caravan heading to the US from Honduras and Guatemala are military aged men, able bodied males under the age of 35 that is. According to Fox News reporter William La Jeunesse, approximately 1000 people have already applied for asylum in Mexico, and 80% of them are men under the age of 35:

Fox News reports that “about 80 percent” of those in the migrant caravan “are men under the age of 35.” pic.twitter.com/ggTs4HNugT

Looking at the videos, we can safely state that the 80% figure is a conservative estimate. Usually speaking, refugees fleeing war-zones and the like consist mostly of women and children. This is not the case, obviously, as these folks are welfare shoppers/economic refugees or whatever you want to call them, if not plain invaders. Multiple so-called refugees interviewed by Sara Carter acknowledged they are coming to US as economic migrants, and they’ve been here before.

Yes, Jorge Ramos is lying through his teeth, as usual.

Mostly men now crossing the #Guatamalen border –  rehearsed answer “this is not politics – this is about poverty.” There were women and children but they were at the front of the caravan (smaller numbers). None would say who the organizers are but several said it was organized. pic.twitter.com/MrojSwL3Ul

Questioning the caravan that crossed this afternoon from Honduras into #Guatemala. They were estimating how many were still at the border less than 7 miles from where I was at. pic.twitter.com/yf5rM7JsKq

If Univision Communications (check out to see who owns them: hint, they’re from NY and very kosher) is correct, there should be no problem when hordes of American men illegally enter Mexico, wave American flags and shout anti-Mexico slogans, cuss and flip the bird to Mexicans on the street, insult Mexican leaders, label all Mexicans as being Nazis, demand public welfare and asylum, and claim they are all “workers and soldiers” and not criminals.

Who else thinks that Mexico would get angry if American men did to Mexico what illegal alien Latinos do to the US? Remember: this is not an invading army, they’re the “victims”. Now shut up and pay your taxes, peasant. 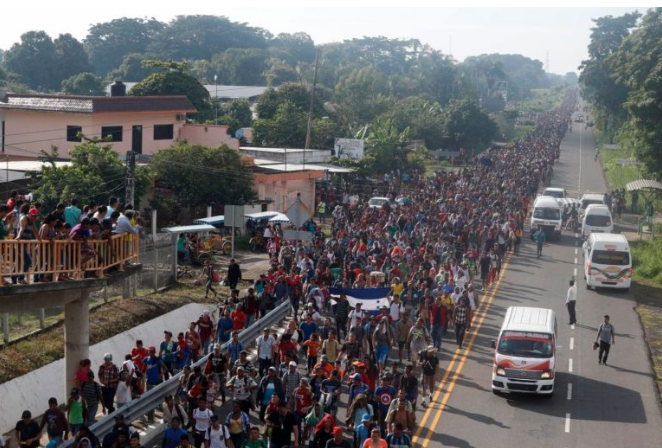 On the bright side of the news, Trump has said that there are Middle East terrorists infiltrated among the so-called refugees, along with MS-13 gang-bangers, and that he’s going to sent US troops to the border with Mexico to confront them. As many troops as necessary, he said. Let’s see how this plays out. This is all the justification Trump should need for permanently stationing military forces at the border until the wall gets built. The soldiers can permanently protect the border while Border Patrol can focus their resources on pursuing anyone who somehow slips through.