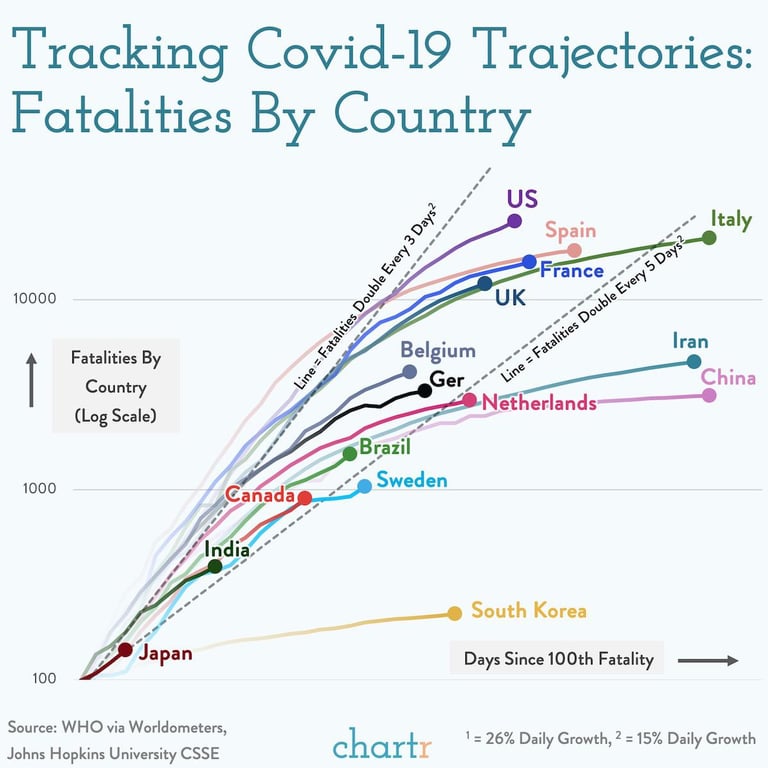 Updated version of the coronavirus tracker I made a couple weeks back. Initially inspired by the work of John Burn-Murdoch, this is now the 5th version of this tracker… and it has some good news! Curves ARE flattening… albeit slowly. Quarantine is working, let’s keep it up.

Initially sent as part of the chartr newsletter.

Answer to the question: “Why not run this per capita?”… The virus infects individual people one at a time, rather than proportions of a population, so it makes sense to track the spread in absolute terms. Population size only really affects the ceiling of how many people could catch the virus, not how fast it is spreading. Once all of this is over (ASAP hopefully) a per capita analysis may make more sense to give context to which countries were relatively most affected.

Answer to the question: “Why use a log scale?”… I try to avoid log scales wherever possible, but in this case we are more interested in tracking and comparing the trajectories of countries that could have very different absolute numbers of fatalities. Without a log scale, much of that detail is lost. E.g. Most of the countries below 10,000 fatalities would be hard to see, let alone gauge their exponential trajectory.