From the website of US senator for Alabama Jeff Sessions.
They forgot to mention that these figures tend to remain more or less permanent with Muslim migrants. A very small minority  integrate themselves into the job market or make efforts to educate themselves and get out of the welfare system, as many European figures show. Prophet Mohammed was orphaned, illiterate and jobless, sustaining himself on crimes. So education and employment is not an important factor. In addition, the Koran encourage Muslims to collect jizya – blood tax – from kafirs, the non-Muslims, and welfare is looked upon as jizya. Collecting money from non-Muslims is considered a legal entitlement since the kafir is not entitled to any land or laws of their own anywhere, meaning their presence on a land or country of their own is a “theft” of “occupation” of what should be Muslim land.

Illegal Immigrants Cost US 90 Billion Dollars in Welfare Subsidies! And Yet People Think Trump Is Unfair To Want Them All Out Of The Country?

The Bankers and Global Corporations trying to merge all nations into a global superstate can’t lose with illegal immigration in the United States, which is why politicians have done nothing to stop it.
Central Banks make money by funding the giveaways to illegals through manufacturing debt. Global corporations benefit by hiring much cheaper illegal immigrants to work in their US based sweat shops.
Its a win-win.
As the above map demonstrates, the US citizen is the one that carries the load. The myth that illegal immigrants do only those jobs that Americans don’t want to do is exactly that, a myth. As the chart below shows, they are taking away high paying jobs from U.S. citizens. 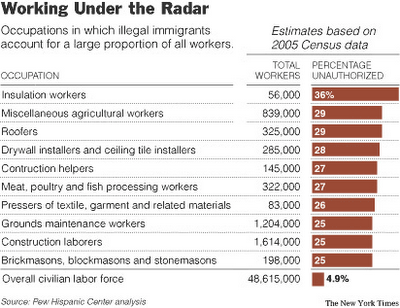 See also  Canada NWT had made it illegal for farmers to sell to the public, shutting down farm stands
Help Support Independent Media, Please Donate or Subscribe: Trending: Views: 57

6 thoughts on “USA: Muslim “refugees” – 91.4% on food stamps, 68.3% on Cash Welfare. They have to go back! Illegal immigrants cost us 90 billion dollars in welfare subsidies!”