Two Uvalde teens were recently arrested for Conspiracy to Commit Murder after officers said they foiled a mass-shooting plot the pair had schemed.

A press release obtained by KENS 5 thoroughly chronicles events leading up to an investigation performed by the Uvalde Police Department and the Texas Rangers.

In the press release, Uvalde Chief of Police Daniel Rodriguez said that a Morales Junior High School student, 14, and a former Morales student, 13, had specifically targeted numerous students in what they described as a plan to perform a “mass casualty event against the school.”

Authorities said the students were motivated in large part by the Columbine shootings. 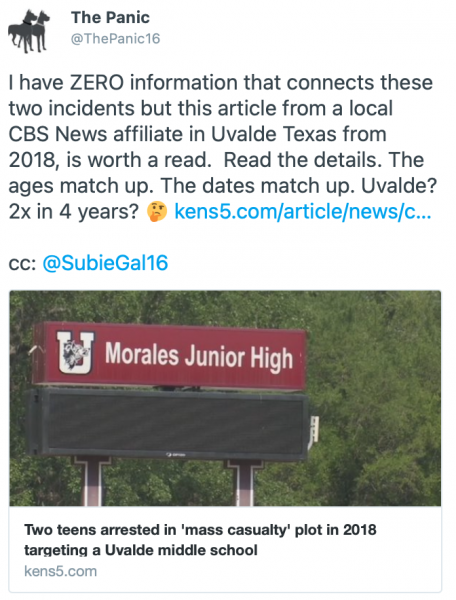 Uvalde might have been yet another “known wolf” situation but we just can’t say for sure yet.

UPDATE: From the comments, the Daily Mail is on this story in a way the US press isn’t yet: Texas Rep. Tony Gonzales says Uvalde gunman was arrested FOUR YEARS ago after telling people he planned to ‘shoot up a school once he’s a senior in 2022.’