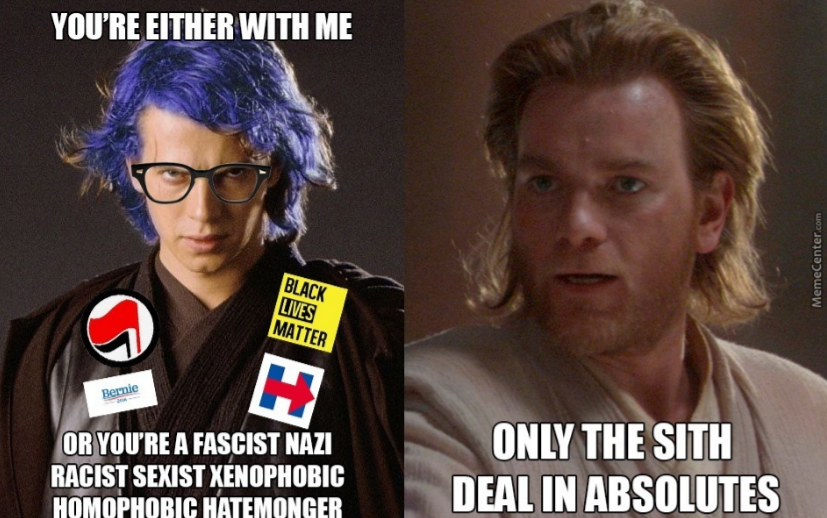 We live in Orwellian times ladies and gents, and this is proof of fact: the New York Police Department charged 9 Proud Boys for getting attacked by the domestic terrorist left-wing group also known as Antifa. The sad state of affairs in progressive America is that you can be charged and sent to prison for merely defending yourself.

Here’s from a Daily Beast article:

The New York Police Department announced that it has enough evidence to charge nine members of the right-wing group Proud Boys and three protesters with various counts of rioting, assault, and attempted assault in connection with a brawl that erupted between the two sides a few blocks from a city Republican club following a speech Friday by Proud Boys leader Gavin McInnes.

Illustrating just how fluid the investigation is, police updated the total number of people they are seeking from 11 to 12 in the middle of a briefing Monday afternoon.

The update from the NYPD came as political backlash over the savage incident continued to grow with City Council members criticizing the department for not doing more in the moment and Gov. Andrew Cuomo calling on FBI and State Police hate crimes task force to assist in the investigation.

The three so-called protesters are Antifa, obviously. The question is, what does the FBI have to do with this incident? A glorified street fight by any metrics? And what hate crimes?

Shea said the Proud Boys left the club around 8:20 p.m. and crossed the street. They were separated from protesters by uniformed NYPD police officers on scooters. The officers forced the Proud Boys south on Park Avenue and 84th Street as the two sides shouted vulgarities at each other.

So, yeah, NYPD allowed the Proud Boys to exit the building, then Antifa attacked them later, when the police was not there. And obviously, when attacked, one must defend himself. Here’s the video:

@ 2:07 you can see down the sidewalk what appears to be 3 black-clad Antifa members walking up behind some Proud Boys. They clearly didn’t know more Proud Boys were rounding the corner behind them. @2:14 you can see the Antifa guys start to swing on the proud boys from behind, which then the rest of the group came running up to defend them.

Also, looking at the video, I see white, Asian, Hispanic, black exiting the club (the door is defaced with an Antifa sign by the way). Clearly the Proud Boys are a white supremacist group. For a bunch of racists, they sure are  pretty diverse though.

So let me get this straight: Antifa threatens to kill Proud Boys as they are leaving the event and follows them away from the event, then physically confronts the Proud Boys, get beat up, and try to play the victim?

Nice try Andrew Cuomo, DeBlasio and the media. Sorry Antifa, you get no sympathy from me.

Antifa are nothing more but a Soros-sponsored domestic terrorist group, just like Black Lives Matter, used by the establishment to attack anyone who doesn’t comply with the mainstream narrative. Antifa are known for showing up at right-wing/conservative events, and their main purpose is to cause violence. And this is not secret by the way, as all these crazy left-wing groups are open about the fact they’re promoting violence and “revolution” by any means necessary. Just read their publications or their websites. Even DEM leaders are known for encouraging violence against Trump supporters, people like Maxine Waters or Hillary Clinton. Antifa are known for decades in Europe for their extremely violent behavior, and they’re now here.

Antifa sing a different tune when they’re on the receiving end. All of a sudden they want peace, civility, respect and even a helping hand from the people they chant are pigs (that would be the police).