National debt levels can be hard to understand, not to mention boring. For example, Puerto Rico is making headlines because it is $74 billion in debt, but the United States is about to reach $20 trillion, and that doesn’t seem like a big deal. How can this make sense, and who cares about all this stuff anyway? We created a new graph to break it down in layman’s terms. 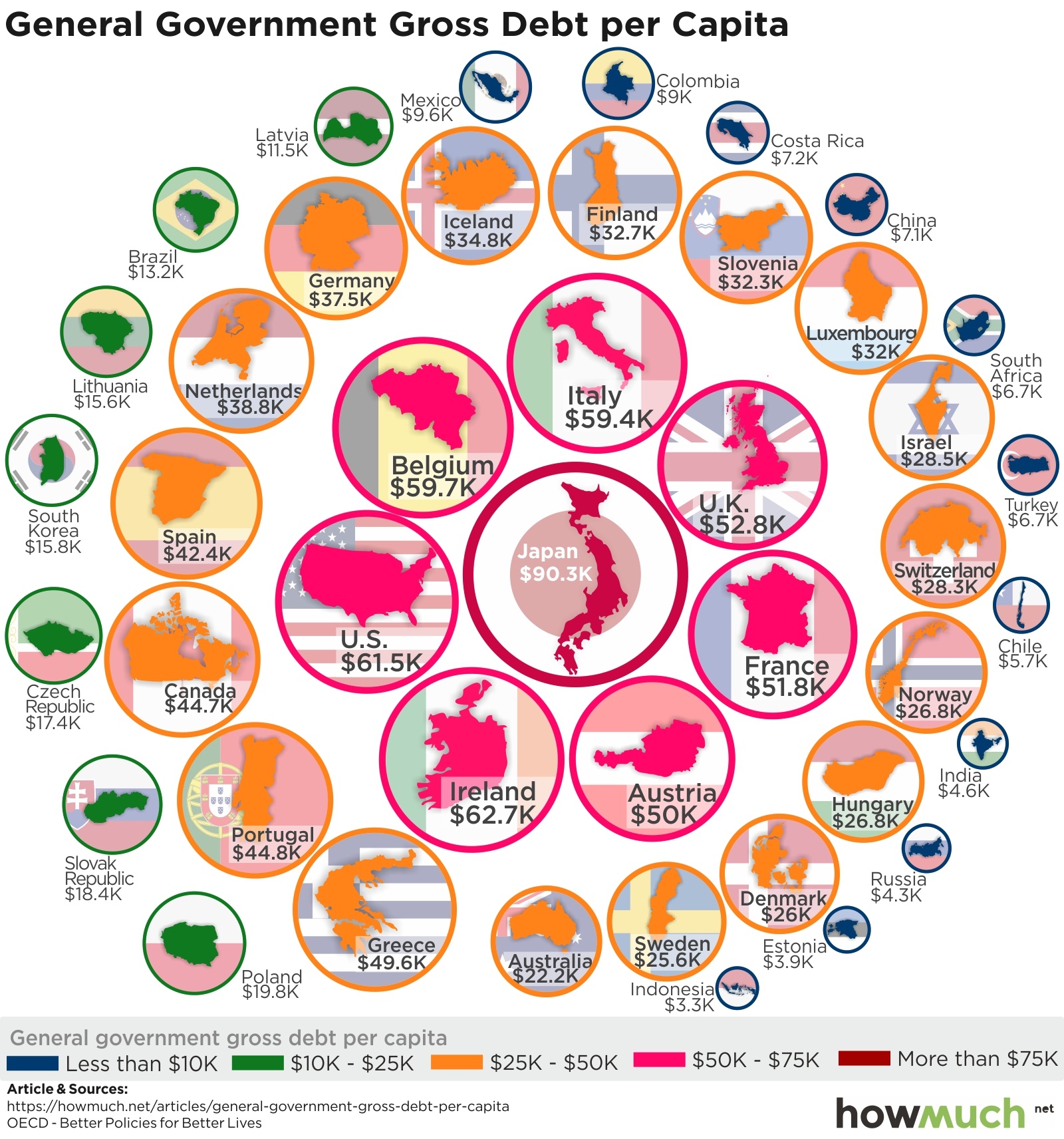 We used new numbers from the Organization for Economic Co-operation and Development (OECD) about per capita national debt. It’s a straightforward metric. For instance, if Americans wanted to completely eliminate their national debt, they would each owe $61,539. We created a series of donut circles: the larger the circle, the higher the per capita debt ratio. We then color-coded each one to correspond with a sliding scale of severity. Dark red means the country is in serious trouble with over $75K in per capita debt, while blue countries on the outside have less than $10K of debt per capita.

Comparing the debt loads of different countries on a per capita basis makes the most sense for a few different reasons. It’s like comparing apples to apples. That’s why the United States can run a $63 billion deficit for the month of October—which barely makes the news on Reuters—but missing $900 million in debt payments from Venezuela causes that country’s entire economy to tailspin. This makes the comparisons between countries fair.

Japan is at the center of our graph because that country has the highest per capita debt anywhere in the world at $90,345. There isn’t a country on earth where average people make nearly that much money on an annual basis. Ireland takes second place at $62,687 followed by the United States in third with $61,539. That’s almost twice as much as the average American taxpayer who files as a single adult makes in an entire year.

Take a look at one country on the far outside of our graph, China. The Chinese government has managed to create so much economic growth (which may finally be slowing down) while only amassing $7,119 in per capita public debt. Granted, China is the most populatedcountry on the planet. That’s still an amazing accomplishment given how much modernization the country has undergone.

Take a look at a list of the top ten countries with the highest per capita debt in the world. Keep in mind that the average for all countries in the OECD is $50,245. And notice how many countries are in Western Europe.

Per capita numbers are always a great way to compare different economies from around the world. It doesn’t matter who you are—if every citizen in a country suddenly became liable for paying an equal share of the national debt, there’d by serious problems. And that’s especially true when an individual’s portion of the national debt amounted to more than an entire year’s salary.