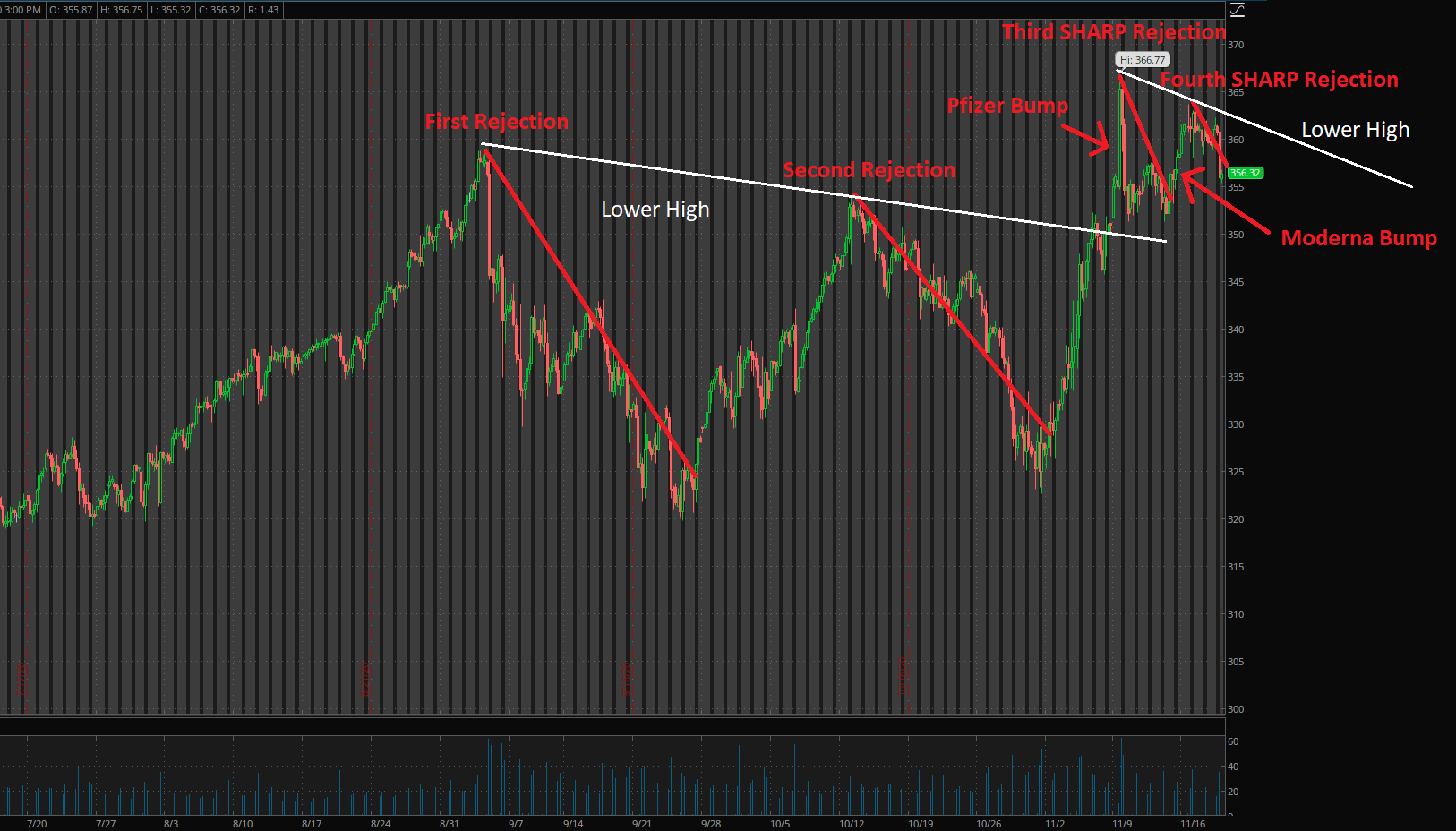 The market is going to tank. Let me just give a bit of background so you know why my opinion is better than yours…

I am not a bear. I am not a bull. I go where the market tells me to go, I bet where it tells me to bet. And right now, the indicators are telling me to take a strong bearish position. So that’s what I have been doing.

I’ve been trading more than 20 years. I was trading the great financial crash while most of you were watching Spongebob or whatever. This is not my primary job, but I make a good deal of cash on the side every month, timing the market and swing trading broad market ETFs. I do my research, I know my shit, and I rarely touch your shitty meme stocks. I’m doing you all a favor of once again sharing my insights into this market, so you too can share in my profits and maybe learn a thing or two.

I will lay this out as cleanly as I can, offering multiple premises for my bearish bet and explaining them in detail. I’ve covered some of this in the past, but wanted to consolidate everything and more in one place. This post will be long. If you want to cry about that rather than thank me for my service, you will go broke soon and deserve it cuz you are lazy. PRESSING FORWARD!

Premise 2: SPY is Topping Off and Running on Vaccine Fumes (TA)

Premise 6: Banks are Loading Up on Safe Bonds While Retail Loads Up on Stocks (Data)

Premise 1: The Market is Massively Overvalued

There are plenty of small, detail arguments for a bearish position. Covid cases rising, election uncertainty, stimulus failing, and so on. Plenty of others have made this case, so I won’t focus on the small scale issues such as these.

What I want to give you is a larger, macro picture. Because the market is simply overvalued, period. The market has become divorced from the overall economy. I understand tech, and why they have a bullish case for growth in the face of Covid lockdowns… My point here is that you need some REAL WORLD measures to tie “future earnings” down to reality, to prevent irrational euphoria from taking over your mind.

There are plenty of indicators out there showing that stocks are overvalued. We could talk about insane P/E ratios, about euphoric meme stock flops like NKLA, and so on. The metric I’m going to present here is not new by any stretch. It isn’t unique or original. But it is undeniably useful, and carries strong weight, whether modern traders wish to shun it and its originator or not. I’m talking about the Buffet Indicator.

For those of you new to this concept, it is simply the total stock market valuation divided by GDP. The point is to compare total market valuations with some hard, trailing, real-world metric, in this case GDP. When market valuations uncouple strongly from actual market conditions, it is a strong signal of irrational stock valuations. And that presents opportunity for those paying attention.

Note that this chart has already been detrended down to account for historically rising P/E ratios, and it still shows a strongly overvalued market, equal to what was seen during the DotCom bubble. That’s bad news, folks.

This is the REAL issue in the present market, and why buyers are becoming exhausted. Covid, instability, elections, stimulus… These are all just catalysts to give that equity bubble a little prick. Only the dumbest of the dumb are still “buying the dip” under current market conditions, which means mostly clueless retail gamblers on WSB. All these perma-bulls are doing is offering liquidity to the institutional investors to help get them out of their positions. In the end, we all know who is left holding the bag.

Premise 2: The Market is Topping Off and Running on Vaccine Fumes

I’m not a big believer in technical analysis. Most of it is bullshit, astrological voodoo if you ask me. But some of it works, and when technical analysis works, it is simply being used as a proxy for assessing market sentiment and emotions. Let’s take a closer look at the teaser SPY chart I posted above.

As you can see, the market has been repeatedly rejecting multiple new highs. This process was briefly interrupted by positive vaccine news. We breached a new high on Pfizer vaccine results, but even that new high was instantly rejected and resulted in a sudden reversal selloff. The Moderna vaccine news created another short rally, lower than the Pfizer high, and that too was followed by a selloff. In other words, the market is continually rejecting current market valuations. As they should be, if you were following the point above. We are running on vaccine news fumes, and those will not last long. If you develop an instinct for these things, you can almost feel it in your gut: The market WANTS to head down.

If this isn’t the top, it is close to it. $366.77 will very likely be the high for SPY for the year, and will soon unwind downwards.

I know this will come as a shock to most of you idiots but the money printer does NOT GO BRRRRR.

The Fed has to follow the laws that govern it’s actions. The Fed does not have the legal authority to simply print cash and hand it out. Go ahead and read the Federal Reserve Act, and take a look at the Fed’s actions, for proof of this. It doesn’t even have the authority to print cash to buy corporate bonds or anything else.

What the Fed “prints” is called “reserves.”

So what, you say? So everything. The key point about reserves is that they cannot be spent like cash can. When a bank gets reserve funds in its reserve account at the Fed, it CANNOT SPEND that money. All the bank can do is use that account as collateral to lend against. Which means if the banks are not lending, those QE funds are NOT entering the economy. They might as well not exist. And banks are not lending, as we will see below.

Just think about it. If Fed actions and QE really made stocks rally the way people claim it does, why isn’t the Japan Nikkei constantly breaking new all time highs???

Quantitative Easing is not Cash. In fact, QE is deflationary.

Here is how QE works, in a nutshell. The Fed buys bonds from the big banks. Except the Fed isn’t buying them with cash. In exchange for the bonds, the Fed puts funds in a reserve account held by the bank. These reserve funds CANNOT BE TOUCHED by the banks. All the banks can do is use this account as collateral to lend against.

In fact, it’s worse than that. Because the Fed is removing assets from the open market, and not paying cash for them. It is purchasing liquid assets with illiquid reserves. Despite all the Fed’s talk about “creating liquidity,” what the Fed is actually doing is REMOVING liquidity from the system!

Why would they do this? Answer: To lower interest rates. Don’t take my word for it, the Fed explains this itself!

See, the Fed has to follow the laws that govern its actions. Despite what the public believes, the Fed does not have the legal authority to simply print money and hand it out. The Fed knows that the true source of inflation in a debt-based economy is through credit expansion. So the Fed does everything it can to reduce interest rates, both by setting reserve rates near zero and by using QE to drive rates down further.

Only when credit expansion revives will we begin to see inflation and a true recovery. The Fed knows their hands are tied, which is why they keep hammering Congress to pass more stimulus.

Perhaps the greatest strength of the Fed is in “forward guidance.” The Fed simply uses words to convince the public that money is being printed, that inflation is coming, so that people go out and spend and buy assets. They are playing a trick on the public, and the trick is working. People actually believe inflation is coming, that stocks are being held up by the Fed, that money is pouring into the system. The public is wrong on every count.

The question of whether banks are lending or not with their QE reserves is simply a matter of looking at the data. Practically every data source we can point to suggests contracting credit conditions. This means QE reserves are not entering the economy, and therefore are not producing inflation nor holding up stocks.

Real Estate lending is booming, you say? Not so….

Note: The decline near the end doesn’t represent growth in credit, but represents a reduction in the RATE of tightening.

Consumer Demand for Loans is SHRINKING:

Premise 6: Banks are Loading Up on Safe Bonds While Retail Loads Up on Stocks

If you are like me, you look forward to the H.8 data every Friday from the Fed (yeah right haha). A continuing trend in that data, month after month after month, is that major banks in the US have been loading up on bonds with no end in sight. They are piling more and more cash into safe assets, now up to a whopping $4.6 TRILLION in securities.

Meanwhile, retail traders (that means you) keep piling into stocks at all time highs. A record amount of cash was dumped into the market after the vaccine news breaks. I’m just gonna go ahead and call it now. This is the top.

I bring this up just to reiterate another real-world metric that is gloomy and yet completely ignored from market valuations. Why are stocks breaking all-time highs when we still have MILLIONS more unemployed than we did this time last year? Hello McFly?

Shit’s f*cked up son. Real world economy is still in shambles. Market is more overvalued than it was during the DotCom boom. Still millions unemployed. The market is topping off and rejecting highs again and again. The Fed is not printing money and not backstopping assets, despite claims to the contrary. We are heading down, folks!

Also anything else that strikes your fancy. IWM, GLD, SLV puts are all fine (dollar is going to rise). Longer dated TLT calls will print as well due to QE reducing bond yields, eventually. Go longer or shorted dated depending on personal risk tolerance.

Timing can be difficult. My strategy is to periodically enter bearish positions when short-term indicators look good, and hope to eventually time the major dump. If things begin to stabilize short-term I exit the position quickly with a small gain or, rarely, a small loss.