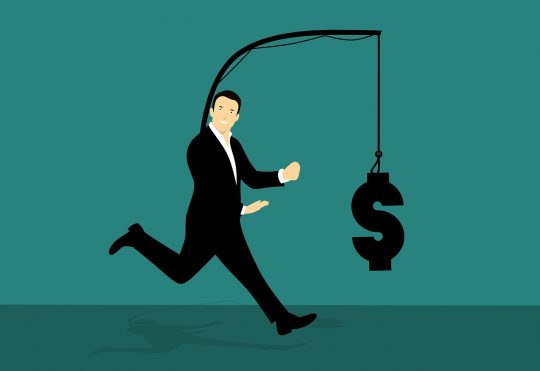 Since the last recession, nonfinancial corporate debt has ballooned to more than $9 trillion as of November 2018, which is nearly half of U.S. GDP. As you can see below, each recession going back to the mid-1980s coincided with elevated debt-to-GDP levels—most notably the 2007-2008 financial crisis, the 2000 dot-com bubble and the early ’90s slowdown.

You can see the chart they are talking about right here, and it clearly shows that each of the last three recessions coincided with the bursting of an enormous corporate debt bubble.

This time around the corporate debt bubble is larger than it has ever been before, and risky corporate debt has been growing faster than any other category…

Through 2023, as much as $4.88 trillion of this debt is scheduled to mature. And because of higher rates, many companies are increasingly having difficulty making interest payments on their debt, which is growing faster than the U.S. economy, according to the Institute of International Finance (IIF).

On top of that, the very fastest-growing type of debt is riskier BBB-rated bonds—just one step up from “junk.” This is literally the junkiest corporate bond environment we’ve ever seen.

Needless to say, the stage is set for a corporate debt meltdown of epic proportions.

READ  What to Consider Before Developing an Investing App

What makes this debt bubble even worse is the way that our big corporations have been spending the money that they are borrowing.

Instead of spending the money to build factories, hire workers and expand their businesses, our big corporations have been spending more money on stock buybacks than anything else.

Every year, publicly traded corporations spend hundreds of billions of dollarsbuying back their own stocks from shareholders, and much of that is being done with borrowed money.

Sadly, both corporate behemoths are now absolutely drowning in debt as a result of their foolishness.

In the final analysis, borrowing money to fund stock buybacks is little more than an elaborate Ponzi scheme.  In their endless greed, corporate executives are cannibalizing their own companies because it makes some people wealthier in the short-term.

And now this giant corporate debt bubble has reached a bursting point, and there is no way that this story is going to end well.

Meanwhile, another financial bubble of epic proportions is also getting a lot of attention these days.  If you are not familiar with “shadow banking”, here is a pretty good explanation from CNBC…

Nonbank lending, an industry that played a central role in the financial crisis, has been expanding rapidly and is still posing risks should credit conditions deteriorate.

Often called “shadow banking” — a term the industry does not embrace — these institutions helped fuel the crisis by providing lending to underqualified borrowers and by financing some of the exotic investment instruments that collapsed when subprime mortgages fell apart.

This kind of lending has absolutely exploded all over the globe since the last recession, and it has now become a 52 trillion dollar bubble…

In the years since the crisis, global shadow banks have seen their assets grow to $52 trillion, a 75% jump from the level in 2010, the year after the crisis ended. The asset level is through 2017, according to bond ratings agency DBRS, citing data from the Financial Stability Board.

Who is going to pick up the pieces when a big chunk of those debts start going bad during the next financial crisis?

Never before in human history have we seen so much debt.  Government debt is at all-time record levels all over the world, corporate debt is wildly out of control and consumer debt continues to surge.

A system that requires debt levels to grow at a much faster pace than the overall global economy is growing to maintain itself is a fundamentally flawed system.

But that is what we are facing.  If global debt growth fell to zero, the global economy would instantly plunge into a horrific depression.  The only way to keep the game going is to keep expanding the debt bubble, and the larger it becomes the worse the future crash will be.

Most of us have been in this system for our entire lives, and so most of us don’t even realize that it is possible to have a financial system that is not based on debt.  This is one of the reasons why I get so frustrated with the financially-illiterate politicians who insist that everything will be just fine if we just tweak our current system a little bit.

No, everything is not going to be just fine.  In fact, we have perfectly set the stage for the worst financial meltdown in human history.

At this point nobody has put forth a plan to fundamentally change the system, and there is no way out.

All that is left to do is to keep this current bubble going for as long as humanly possible, and then to duck and cover when disaster finally strikes.