Inconvenient Science: NASA data show that global temperatures dropped sharply over the past two years. Not that you’d know it, since that wasn’t deemed news. Does that make NASA a global warming denier?

Writing in Real Clear Markets, Aaron Brown looked at the official NASA global temperature data and noticed something surprising. From February 2016 to February 2018, “global average temperatures dropped by 0.56 degrees Celsius.” That, he notes, is the biggest two-year drop in the past century.

Have you heard this on CNN? BBC? No news service picked up this article because the game is rigged, the mass media is fake news.

Its NASA data, I’m just telling you about it.

The aftermath ofthe 2015 El Nino was a steap drop in surface ocean temperatures. Here is a chart that show the extent of the drop:

See also  MARK JUDGE: Breaking Up With Carl Bernstein and the Communist Media. 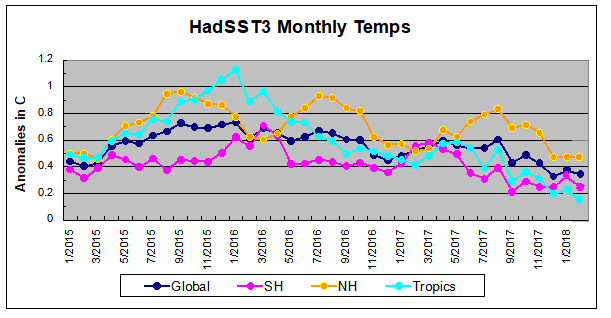 Because air temperatures follow sea surface temperatures the last two year have seen a drop of .56 degrees, here at the best temperature measure, the satellites at the University of Huntsville:

We are now at only .21 of a degree Celsius from the 30 year average, well within the margin of error.