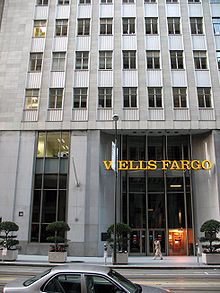 Wells Fargo fails US bankruptcy test for a second time
The Federal Reserve and Federal Deposit Insurance Corporation said that Bank of America, Bank of New York Mellon, JP Morgan Chase, and State Street, whose living wills were also deemed deficient in April, had now adequately addressed their shortcomings. But Wells Fargo had failed to do so.
www.bbc.com/news/business-38309520

How many whistle-blowers did the Feds ignore? In the Wells Fargo case about 700.

The nation’s top banking regulator identified problems with Wells Fargo’s sales practices as far back as 2010 but failed to take timely action to halt the abuses that ultimately exploded in scandal six years later, a new government report says.
Compiled by two divisions of the Office of the Comptroller of the Currency, the internal report posted online Wednesday said the federal regulator “missed opportunities” to launch an earlier and deeper investigation of complaints that Wells Fargo sales incentives pushed employees to open accounts that may not have been approved by customers.
Nonetheless, it wasn’t until September 2016 that the OCC, the Consumer Financial Protection Bureau, and Los Angeles city attorney’s office hit Wells Fargo with $185 million in penalties for secretly opening more than two million deposit and credit card accounts without customer approval. An estimated 5,300 employees were fired during a five-year period for their involvement with the practices.
There were multiple red flags and missed signals at the OCC for years, the bank’s main regulator, the report said.
Most tellingly, bank examiners assigned to review Wells Fargo were aware of approximately 700 whistle-blower complaints related to “gaming of incentive plans” when they met with senior managers of the San Francisco-based bank in January 2010, the report said.
Carrie Tolstedt, who at the time headed the community banking division that was ground zero for the scandal was dismissive of the complaints, attributing them to a corporate culture that encouraged valid claims “which are then investigated and appropriately addressed,” the report said. Tolstedt also said the bank’s sales incentive programs were capped at 10% to 20% of bank workers’ total compensation “to keep motivation in check.” Tolstedt no longer works for the bank and has had to give back millions in compensation in connection with her role in the scandal.
www.usatoday.com/story/money/2017/04/20/feds-found-sales-issues-wells-fargo-early-2010/100688602/

Fired Wells Fargo employees say they were made scapegoats in mortgage scheme
A group of fired Wells Fargo Home Mortgage employees are suing the company, saying they were made the scapegoats for an illegal practice encouraged by higher-ups.
The nine employees, who are residents of New Jersey and Pennsylvania, worked as home mortgage consultants for Wells Fargo and were terminated in 2015.
They allege the company violated federal regulations to boost business by obtaining referrals of potential mortgage customers from a real estate title firm and in turn referring its mortgage customers to that title company for closing services. The practice went on from 2009 through 2012, when Wells Fargo was sued.
Rather than end the practice, the company went on to commit the same violations with another title company, Patriot Land Title, which is headquartered in New Jersey, according to the new suit.
The federal Consumer Protection Finance Bureau and the State of Maryland sued Wells Fargo and J.P. Morgan Chase Bank in 2015, alleging the practices violated the Dodd-Frank Wall Street Reform and Consumer Protection Act of 2010 (known as the Dodd-Frank Act).
www.nj.com/gloucester-county/index.ssf/2017/04/wells_fargo_employees_claim_wrongful_termination_o.html

6 thoughts on “Wells Fargo is BANKRUPT?! The bank fails US bankruptcy test for a second time!”