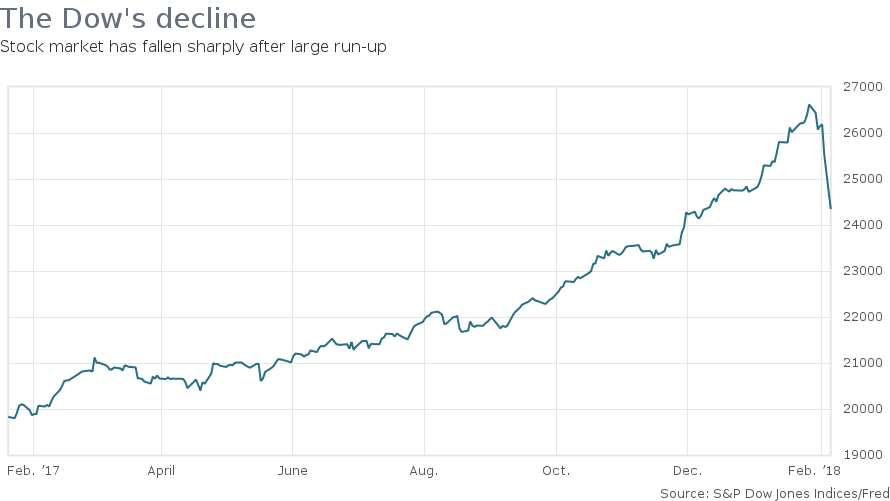 Is the honeymoon over?

“I’ve lost $4 million, 3 years worth of work, and other people’s money,” he wrote in a post that’s garnering lots of attention. “Should I kill myself?” cc @NewYorkFed $XIV pic.twitter.com/QruzKUq8Uh

Chart of the Day: Risk Happens…..Sometimes Of A Sudden!

Liquidity is finally drying up, and volatility will be the new watchword for 2018

The outlook for 2018 that we issued to clients in December pointed to liquidity, just as it had for years. But this time the report suggested that the number of buyers versus the number of sellers in 2018 would no longer be strongly skewed in favor of buyers, as it was as recently as December.
A relative parity between buyers and sellers in a normal market opens the door for volatile market conditions from time to time, and that is exactly what we expect to happen in 2018.

Deja vu? It’s looking like 1987 again for the US economy

Central banks did enough in 2008-09 to prevent the collapse of capitalism. The coming period will show whether that breathing space was used to make good the structural weaknesses exposed by the crisis: debt dependency, rising inequality, under-investment. If that is the case, last week will indeed just have been a wobble.
But that’s not really the way it looks, and Donald Trump was perhaps tempting fate in Davos when he boasted that the stock market was constantly smashing records as a result of his economic stewardship.
Trouble tends to arrive quickly for new Fed chairs. With Greenspan it was within two months. For his successor Ben Bernanke, it was 18 months before the sky fell in. Powell would be well advised to brush up on how to handle a financial crisis.

For anyone that has studied the sequence of events leading up to the GFC of 2008-09, it isn’t hard to put together the shape of the new crisis.

The Treasury is set to borrow nearly $1 trillion this year, and at least …

CNBC
The Treasury quietly released data showing it would need to borrow $955 billion in 2018, and more than $1 trillion in the two subsequent years. … “Although the overriding consideration of the Treasury during the recession and recovery was simply funding the trillions in new debt, the low and declining average and …

Bloomberg
The masked discrepancy between leverage and defaults is so wide that the recent pick-up in corporate earnings and financial metrics — especially thanks to tax reforms in the U.S. — “won’t be enough to offset” the significant credit risks, S&P said. “When debt is this steep and default rates are low, …
793 views